Well, what an exceedingly lovely week! We’ve seen two new countries – Malaysia and Singapore – and we’ve done so with Harry (my little brother) and Ting (his fiancée) who is from Singapore. We also spent an afternoon catching up with my cousin Tim, his Australian wife Laura and their daughters Elsie (2) and Amelie (a few months old) who were stopping off in Kuala Lumpur to break up their long journey from Australia to the UK.

It’s hard to explain how wonderful it was to see some familiar faces after three and a half months of only occasional conversations with a few very pixelated relatives and friends! I suppose we didn’t ‘do’ an awful lot but it was great to be able to chatter away about things with people who didn’t ask where we’re from (England…no, not London, Derby…it’s near Nottingham?…Manchester?…yes Manchester United…yes, Wayne Rooney…), where we’ve arrived from and where we’re headed next!

We met Harry and Ting in Melaka, a UNESCO World Heritage city, south-west of Kuala Lumpur. They came bearing gifts which, even though we knew exactly what they were (lightweight giant hamman towels from my parents), it was very exciting as they were wrapped in Christmas paper! We also received our requested goods: a little jar of marmite, some dolly mixtures and alcohol gel for me, and M&S honey roasted cashews and some camera stepping rings for Dean!

Our time in Melaka was spent wandering around the historic sites – fort ruins, colonial buildings, a Dutch clocktower, an old Portuguese church and, my favourite, a museum which was a traditional Peranakan townhouse kitted out as a 19th century Baba-Nonya residence.

This was on a grave stone at the church perched on a hill over-looking the city.

An example of the main tourist mode of transport, they’re all decorated with flowers, cuddly toys, neon lights and blare out loud pop music! I chose this one to photograph in honour of my goddaughter,  Gracie, who is a big fan! Needless to say, we walked!

These are some very pricey chocolates: I wonder if they show anything about our personalities?! 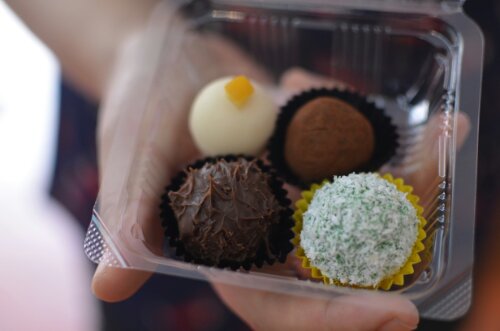 We sampled lots of Chinese, Malay and Nonya foods in restaurants and from street vendors, largely suggested by Ting. The first picture is of potato tornadoes which are like one giant spiralled crisp. Then there’s something I can’t remember the name of which tastes like bonfire toffee and is so sugary you can almost feel it rotting your teeth! The third picture is of our tasty Chinese meal of roasted chicken, bbq pork, rice, pork wanton soup and beansprouts.

On our second evening, we took a river cruise which was interesting but rather odorous!

This stage was set up at one end of Chinatown (presumably sponsored by Man U?!) so that individuals can pay money to stand up in front of a seated crowd and passers-by and sing kareoke! Bizarre!

Malaysia’s capital is a sprawling modern city of sky scapers, fast food and shopping malls. Although an Islamic state, it is a melting pot of religions and nationalities. It’s dirty, bustling and not very pedestrian-friendly. I wasn’t a big fan but I did love the iconic Petronas Towers, briefly the tallest buildings in the world.

Fortunately our focus was more on socialising than sight-seeing. As, I said, this is where we met Tim and family. This is Elsie.

After a lunch of Malay food in an enormous mall, we somehow all piled into a taxi and headed over to the Masjid Negara (National Mosque). It was very modern and pleasingly geometric. We all (except Dean for some reason) had to don all-covering robes but unfortunately were only able to stay a few minutes as it was closing for prayer time.

The plan after this was to embark upon a Dean-guided walking tour but the weather had other ideas. We ignored the rain to begin with, appreciating the refreshing coolness it brought. But it soon became torrential, flooding the roads and accompanied by thunder and lightening. So we gave in and crammed ourselves, much more frantically this time, into another taxi, and installed ourselves in a mall coffee shop to dry off. 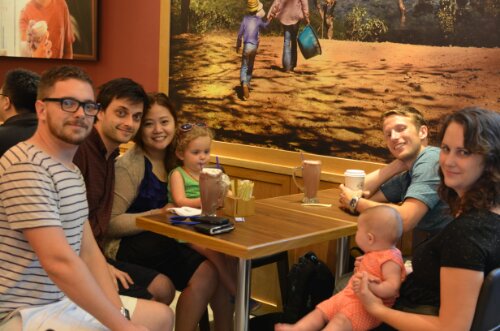 After Tim and Laura’s departure, we had dinner then Harry (affectionately referred to as ‘pudding boy’ when we were kids) had the biggest icecream cone any of us had ever seen! After Eight and Oreo flavours I believe!

Harry and Ting’s hotel featured a Skybar on the 33rd floor which is renowned for one of the best views of the Petronas Towers so we headed up there to admire it.

I couldn’t resist a few more snaps as we walked home! 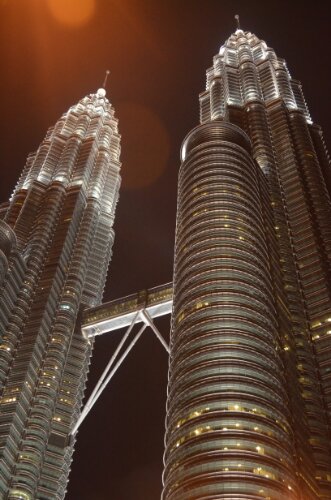 We had a frustrating bus journey down to Singapore whilst Harry and Ting did the sensible thing and flew! It was great to have tour guide (and taxi driver) Ting, and to a lesser extent Harry, showing us round. It’s a country of extremes: scruffy migrant workers crowd on the back of pick-ups while most of the country live lives of luxury; amazing architectural creativity sit alongside weekly hangings at the prison; families steadfastly uphold traditional values while almost every other face seems to be an expat; kids compete for the best schools from an early age while the adults they will one day become are steeped in stress. Obviously it’s very different to any other country we’ve visited so far and it was great to get a glimpse of it from the inside out. 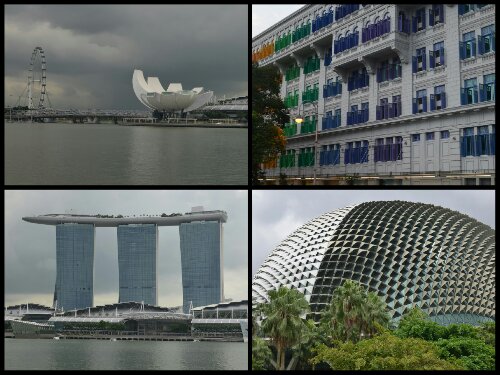 I think the mer-lion is Harry’s favourite part of Singapore so we paid it a visit after looking at an amazingly grand wedding venue with them! 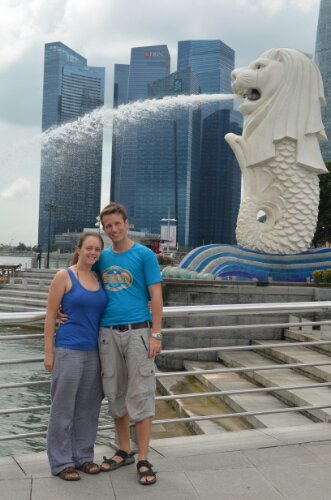 We had lunch in this hawker’s market.

After this we attempted the national sport: shopping! I’m not sure anyone knows how many malls there are in Singapore but there are loads. Ting selected a tech-y one for us so we could spend our Christmas money on a camera which can go under water. Yes, another camera! We plan to do lots of scuba diving and snorkelling with it throughout the remainder of the trip. Ting helped with the haggling and I was also able to replace my camera  rucksack (comparing them side by side assured me the first was a fake!).

Before we parted ways, we made a quick stop off at Ting’s parents’ beautiful house where we met her mum and were given a tub of delicious Chinese New Year cookies!

It was strange to think, as we said goodbye to Harry and Ting, that those are probably the last familiar faces we will see for another 6.5 months! We miss them already but are excited that we will be returning to Singapore this time next year for the wedding!

We’ve now reached Borneo where we will spend the next 2.5 weeks. I’m very excited at the prospect of seeing orangutans, probiscus monkeys and pygmy elephants!

I shall leave you with an example of a sign, commonly displayed in hotels and public transport, relating to the world’s smelliest fruit! 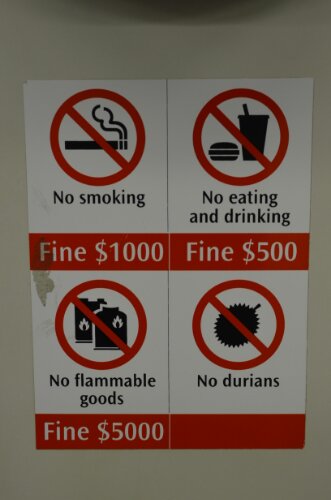