From Palenque we travelled to Campeche, an aesthetically pleasing (streets of terraced houses all painted different colours) but very boring town with hardly any restaurants and even the only museum was closed for refurbishment! 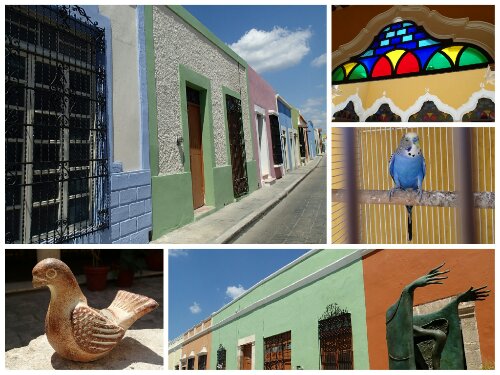 Our next stop was a more lively town called Valladolid. Here we enjoyed several nice meals out and experienced our hottest days so far at 38°C! Unless you take a long day trip from one of the tourist hotspots like Cancun or Playa del Carmen, this is the place to base yourself to visit Chichén Itzá, arguably Mexico’s most famous destination. So that’s what we did, courtesy of our wedding gift from Phil and Julie Maddever, thanks very much!

Although a settlement had been on the site since the 5th century and had passed from one ruling group to another, it is famous for its expansion whilst being ruled by the Toltecs/Itzáes (I can’t figure out if these are synonyms or if one is a subgroup or how they fit with Mayans!) from about 1000 to 1200 AD. In 1220, Mayapan warriors conquered the city and in 1533 fought the Spanish. Less than fifty years on, the Spanish prevailed and turned Chichén Itzá into a cattle ranch.

The iconic sight of El Castillo, or The Kukulkan Pyramid, looms 75 feet over the main plaza and is dedicated to the feathered snake god (Kukulkan to the Mayans, Quetzalcoatl to the Aztecs). When visiting these historic places, I like to try and picture the inhabitants of the day; in this case the plaza would have been filled with warriors, priests, pilgrims and merchants. 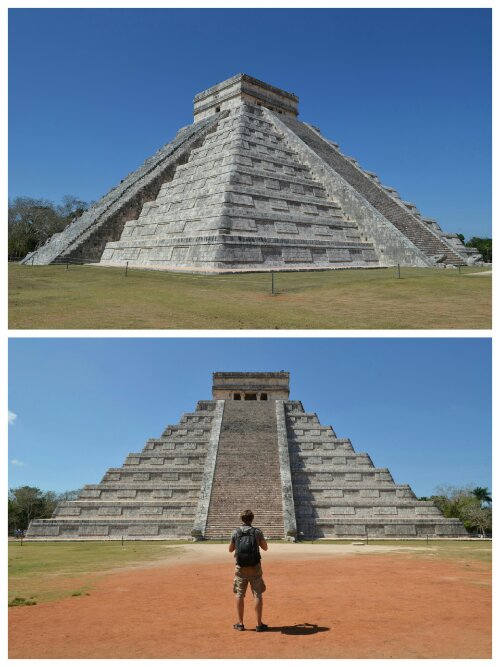 The whole pyramid is actually a very big astronomical calendar. Each of the four staircases has 91 steps which, when added to the top platform, make the 365 days of the solar year. On each side, each of the nine levels is split in two by a staircase representing the 18 months of 20 days of the Maya Vague Year. Each facade has 52 flat panels symbolising the number of years in the Maya Calendar Round. 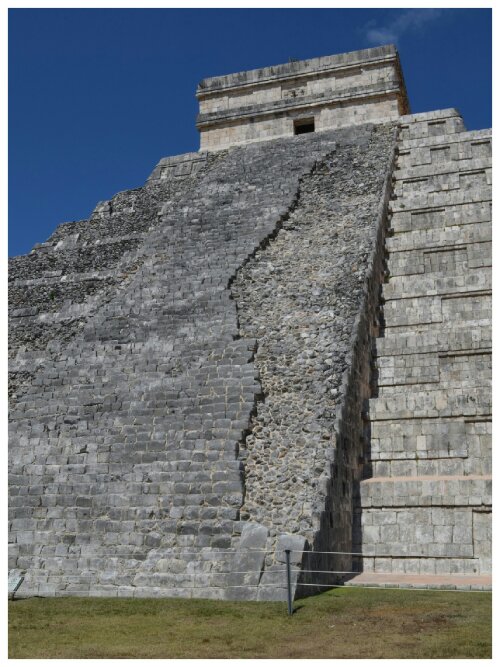 But the cleverness doesn’t stop there with this temple. At this time of year, during the vernal equinox (and the autumnal one), as the sun sets, it creates the illusion of the body of a serpent roughly 37 yards long that creeps downwards until it joins the huge serpent’s head carved in stone at the bottom of the stairway. It is said to symbolise Kukulkan slithering down the pyramid, returning to Chichén Itzá. Although it was the right time of year, we were there at the wrong time of day to see the phenomenon so I’ve done a bit of a mock up for you!

Next we saw the ball court. I wrote a bit about these last week so I won’t repeat myself. This court was particularly huge and still retained the stone hoops which the ball had to be hit through. Although too worn to show in a photograph, all the way round this court were carvings of beheaded players!

Which leads nicely to the next gruesome structure, the platform of the skulls. The heads of the ball court’s victims, plus war captives and human sacrifices, were displayed (and rotted) here! 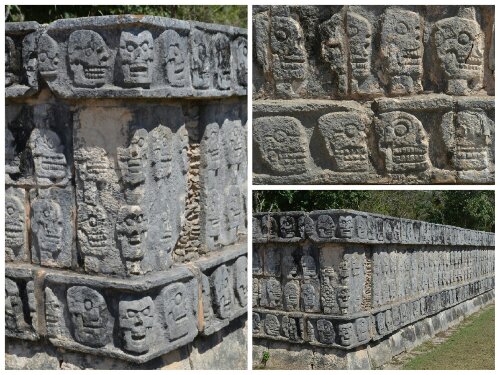 The next platform is that of the jaguar and eagle warriors where the carvings depict these beasts devouring human hearts. Mayan warriors considered these creatures so important that they wore jaguar skins and eagle feathers to absorb their power when going into battle. 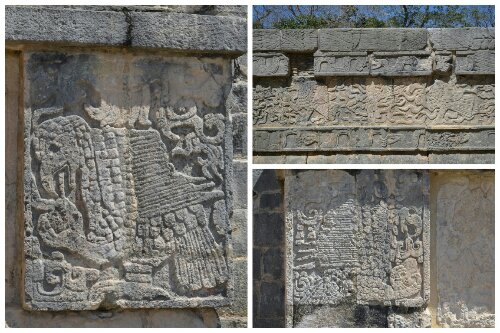 A unique geographical feature of Mexico is its cenotes; naturally formed freshwater pools which form entrances to underground rivers. You can swim in some (though we didn’t) but you wouldn’t want to take a dip in this one as archaeologists discovered over 4000 ritual offerings of jade, gold, amber, ceramics and human skeletons! It was so important that the city was named after it: Mouth of the Well of the Itzáes. Historians believe cenotes were considered entrances to the underworld, Xibalba, and the home of the rain god Chac, hence the offerings.

There were other notable buildings after this but I’m just going to mention those I have pictures for. This building is named El Caracol (The Snail) because of its internal spiral structure, and is an observatory built in the 9th century AD from which Mayan astronomers observed the night sky. They developed a complex understanding of celestial events that suggests the Maya were astronomical, mathematical, and architectural geniuses. The windows align with compass points meaning that, in the absence of telescopes, the Mayans could use them to frame and study the appearance and movement of the planets, the sun, and other stars. 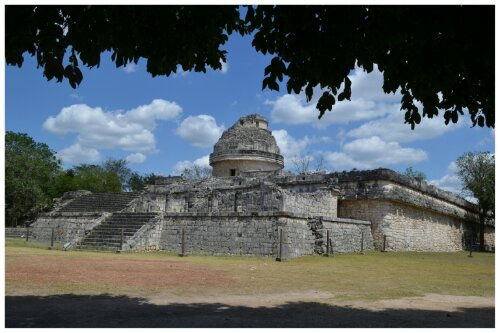 This is part of what the Spanish termed La Iglesia (The Church) because they didn’t know what it was and thought it looked a bit like churches back home. The elphant trunk-like parts are the noses on masks of the rain god, Chac. Shown on the right below.

I can’t remember what the bottom left ruins were bit the top left is the pyramid El Osario or the High Priest’s Grave where lots of human and animal bones were found as well as other offerings. A stone shaft descends through the center of the pyramid to its base, where a 36-foot deep cave begins. The pillar on the right of the photo was one of four which used to stand on top of the pyramid.

All this history stuff is very well and good but the highlight of the day for me was actually the fact there were iguanas roaming about everywhere! Wild but it was possible to creep up on them sometimes!

After three nights in Valladolid, it was onward to Tulum where we stayed in our most unusual accommodation yet: a concrete tube! 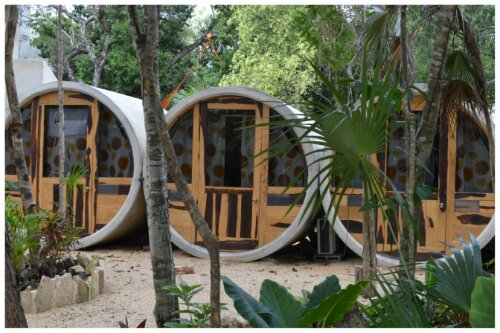 Whilst there, we also encountered the Caribbean Sea for the first time and visited another historical site. In contrast to Palenque’s jungle setting and Chichén Itzá’s parched soil, Tulum was on the coast and surrounded by palm trees. 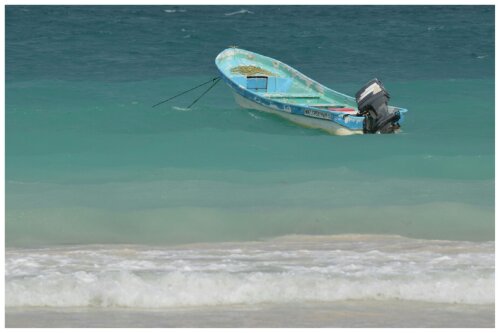 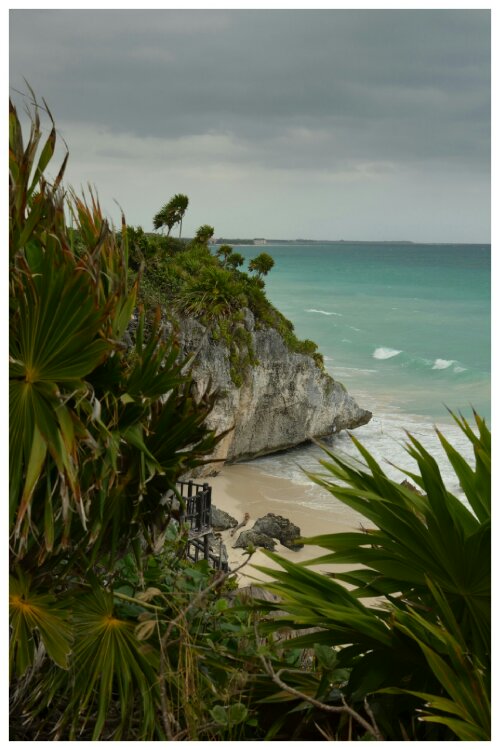 As well as more iguanas, there were quite a lot of birds about (including pelicans!). My photographs really don’t do them justice but you get the idea. 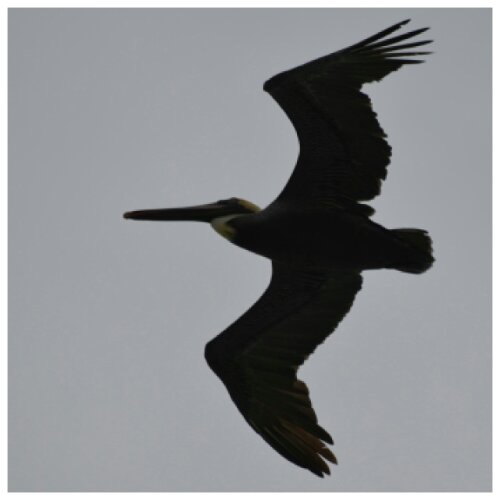 Our last Mexican stop was Playa del Carmen, a very developed tourist destination for a change with a beautiful white sand beach and crystal clear blue water. In case you didn’t see on Facebook, we also had our first upgrade of the trip to an amazing apartment. We were very excited about seeing an oven for the first time in 6 months (!) so we cooked a roast dinner! Deeeelicious!

We’ve also spent a huge amount of time over the last couple of weeks trying to concoct an itinerary for the rest of the trip to enable us to calculate when to buy flights from Panama to Ecuador. Concluding we really need another couple of months to do everywhere justice, we have had to accept we will only touch the surface of the South American countries on the list. For anyone who likes to know where we are, here are our new dates…ish.

As you can see, we’re in Belize now – a very different land – but more about that next time.