We’re fine. So seem to be our surroundings. And that almost makes posting this blog pointless. But I wrote it bit by bit as predictions and emotions were happening and changing so maybe it will be of interest to some.

FRIDAY
There’s a constant breeze and, cycling out to the beach, we noticed lots of people filling sandbags and hauling them up onto their tin roofs. At one point we saw a man on a motorbike pull up at the side of the road and be immediately swarmed by people clamouring for the empty sandbags he had brought.

It’s become apparent that we (in Hoi An) are directly on the projected path of the centre of the typhoon when it makes landfall in Vietnam. Because the time of landfall and the exact route can’t be given with certainty, we’ve made the decision to stay in our current hotel, about 4km from the coast, rather than risk being on a bus or in a less sturdy structure at the wrong time.

My internet research suggests that, what is a category 5 typhoon in the Philippines, should have reduced to a category 3 by the time it reaches us. As far as I can work out, this is defined as ‘very destructive’ winds: >64 knots or 12 (the highest) on the Beaufort scale which is a hurricane. Roof and structural damage can be expected, as well as power cuts.

SATURDAY
People remain calm but have stopped their daily activities to focus on protecting themselves and their property from the typhoon. Some methods we saw as we wandered earlier: strips of tape over windows; large potted plants laid on their sides; wood or metal poles attached across the front of shops; branches cut down from trees and wooden struts propped up against them for stability; reinforcement of fixings holding shop signs and other things which couldn’t be taken down; people pinching sand from building sites; ATMs removed; boats secured to concrete blocks with lots of ropes; lanterns taken down and plants moved indoors at our hotel. Lots of restaurants and shops, particularly along the river are closed. The people doing nothing are the most concerning because if they don’t secure their roof panels and pots and signs and so on then they could do someone some serious damage if Philippines news reports are anything to go by. 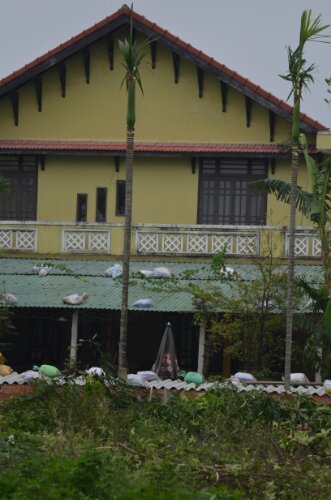 On the news we read that 200,000 people were being evacuated from the area between the provinces of Da Nang and Quang Ngai. There’s been no advice for tourists on what to do and we haven’t met anyone with enough English to discuss it with. It’s kind of a strange situation because many local people depend on tourists for their livelihoods but, in a situation like this, they will naturally switch their priorities to looking after their families and homes, consequently leaving tourists to fend for themselves where food and safety are concerned. We’re fortunate to be in a reasonably sizable and well equipped hotel here but there are many places we’ve stayed on this trip where we would have felt much less safe and where, if everything closed, we’d have been a bit stuck for sustenance!

So, we’ve moved to a ground floor room in the hotel which is quite sheltered and has metal bars at the window and a man came in to bolt the opening windows closed this morning. We’ve stocked up with provisions: some pot noodles and some junk food in case there’s a power cut and we can’t use the kettle. (The only alternative to freshly served up food here is whatever you can buy in a little mini-mart or we would have bought some ‘proper’ food, honest!) The restaurant still seems to be functioning and it appears that at least 6 other rooms on this floor are in use (there’s a light outside the door when you’re in) suggesting other tourists have made the same choice as us which is a bit of a comfort.

I’ve decided I should stop reading news articles and watching news bulletins about the damage the typhoon has done in the Philippines as it’s quite worrying. There is an air of excitement and anticipation too though. As with any good storm, I have a desire to watch it unfold. Currently there’s not much to see but things should start to get ingesting in the early hours of the morning, around 4am. Meanwhile, with a powercut likely, we will make the most of the few rubbish on-demand films and eat our pot noodles!

7am: after not a very good night’s sleep for me (Dean says he slept like a log!) we’ve woken to the news that the projected landfall of the typhoon has moved further North meaning its immediate path is now out in the sea. This means we’re no longer right at the centre which is quite the relief. I only hope the people of Hanoi have time to prepare for its landfall which they weren’t originally expecting. Presumably the typhoon’s strength will have reduced significantly by then too.

3:30pm: well it’s rained a lot, which may well have caused flooding in Hoi An’s less well protected structures, and there have been a few strong gusts of wind, but all in all I think it’s safe to say we’ve seen the worst of it. Although it’s apparently still a category 3 typhoon, judging by this satellite image, almost all the worst part is going to be over the sea now. 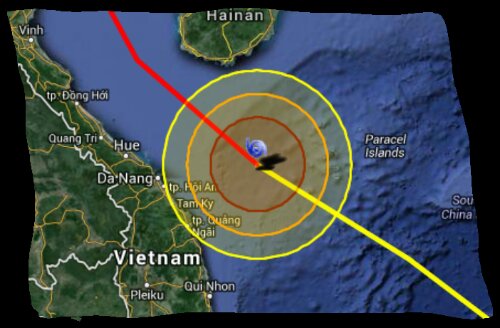 As more and more images and articles go online about the death and destruction that has occurred in the Philippines, it really makes me stop and think. It’s so easy – I know I’ve done it countless times – to sit at home in England, browse the news, and feel slightly moved by, yet far removed from, such disasters when they happen. After all, what, physically, can you do about it?

But last night, despite knowing the typhoon’s intensity had reduced, knowing I was in a safe building, knowing my few belongings were packed and ready to sling on my back if necessary, I’d be lying if I said I didn’t find it pretty scary trying to sleep knowing we were slap bang on the storm’s trajectory. I gained the smallest glimpse of how it must be to live under the constant threat of the next storm. But I can only begin to imagine the terror and panic hundreds of thousands of people must feel, evacuated or not, knowing they could lose their home, their loved ones or their own lives. There comes a point where no amount of preparation, sandbags, ropes and nails can protect you.

I’m not sure where I’m going with these particular wonderings but I guess it’s what travel is all about: gaining a greater, deeper, truer understanding of, and empathy for, our fellow man. It causes me to appreciate what makes our lives different from their lives. And what makes us all the same.

On a much lighter note, here are some pictures of pre-typhoon Hoi An. On the river and at the market: 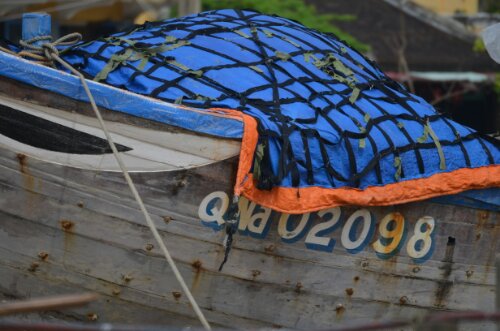 A bonsai at our hotel: 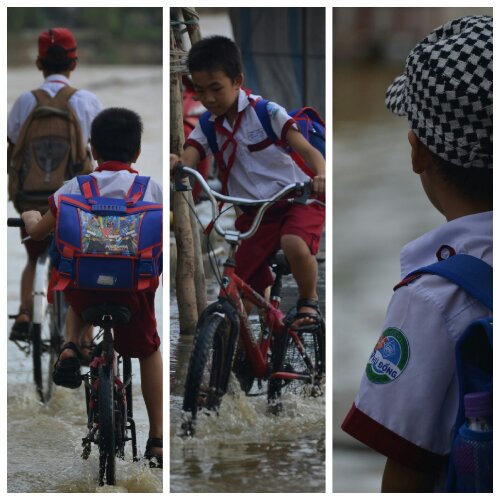 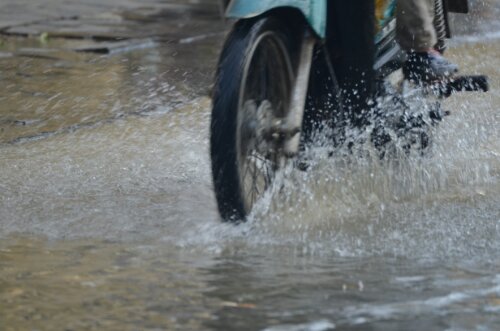 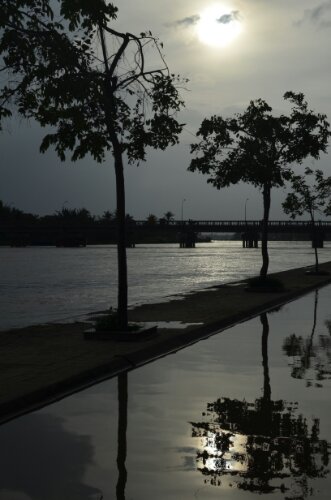 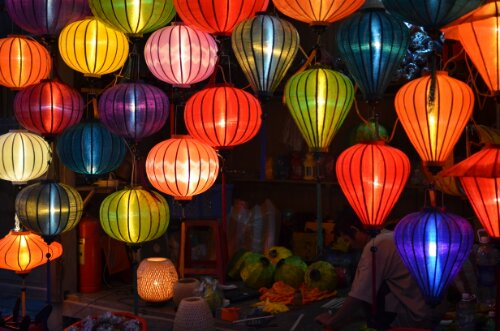 And here are some of the breathtakingly awesome caves – Phong Nha and Paradise Cave – which we saw earlier this week. I can’t do them justice either with words or pictures but here are a few snaps anyway (you may need to turn up your screen brightness! ): 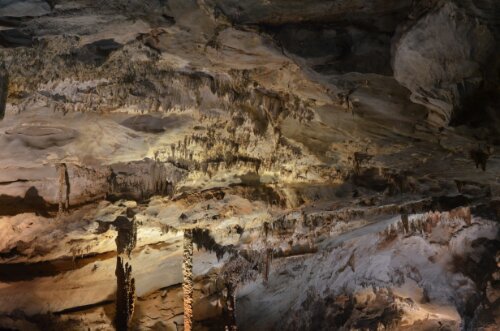 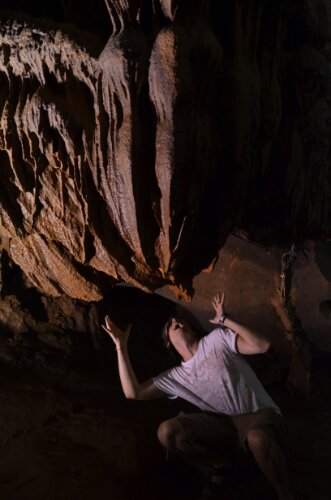 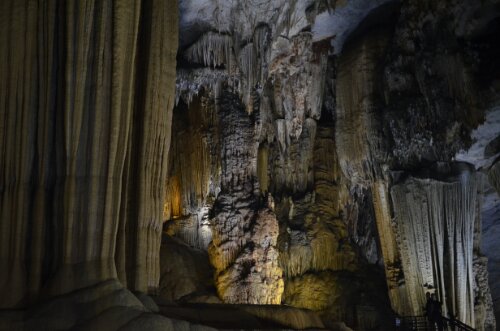