I was very surprised that my driving didn’t make it into dad’s father of the bride speech. I clearly recall only scraping through my cycling proficiency test. At some point after that, dad drove past me riding around near home and said, amongst other things, that I shouldn’t be trusted on the roads due to my inability to cycle in a straight line!

Obviously as an adult I’ve learnt to drive and, in my opinion (which of course necessarily disagrees with my brothers’), am not too bad at it until it comes to reversing and parking but I’m working on them 🙂 My car-killing tendencies did make it into the speech but that’s fortunately not relevant here!

Anyway, my point with all this is that as a reasonably competent and experienced road user in England, barely any of it was of the slightest use during this week’s cycling experiences around Hué! For starters they drive on the right in Vietnam which I am beginning to get used to but not without some considerable brain strain. Two other points to say at the outset: firstly no one (aside from tourists) walks anywhere meaning there are a lot of vehicles in the road; secondly, aside from occasionally at traffic lights, no one stops, they just move a bit left or right meaning the concept of letting someone out does not really exist.

The main thing that worried me when I was learning to drive was the fact that you have to trust everyone else on the road to be awake and alert and observant and communicative. As I think I mentioned in an earlier post, there is nothing to suggest road users here pay attention to anyone else. No one looks behind them before pulling out, no one in any kind of vehicle indicates, many people don’t even look at oncoming traffic when pulling out of a junction. Added to this, I’m sure some people take the approach of a scared-looking white person as an opportunity to perform a sudden u-turn!

There is a definite hierarchy on the road as you’d expect: the bigger and faster the vehicle, the greater priority they take and the less considerate they seem to be. Additionally the loudness and frequency of the horn honking increments with the vehicle’s size, mostly to let others know of their enormous presence. So obviously bicycles are the lowest of the low and often don’t even have a bell! And it’s quite scary hearing a loud, insistent horn behind you but not knowing how large or close its owner is!

The next issue is that there are very few road markings but, judging by the adherence to those they do have, any more would be a waste of paint. They often have a kind of a give way line, accompanied by traffic lights at times, but whether an individual will actually stop is down to personal whim it seems. Then there is sometimes a line down the centre of the road which is completely meaningless. Yes, I suppose you could say that loosely speaking everyone drives on the right, but there is so much overtaking that this often spills over to the other side even in the widest roads. As one of the slowest vehicles on the road, we clung mainly to the pavement but still had to overtake parked cars, rows of three chatting teenage girls riding slowly next to each other, old people and people selling things! Quite scary on such busy, unpredictable roads, but we just had to trust that everyone behind would flow effortlessly round too. Which they always did.

The most terrifying thing for me though was every time (and there were many) that I found someone heading towards me on the same side of the road! No decrease in speed, no indication. I’ve gleaned that people do this when they are turning off on the opposite side of the road to avoid doing a conventional turn when level with their destination. However they are likely to do this for quite some distance, presumably because they know no one will stop to let them in.

Weirdly I don’t think I’ve witnessed any road rage. No accidents or screeching brakes (other than mine!) either. Instead somehow it all just flows. So I guess in some way the road users must be on the ball… just not in a way that fills me with any confidence. Maybe we just have too many rules but I think I like it that way!

Anyway (Mum and Momma!) we survived it all and, despite getting lost, it was actually really fun especially once we cycled out to the countryside where it was much less crazy. I even had chance to practise my Thai numbers to 99 (forgot the word for 100!) in a quieter moment! It chucked it down many times throughout the day but it made it all the more exhilarating to tear down hills in the wind and rain!

As you can probably tell, I didn’t take my camera with me on that excursion but whilst in Hué we’ve also used another wedding present: a Vietnamese course from Adam and Claire. So here’s a bit about that too with a few snaps.

Our first, much shorter trip on bikes, was braving the crazy traffic to get to the market as part of our cooking class. I realise I’ve probably posted more than enough market pictures already so here’s a rainbowy collage and a few others of people: 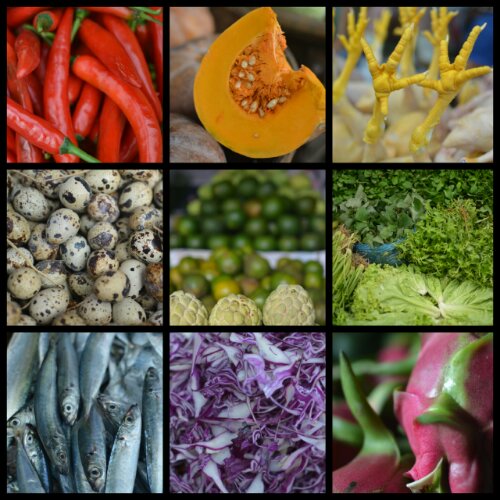 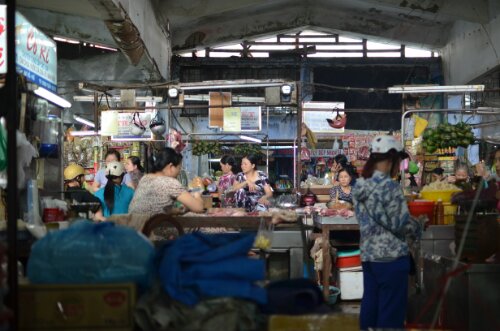 Back at the restaurant we donned aprons and watched the table fill with white bowls of ingredients while we glanced over the recipe sheets we’d been given. The chef looked about 22 and was friendly but fairly serious and very methodical. I was pleased he seemed to try to keep the work area clean but there was more fish/meat/raw egg cross contamination than I would have chosen! 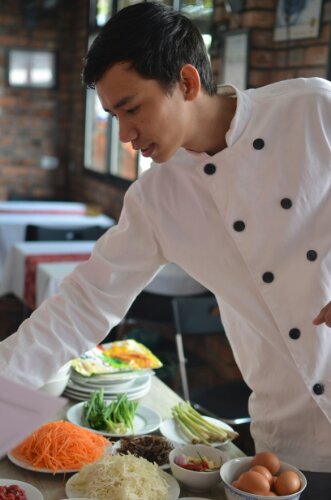 The first thing we made was spring rolls, some fresh and some fried. You mix the contents in a bowl: carrot, spring onion leaves, cabbage, two kinds of mushroom, egg yolks, salt, pepper, sugar, chicken stock granules and vermicelli rice noodles.

Then you dampen a circular piece of rice paper and place a dessert spoon of mixture at one edge. To wrap it, you fold in both sides then roll tightly up to the other end. For the fried version, you then encase it in an extra half a sheet of rice paper. They get blitzed in a pan of oil then drained and served. Before rolling the fresh ones, the mixture is fried with some shallots then, once rolled, it’s ready to eat…which we did, dipping them in soy sauce (me) or fish sauce (everyone else).

Next we prepared the base for the beef noodle soup using pork bones, lemongrass, shallots and seasoning. This disappeared into the kitchen whilst we made our crispy pancakes. 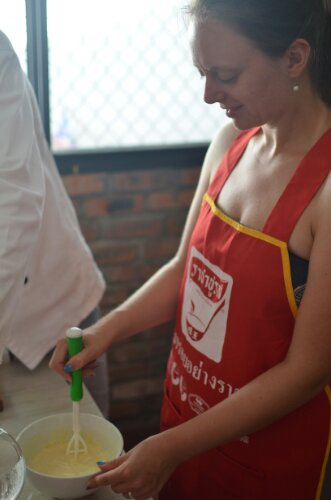 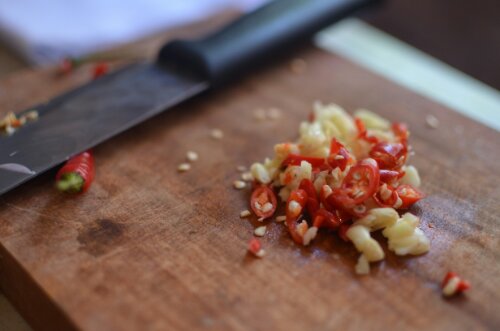 First you make batter by combining special pancake flour with egg yolks and water. Then, quite like pancakes back home, you ladle some into an oiled pan, swish it about a bit then loosen it from the base. Turning off the heat, you add the filling on one half: cooked pork and shrimps, raw carrot, mushrooms and beansprouts. Then, using chopsticks and a metal spatula, you put the heat back on and cook until crispy. This is served with peanut sauce which I didn’t pay any attention to the making of! 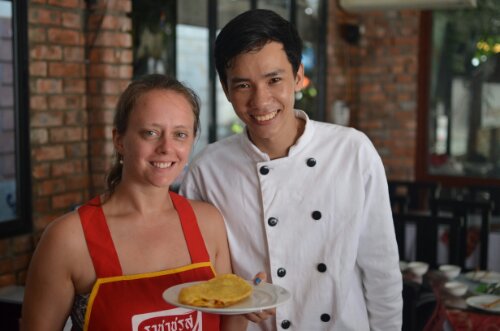 We ate these and afterwards felt rather full. But there was more to come. The soup reappeared and had had some chilli flakes added to it. The chef served some fresh noodles into bowls. To the soup, he added whole spring onions then brought it back up to a simmer. Next he dipped a ladle of pieces of raw beef just under the surface of the soup for a few seconds. He tipped the resulting juices into one noodle bowl then dipped it for a few seconds more before putting the whole lot into the bowl. To finish off, he spooned in some more of the soup and topped with a couple of spring onions. At the table, you add a squeeze of lime and some greenery. It was pretty tasty I thought, although we were quite full!

Today (Friday) we’ve spent 12 hours getting from Hue on the East coast of Vietnam to Savanakhet in the West of Laos. It was a horrible journey where we were cheated and mistreated but I’m too cross to explain what happened (probably wouldn’t make very interesting reading either!)! We’re now close to the Thai border so tomorrow we will get a bus over tomorrow, then another bus to the place where our host teacher will collect us. I’m really looking forward to it, especially staying with a family and getting to know them properly instead of being ‘on the road’, having the same backpacker conversation many times a day! Teaching 40 teenagers may be a bit scary but probably much scarier for Dean!

Not sure what the Internet situation will be there but I hope to continue my updates!