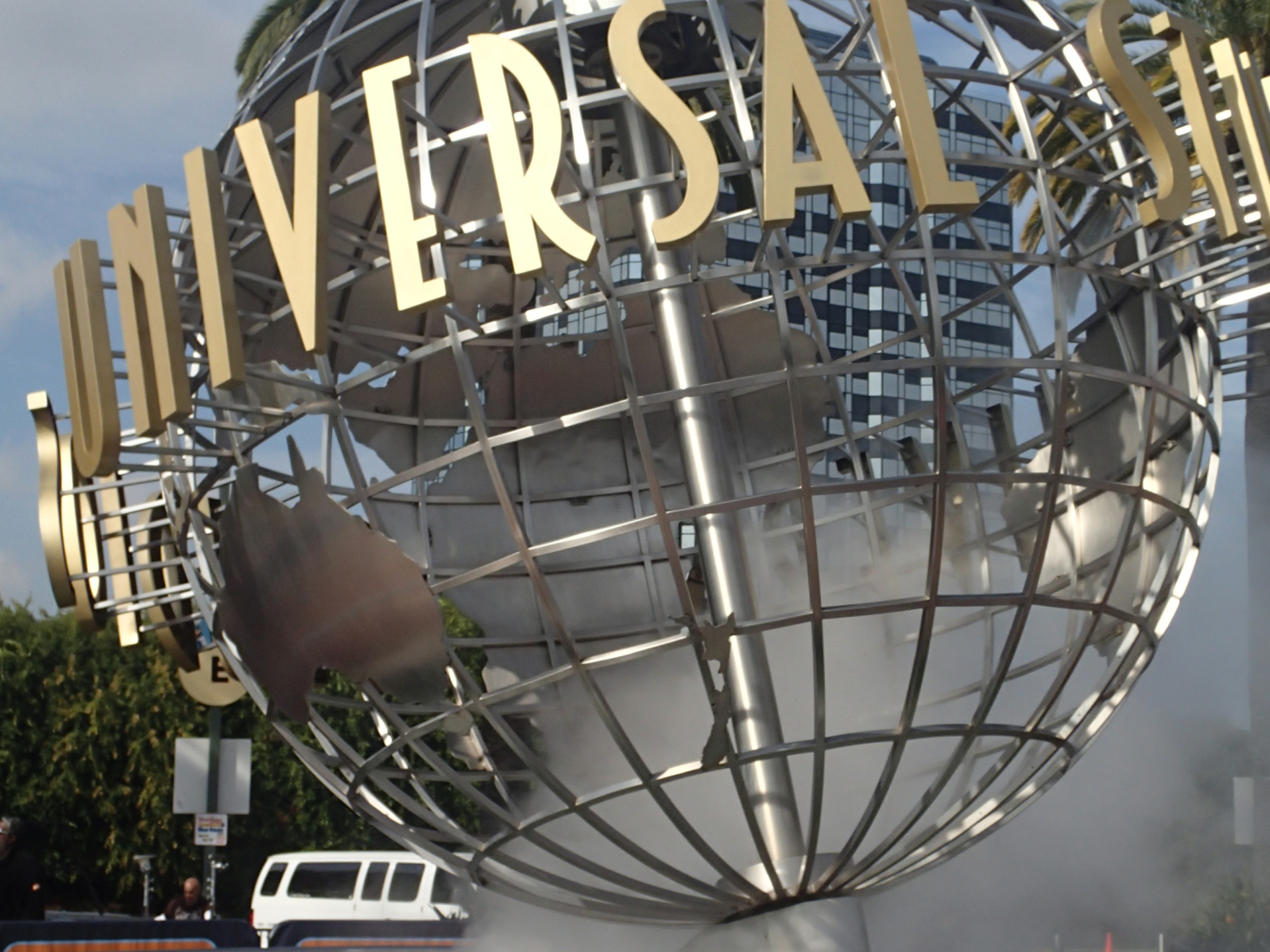 For anyone anticipating photographs of celebrities, the HOLLYWOOD sign, the beach, or the stars of Hollywood Boulevard, I’m afraid you are going to be disappointed! Dean and I have both visited LA before and so decided not to repeat these attractions. We were also staying exceedingly far away from, well, pretty much everything so spending the majority of our time in buses and trains meant we needed to be selective about our destinations.

Entering the US was actually quite the task. The night before, I discovered that you have to submit an ESTA application 72 hours before you travel to get clearance to enter. This wasn’t the case when we last visited and our round the world travel company hadn’t bothered to mention it. Luckily, 72 hours was a massive exaggeration and it came through within about 10 minutes. Then, at check in, our airline informed us that our flights to Mexico didn’t count as proof of our onward travel! So, upon their advice, we had to frantically book some dummy flights (Florida to Honduras I think) and fortunately we located some fully refundable ones. Quite the farce but it all turned out ok in the end!

I’d forgotten how friendly some Americans are,  especially in contrast to the reserved Japanese. It was so refreshing to have people just strike up a conversation with us, offer us transport advice and (whether or not they meant it) wish us a ‘great day’. It was also nice to have everything said and written in English for the first time in 5 months. Helpfully, in LA, most things are also written in Spanish which was good practice for us!

Here’s what we got up to when we weren’t sitting on buses. We didn’t want to carry too many valuables around so I’m afraid photos are lacking until the last day!

Space and Two and a Half Men
The California Science Center was free and really good except for the thousands of obnoxious and unruly American school kids everywhere (made me proud of the kids I teach!). We spent most of our time in the Space exhibit including seeing inside a Mercury capsule (a tiny space for two people) and the smaller one which took Ham the chimp into space. We also learnt lots about life in space and watched a 3D film about the construction of and life on the International Space Station which was very interesting.

The highlight was definitely seeing the huge Endeavour Space Shuttle up close in a massive exhibition room.

After that we traveled for about 90 minutes to the Warner Brothers’ Studios where we spent a long time queuing up to get into a free filming of Two and a Half Men. Watching Ashton Kutcher and the rest of the cast was as close as we got to seeing any celebrities. There was a lot of waiting around and listening to the ‘warm up guy’ before we started and then between each cut. I’m glad we weren’t sitting closer to him as he kept picking people out to do embarrassing things like dance or make animal noses or a fake blind date show! He was continually reminding us to ‘laugh out loud’ but ‘naturally’ and ‘as if the action was taking place centre stage’ which it usually wasn’t. There were about 5 sets across the stretch of the stage then we also had to watch and laugh at about 6 or 7 pre-recorded sections. It was really interesting watching the filming take place with a phenomenal number of crew involved and seeing the actors live. At half time we all got free pizza too!

A trip to the movies
We had a lazy day due to having pretty bad jet lag for much of our stay; sleepless nights and falling asleep on buses and in museums which we didn’t do a very good job of overcoming! So we went to a local diner for lunch and then to a movie theatre to watch the limited edition, only in America, extra long version of Anchor Man 2. It was brilliant! Thanks to Melissa, Richard, Rebecca and Joshua Thornhill for the wedding present!

Universal Studios (the best day of all!)
This real American day out at Universal Studios was a huge treat thanks to Harry and Ting. Three buses got us there for about 9am so we had time for bagels and cream cheese at The Coffee Bean, photos in front of the Universal sign and to buy our tickets before the gates were open at about 9:50. Although we were allowed in, we were prevented from entering the park, by a man in a police costume wielding a truncheon, until the 10 o’clock call of ‘action!’ 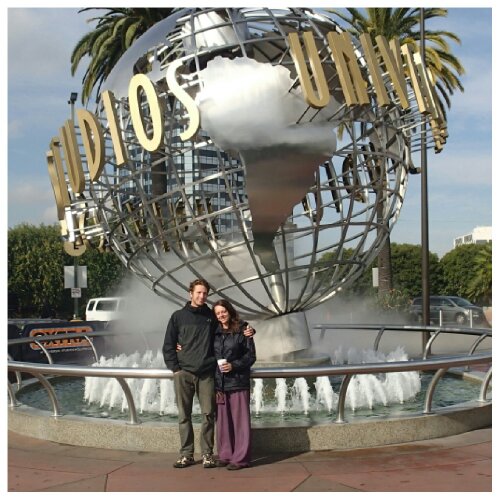 We ended up at the front of the waiting crowd so that, when the time came, we walked first into the completely empty theme park – a pretty unique experience! We hot-footed it down several escalators to the lower lot where Dean had the highlight of his day: he met a giant moving, talking Optimus Prime! Originally he was excited because he thought it was a robot but he said it was still good despite his realisation that it was a man on stilts! After that we walked straight into the queue-less Transformers 3D attraction. Just walking around the many railed rooms where you would normally wait, took a good five minutes so it was great that we could go straight up to the ride. Unfortunately there was a bit of a hitch when we arrived: the ride wasn’t working. So we were given Jelly Beans to appease us, we took a few photos in our 3D glasses and soon enough the ride car pulled up and we climbed in.

The ride was amazing! You basically sit in the car as it tips, shakes, races and jolts around a track which deposits you in front of several massive 4K-3D screens. The premise (for those unacquainted with Transformers like me) is that you are helping the Autobots to defeat the Decepticons through a load of high speed chases, collisions and fights. Words can’t do it justice but the technology was astounding! On the way out we received a voucher for a ‘front of the line’ pass or a drink to further pacify us about the technical hitch which was nice of them. We ended up opting for the drink as there were hardly any queues all day – I think our longest wait was about 20 minutes!

Next we strolled to the front of the Jurassic Park line. The ride first involves a boat ride (we had the front row) past lots of moving dinosaurs and jungly-ness. Towards the end there’s a small incline and a tiny descent then, inexplicably out of nowhere, an 84ft logflume drop! We got very wet but, as it was the first time we’d seen the sun in LA, we soon dried off. 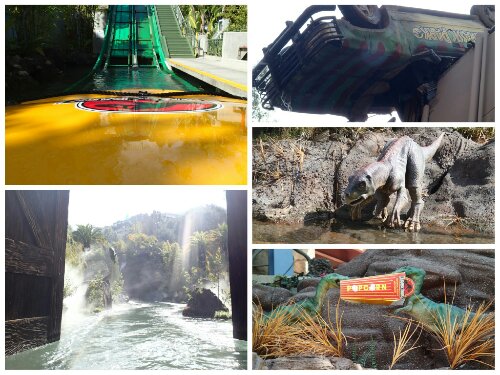 The Mummy The Ride was up next which, again there was no queue for. This was kind of bad since I was still feeling a bit sick from the first two rides (combined with Jelly Beans) and had no time to prepare mentally for what was about to come! It was an indoor forwards and backwards rollercoaster in the dark with various neon ghostly faces up above which went up to 45mph! For some reason, perhaps adrenaline, we got back on for a second go immediately afterwards! In order to recover, we visited the museum after that which contains lots of film memorabilia including the Back to the Future car which I took a photo of for John Greenbank 🙂 . 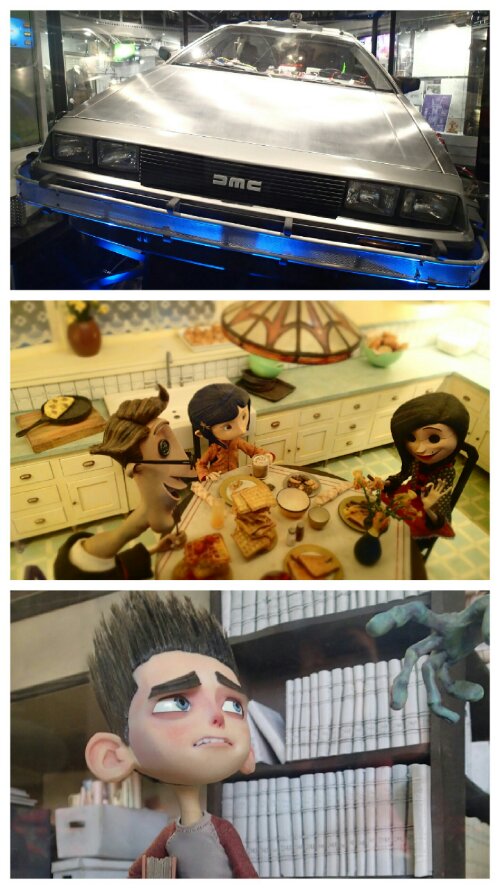 Back up the escalators we joined the line for The Simpsons ride. Set in Krustyland, this is a simulator ride through Springfield where Sideshow Bob is trying to kill the Simpsons and Maggie turns into radioactive giant and saves the day. 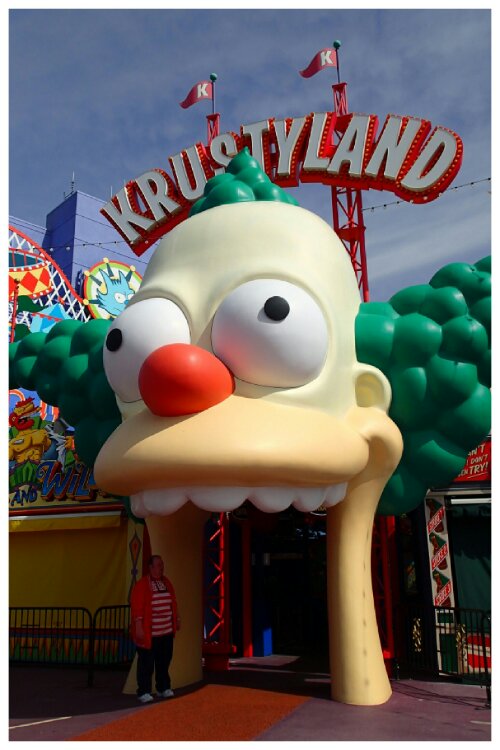 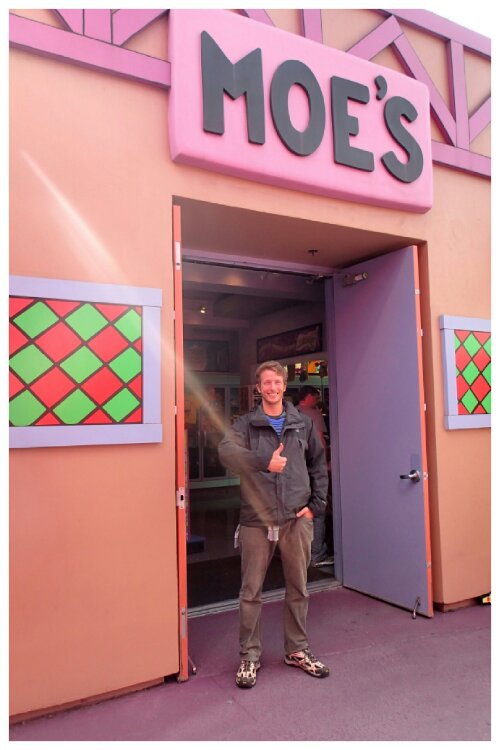 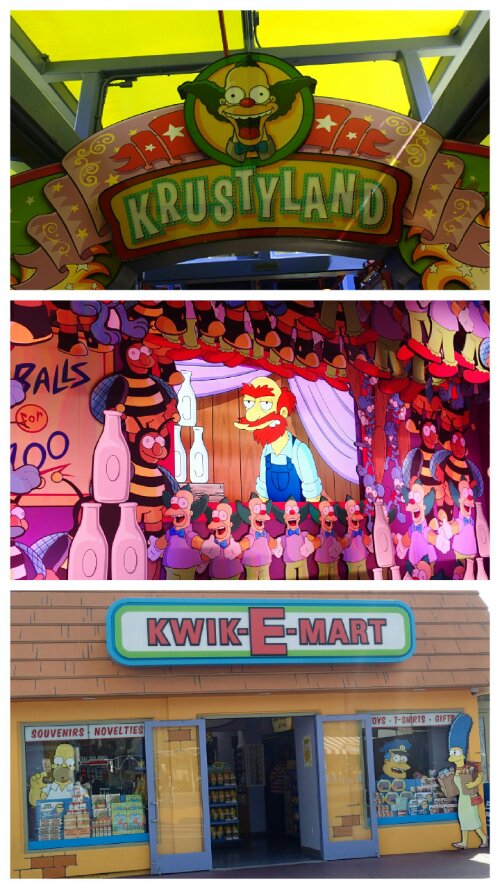 After that it was time to embark upon the famous Studio Tour around the back lot which lasted about an hour. You go around in a tram, guided by a man on a TV screen which also shows film clips. Highlights were: the world’s biggest 360° 3D experience where we were in the midst of King Kong endeavouring to save us from dinosaurs; a man appearing to remove a dead woman from Bates’ Motel (from Psycho); Whoville scenery from The Grinch; the plane crash from War of the Worlds; various famous movie cars; a simulated flash flood; loads of façades used in various films; a drive down Wisteria Lane; a moving scene from Earthquake where a tanker falls on the tram, a fire starts, a train collides into the tanker and then the whole place floods! All very interesting. 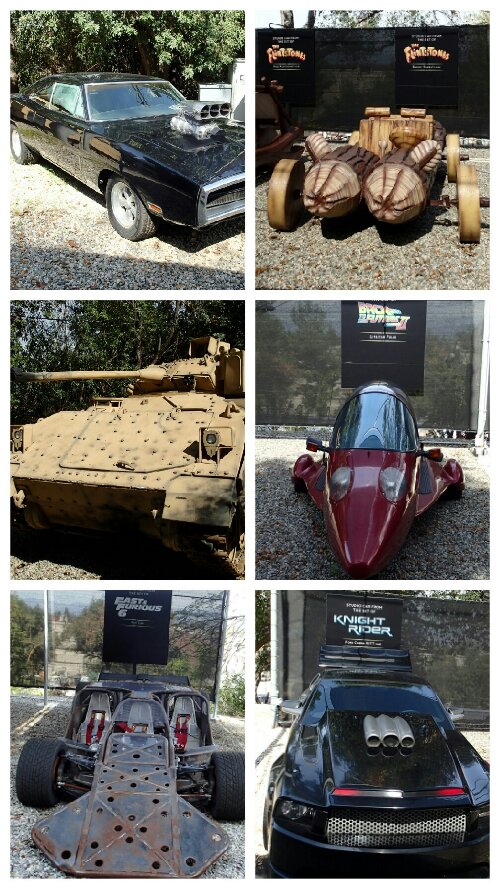 The House of Horrors was way scarier than it should have been. It’s a twisty walk through darkened corridors with a range of gruesome and eerie scenes but then there are loads of live performers who leap out at you around every bend, often brandishing weapons! I spent most of it screaming every time one made me jump, Dean spent most of it laughing at me!

Last was Shrek 3D which began in a dungeon where Pinocchio and the Three Little Pigs had been tied up. The story of Lord Farquaad kidnapping Princess Fiona leading Shrek, Donkey and Dragon to embark on a misson to save her followed.

All throughout the day, there were characters wandering around who you could have your photo taken with and props to pose with. Here are a few: 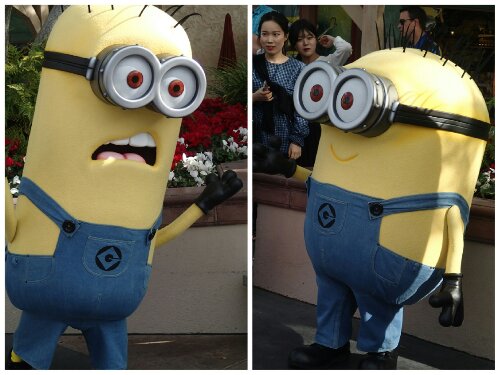 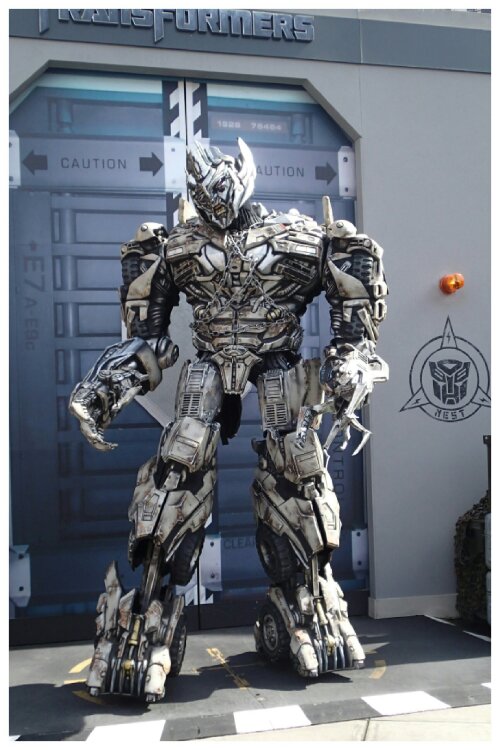 Now we’re in Mexico, back to the sunshine at last and very much in at the deep end with our Spanish!  More on that next time! I’ll leave you with some tasty American treats.

One thought on “USA: Optimus Prime, Ashton Kutcher and a space shuttle in LA”