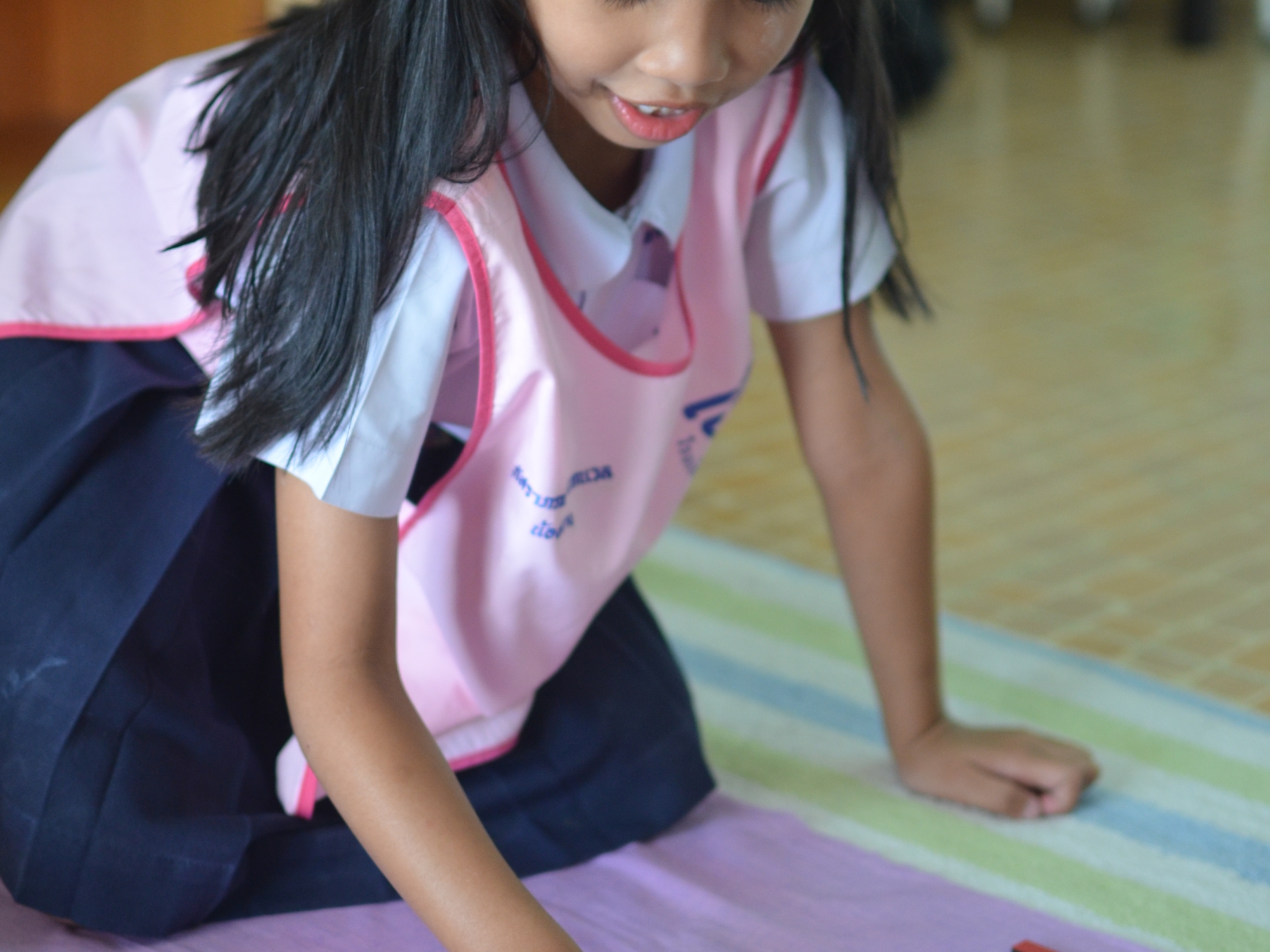 Well, although we’ve spent a lot of time doing nothing this week due to countless cancelled lessons, I still have quite a number of new experiences to jam into this post. I think the best approach is a chronological one.

Sunday
Tae, Joon, Atong, Dean and I embarked on a little outing. First we visited a temple about 35km away which is something of a Buddhist pilgrimage site in the area. Its remarkable because every wall of each building in the complex is covered in bottles, many of the Red Bull! There are even intricate mosaics of bottle lids. Pretty impressive I thought, and it’s still under construction: they’re currently making a giant reclining Buddha and a room to house him. 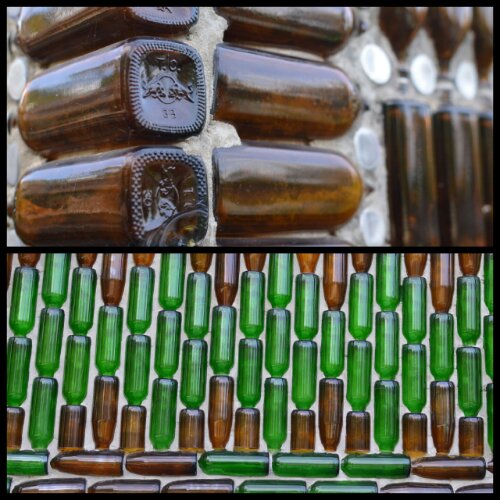 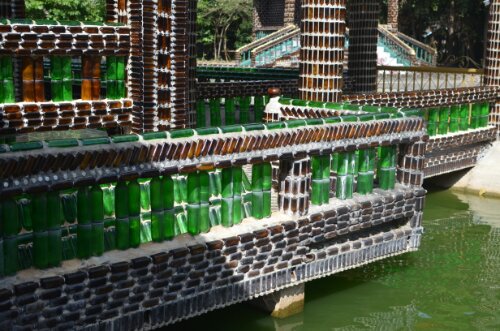 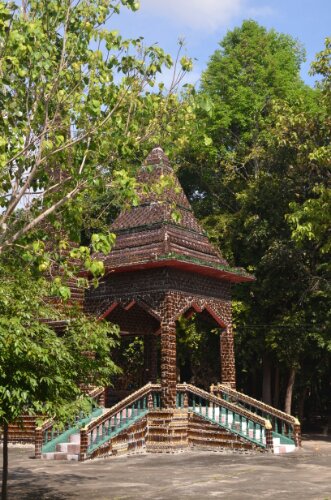 After this we drove a good 90 minutes to the nearest city, Sisaket, for lunch! It was a sushi and hot pot restaurant in a giant Tesco Lotus. The hot pot aspect is a similar process to the Laos fondue except that there’s no meat cooking part in the middle, just the soup bit. Tasty! Or as the Thai’s say, “Arroy!”

Monday
Morning lessons at Sritrakoolwittaya School were cancelled to make way for clearing up the grounds in preparation for a committee checking the school’s drugs awareness programme (hence last week’s drug tests).

In the afternoon, we were going to teach two classes of 17 year olds but we were instead directed to watch the presentation to the committee, teachers, some members of the community and a monk. This consisted of some very good traditional music and dancing performed by the pupils, and various speeches delivered by students and members of the committee. Obviously we didn’t really understand anything that was going on except for one speech which was in English, and the bit where Tae got up and invited us to introduce ourselves! 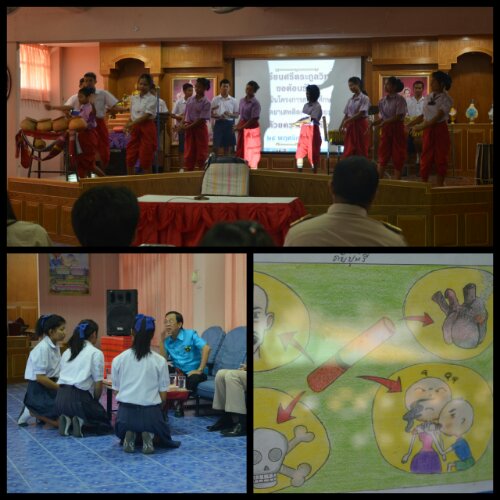 Apparently these government-run committees for this or that arrive about 5 times a year, causing lots of disruption to classes every time. The kids (and quite possibly many teachers) probably enjoy it but they interfere no end with lessons. It does seem, at least in my observations of the last two weeks, that a disproportionate amount of effort is put into pleasing the committees. That said, it does give rise to a much more relaxed, stress-free atmosphere! There are no government issued tests; teachers write their own, based on what they have taught and assess these against a set of standards. As far as I know there is no moderation or standardisation. Having only taught in Britain’s SAT orientated system, I’m very conflicted as to what I think about all this!

Here are a few pictures from around school including the school bus and a lunchtime concert! 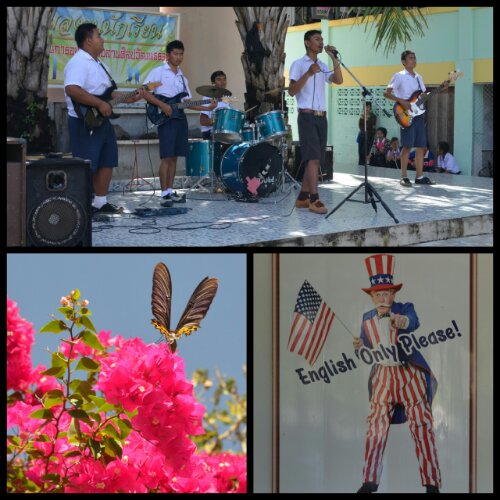 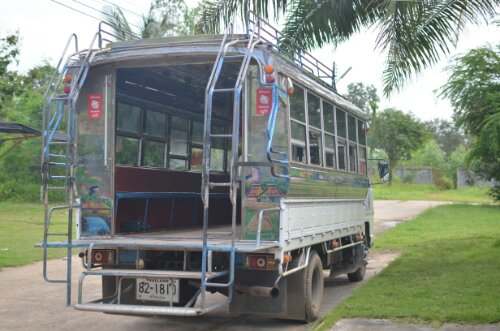 Tuesday
More cancelled lessons but this time to give the students time to prepare for their sports days (the rest of the week). So the day was fairly uneventful but after school was interesting.

We did our first (of 3 this week) English lesson for the teachers which was really fun. There’s a big range of ability but we focused on conversations with the aim of building their confidence in talking to native speakers when they meet them. For the rest of the week we’ve tried to get them to practise bits with us instead of always greeting them in Thai! 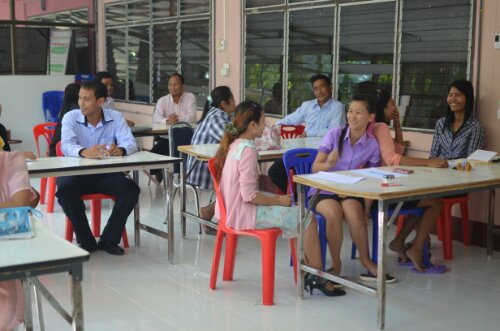 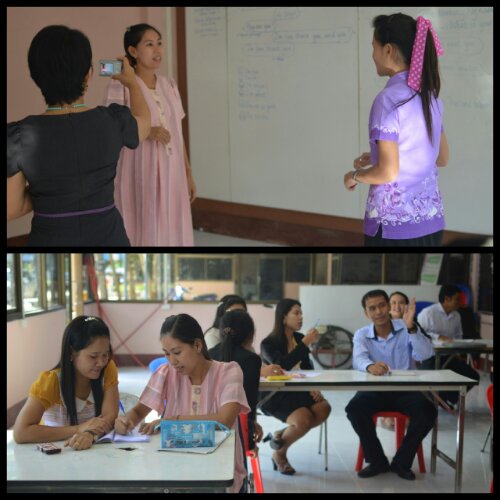 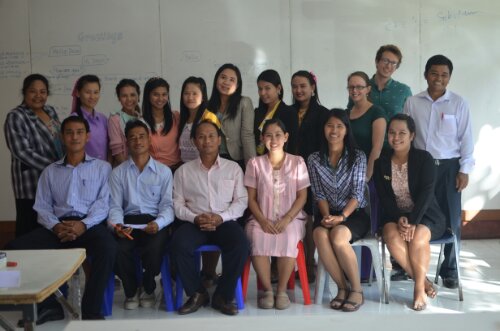 After that we went on a bit of an adventure. Each semester (there are 2 per year) the teachers have to drive out to several villages to visit each child in their tutor group. We joined Tae as she visited 7 students that live in the same village as each other. Due to the district’s proximity to the border, many parents speak Laos or Cambodian and no Thai. I have a lot of admiration for Tae’s multilingualism (which also stretched to Korean, Japanese and Spanish)!

During the visit, the teacher asks the parents if the child helps out at home and whether there is anything the parents would like the school to help with. In addition, when necessary, they will ask why the pupil is always absent, late or skives lessons. Then they take a photograph of the child (if present), their responsible adult and their teacher (plus me this time!). Apparently this is required as proof that the child is not living alone.

Each visit is only a few minutes long but it is unscheduled and so serves as a good opportunity to check the kid is being cared for adequately. There is no social services type organisation in Thailand to help if a child was being neglected, which makes the role of the school and these sorts of visits all the more important. I don’t think the school has powers to take action but at least they arevinformed of the pupils’ circumstances and can offer support. I can’t imagine our society without social services, regardless of the flack they sometimes receive.

The village we visited was typical of the area: lots of mismatched houses set into individual plots of land, most with a cow or two, a dog and some chickens. As soon as we got out of the car, we heard the usual cries of “farang!” (Dean informs me it means ‘foreigner’, not ‘white person’ as I wrote previously) from groups of villagers sitting in front of their houses and clusters of giggling little kids. One little gang excitedly followed us from house to house, always at a ‘safe’ distance! We generally just smile and wai lots and the locals seem to appreciate it and return the gestures. You’ll understand what an uncommon spectacle we must have been when I say that, in the first house we visited, a child of about 3 or 4 wailed with terror, burst into tears and ran away when he saw us! He returned a few minutes later with a gun…thankfully it was plastic, and I doubt he knew the significance of his choice of toy!

At the next house there was a 7 day old baby whose mother looked to be about 15. It turned out she was 25 and proved, not for the first time, that I am hopeless at judging the ages of Thai people! All the kids at school look so young, partly because, even at 19, they’re not very tall and partly because they are still so innocent in their clothing, lack of make up and general attitudes.

Further on, we saw babies being rocked in hammocks, a 13 year old pupil herding his family’s water buffalo into their pen (that same boy sleeps every night in their watermelon field with his father to prevent anyone stealing their crops!), a woman weaving on a loom, new born puppies and older women with red teeth and lips from chewing betel nut.

Initially I assumed that these home visits were instead of parent-teacher meetings at school but actually these happen too, twice a year, on a Saturday! Even in schools like Sritrakoolwittaya which serve all the villages in a district, Tae says at least 90% of parents turn up. There are such low levels of adult literacy in these rural schools that some parents have to ‘sign’ to say they have attended with a finger print.

Wednesday
Finally, Atong was able to take his farang to show at school! He is in a class of at least 34 kindergarten kids (5 and 6 years old) which was obviously a very different experience to the high school! Our purpose of being there was obviously lost in translation as we unexpectedly ended up ‘teaching’ the little monkeys for an hour and a half! It’s a Montessori school so they learn a lot of English compared to the other schools we’ve been to. It appears much more affluent than the others although Tae says all schools receive the same government funding. It may be something to do with the fact that it is in a town and therefore there are higher levels of parent literacy and involvement.

We started off by teaching their (not quite correct) version of phonics then moved onto fruit flash cards (most of which I’d never heard of), then opted to split the year groups between us. I read them a few stories in English then we joined back up to do some body parts games then something with colours and numbers (all made up on the spot but I think we pulled it off)!

After that they crocodiled themselves to the swimming pool. It was outdoors and invoked a huge amount of jealousy in Dean and I as it was one of the hottest days we’ve had so far! 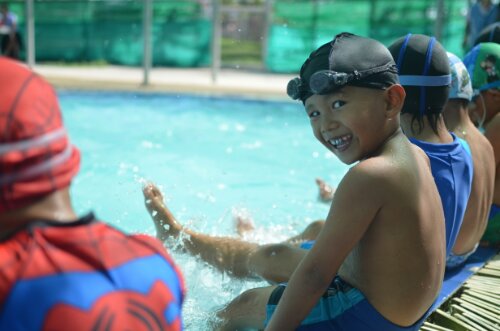 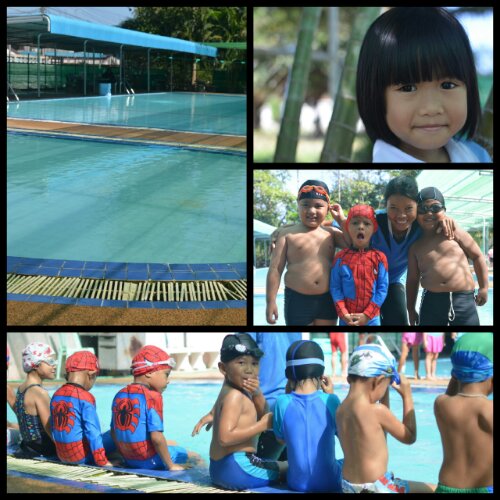 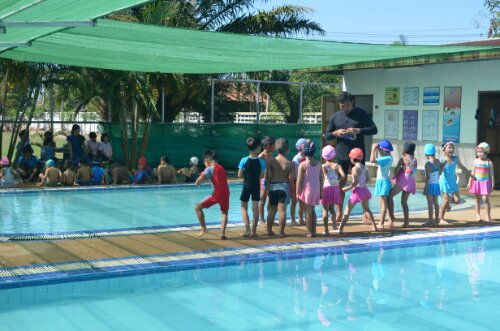 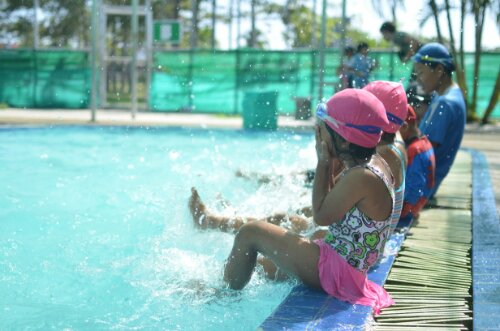 On our return to the classroom, dinner was ready which was served on the veranda. The kids were very organised, well behaved and fully informed of the system. When finished, they take their plates out to the back to scrape and rinse them. Then they can play. 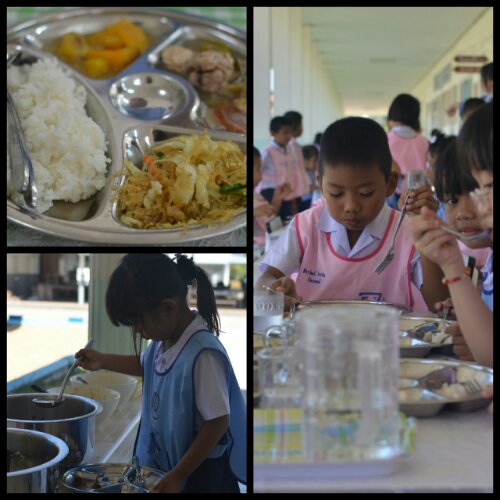 When we walked into the classroom and saw all the tidy toys and teaching aids in immaculate condition, I assumed they were never played with. But they are! The kids carefully get out what they want, plus a mat to put it on, they play carefully and tidily, then they return it to its home and choose the next thing. Some picked plasticine (I made Atong some dinosaurs!), colouring or bricks. Others chose to construct English words with wooden letters or practise counting in English using Western digits. One boy disassembled his tower piece by piece rather than knocking it down! Some helped with the washing up while the world’s youngest dinner lady mopped the floor! 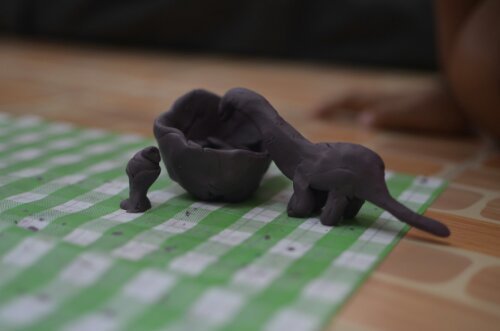 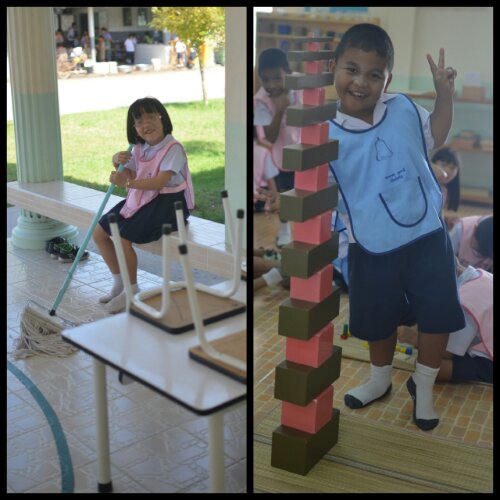 Just before teeth brushing and nap time (basically the whole afternoon), we said goodbye and were thanked with a bunch of bananas! 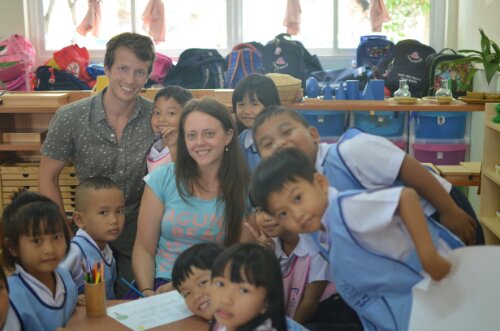 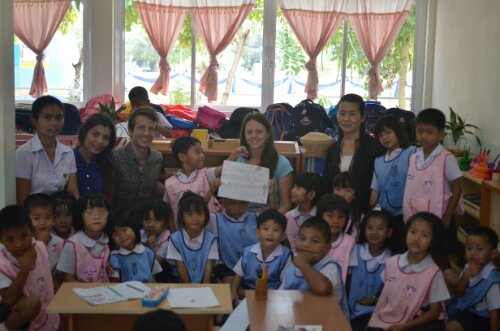 Thursday
As I mentioned last week, we’re spending Thursdays and Fridays at a primary school which is actually 5 – 15 years old I think so there are some high school levels in there.

It’s nice for a bit of variety but the level of English, even in the older kids (and the teachers!), is much lower than the high school so many of our ideas for older pupils are too difficult yet our silly games we use with the little kids are too immature (or dangerous!) for them! Tricky, especially with no props or resources beyond a football, a packet of tiny coloured pencils and some black and white picture flashcards we’ve made! I’m enjoying the opportunity to teach the younger children though, more my comfort zone! 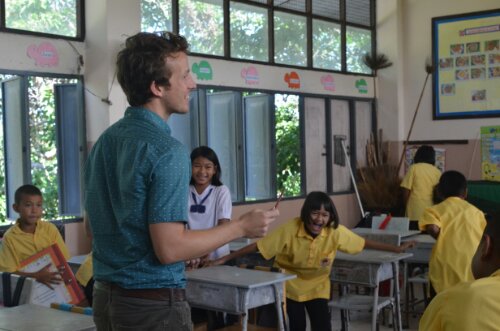 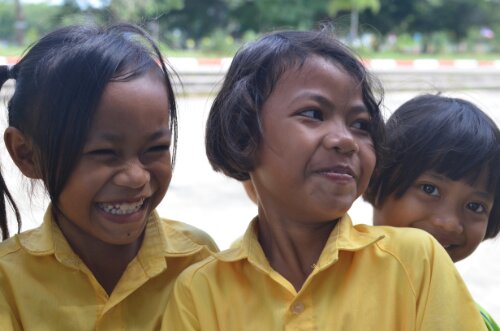 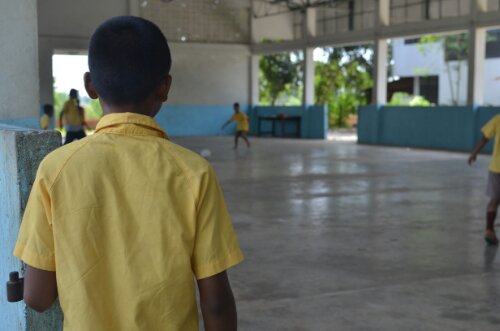 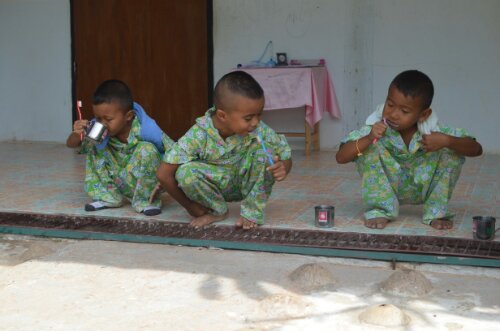 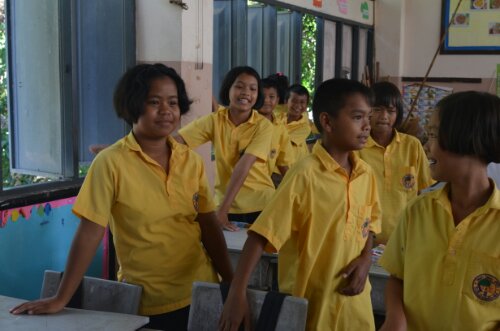 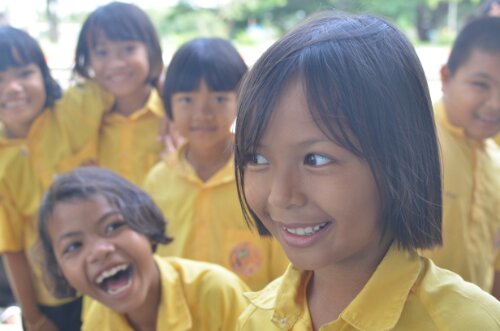 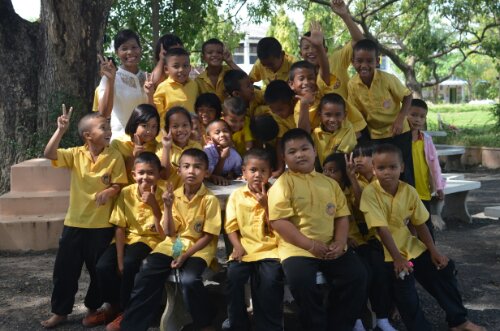 A nutritious lunch of some kind of insect (not mine!), kite flying and amazing creations made from plastic bottles using soldering irons and paint! 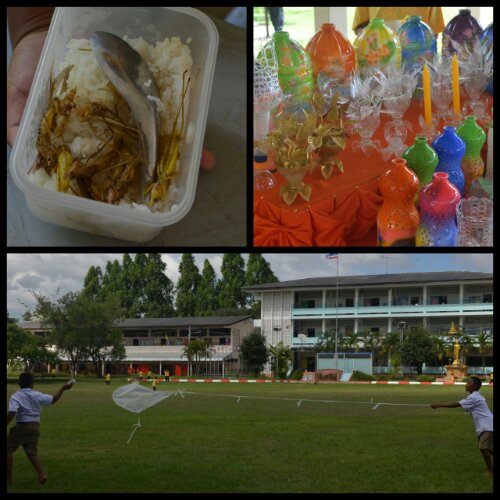 Friday
We’re starting to feel much more a part of the high school: both kids and teachers have relaxed around us and are trying more English out when we pass. As I said, it’s been sports week. There are 4 teams who each decorate their seating area, organise their food, participate in the parade, play drums, cheer (which sounds more like blood-curdling screams to our ears!) and enter a football team, a volleyball team, etc. 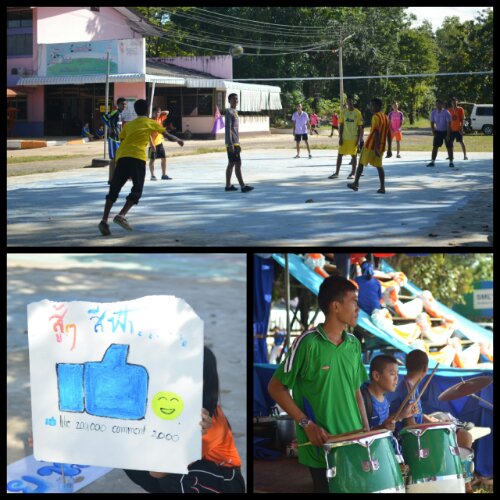 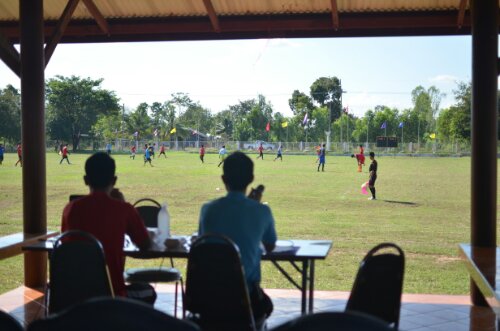 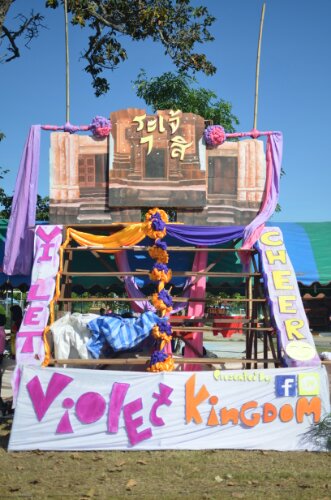 On Friday morning, all the pupils in their team t-shirts gather down the road from the school. We didn’t see it because we were at the primary school but they then parade into school with drums, brass instruments, very costumed baton-twirling girls, dancing and much excitement. At the end of the day, prizes are awarded for sporting and supporting achievements.

This weekend we are going to an elephant village on Saturday then Tae and Joon have to attend a school meeting all day on Sunday (!) so we’ll have to find ourselves some entertainment.

We’re currently keeping an eye on the news regarding the political unrest in Bangkok as we’ve got a flight from there to Burma next weekend.

Things I’m craving most: marmite, hot showers and pizza!
Number of mosquito bites: too many to count!
Number of geckos living in our room: at least one which fell on Dean yesterday evening, giving them both quite a fright!