I’ve lost several things during this trip: a padlock, a travel plug adaptor, a pair of leggings, probably other things too. But yesterday I topped them all by leaving my camera in a cupcake shop!

Thankfully we’d taken the shop’s business card so we had its name and number and fortunately it was found and kept safe by very honest employees. So it all ended OK except Dean wasn’t impressed that we had to get a bus all the way across town in torrential rain first thing this morning to reclaim it!

We’re back in Argentina for the second time of the trip, Buenos Aires to be precise, but this is my first post about it because, to be perfectly honest, we haven’t seen or done much of note. There are a few reasons for this: everything is very expensive; football matches have meant lots of things have been closed; and the country has a very European feel meaning it’s not noticeably ‘different’ much of the time meaning there’s not much to write about or photograph.

Nevertheless we have visited six destinations so I thought I’d do a speedy summary of their highlights.

In the far north of the country, we had to cut our stay short here due to time restrictions, so we just spent one evening and a day walking around the town. By chance, on arrival, we stumbled upon a mass gathering in the street celebrating the anniversary of the death of Martín Miguel de Güemes, a popular military leader from the early 19th century. There was a band and singer performing on a huge stage and thousands of teenagers milling about amiably eating steak sandwiches, chips, chorizo hotdogs and candyfloss.

They did an excellent clean up job as the next morning there was no sign of the evening’s event. We spent the day exploring the town a little which was uneventful with one exception: an unexpectedly amazing museum about the children of Llullaillaco (a mountain) who were Inca sacrifices, buried over 500 years ago and almost perfectly preserved by the frozen ground they were laid in 22,100ft above sea level. Photos weren’t allowed and so I’m going from memory here with my facts.

There was The Maiden (a young teenager), and two children Llullaillaco Boy and Lightning Girl (because she was struck by lightning sometime since her death) who were symbolically married to one another to unify two tribes. I think they were buried alive but drugged so that, presumably, they weren’t conscious. The museum displayed the various items they were discovered with, thought to be needed in their afterlife. At any one time you can only see one of the mummies. It’s horrible to think of the reality of the sacrifices but at the same time fascinating to see their skin, hair and clothing all perfectly preserved as though they are only asleep. This article has the best photographs.

A very Spanish city in the centre of Argentina, Córdoba is home to the oldest university in the country which was formed by the Jesuit Order in 1613. We took a very interesting and informative tour around some of the university buildings and into this church.

I wish I could remember more concrete facts; starting the tour within an hour of stepping off a night bus probably didn’t help!

Here in the wine-producing region of the country, we stayed in a wine cellar which was a first! It was very chilly but we also had use of a sitting room with a fire which was very much enjoyed. The typical activity of the area is of course wine-tasting but the football match on Saturday and the next day being a Sunday prevented us doing this. We watched the football in a bar with a mountain of chips – a common snack, usually topped with something tasty, in this case spring onions and bacon!

Here are some photos of the post-game celebrations. 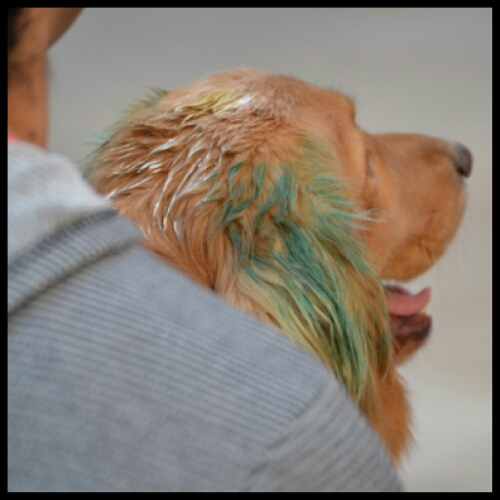 This mother was teaching her toddler to cheer!

After our second visit to Chile, we returned to Argentina through my favourite border crossing so far. It was a winter wonderland with thick snow and forests of monkey puzzle trees. The bus driver also gave us warming sweet coffee and dinosaur biscuits after we’d dealt with border requirements!

We didn’t stay overnight in San Martin, but we had a few hours to explore. Like its Chilean counterpart, Pucon (where we snowboarded), it had a very alpine feel to its buildings and there were hawks everywhere. 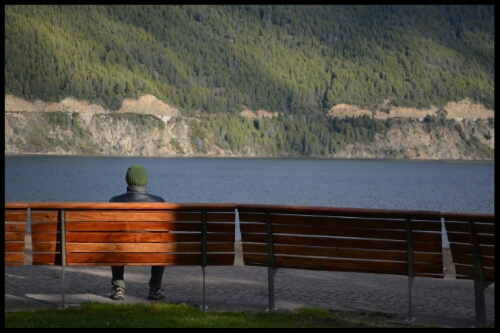 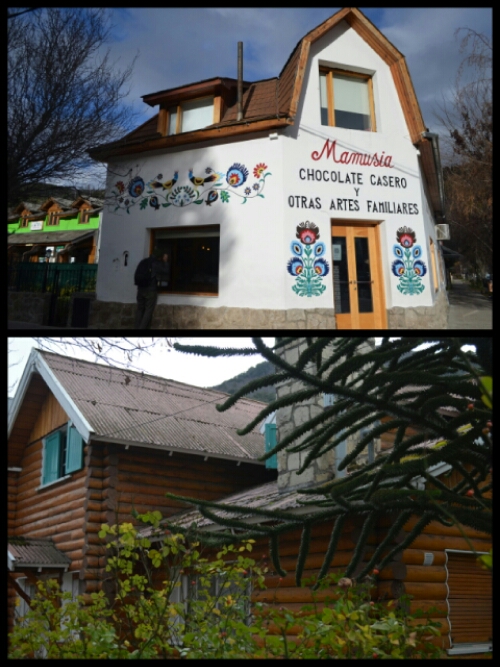 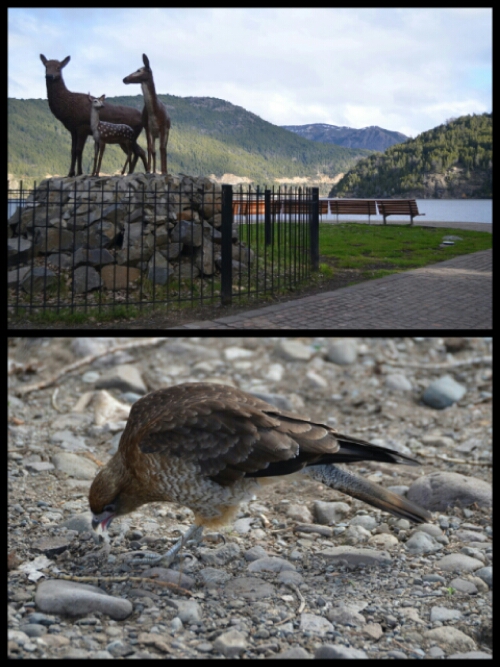 We warmed up with a hot chocolate in one of the numerous chocolatier shops.

Unfortunately this destination, reached through the lake district, was a wash out. I think the mountains and lakes would be lovely in good weather but not in rain and cloud so we, predictably, watched football and crime drama series!

Another night bus of 24 hours delivered us to the capital where we had a day and a half of sightseeing. The city has lots of grand buildings and impressive art nouveau and art deco facades if you remember to walk along looking up. There’s also plenty of graffiti and muralism. 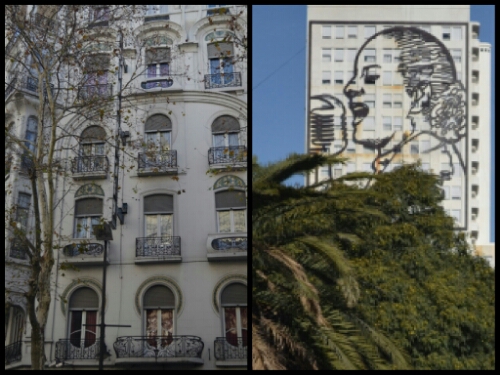 As it was Thursday, we witnessed the marching Mothers of the Plaza de Mayo. They began marching in protest against the disappearance of 30,000 sons and daughters during the Dirty War of the military dictatorship from 1976 to 1983. I don’t know much about it but Wikipedia does.

Later we queued up to visit the city’s oldest cafe which has retained its character and style. I enjoyed letting my imagination wander back in time for a little while. We treated ourselves to churros and hot chocolate/coffee with our wedding present from the Hawley family. Tasty! 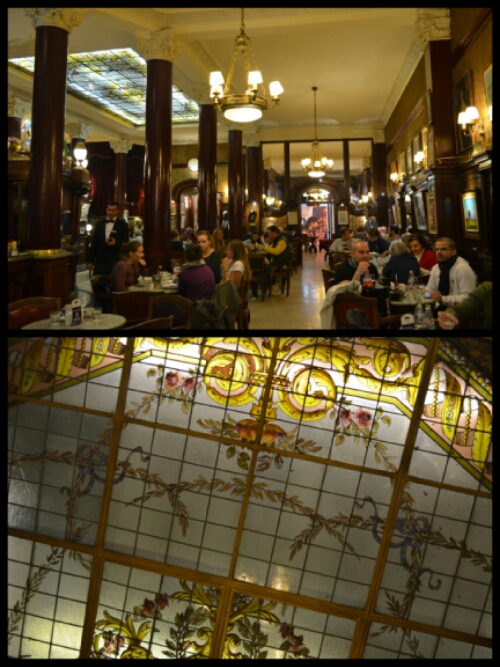 The barrio of La Boca, one of the few places I remember from my visit to BA about seven years ago, is a true tourist trap with souvenir shops, over-priced restaurants and tango dancers posing for photographs. It’s got the same brightly painted corrugated metal house cladding as Valparaiso but mainly concentrated into these few touristy streets. I’m sure they’re not to everyone’s taste but I found a lot of the balconies and painted signs aesthetically pleasing. Not so sure about the strange giant caricatures looming over the streets though! 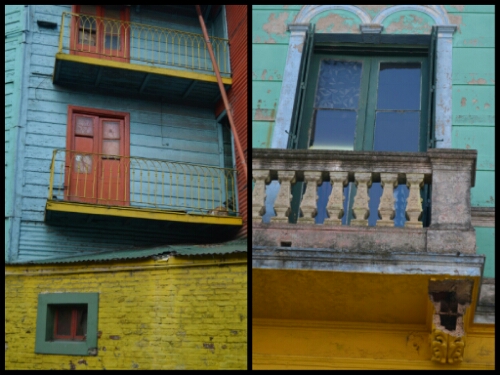 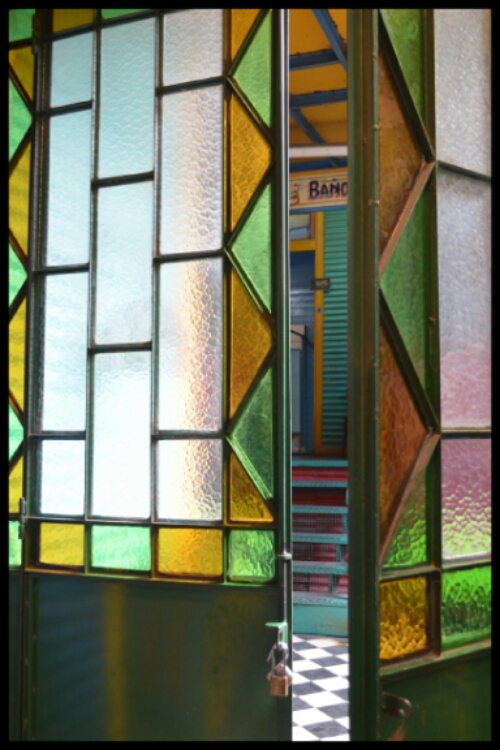 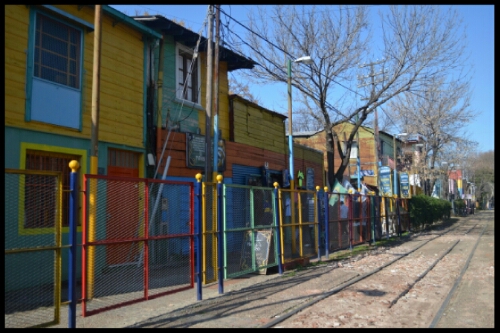 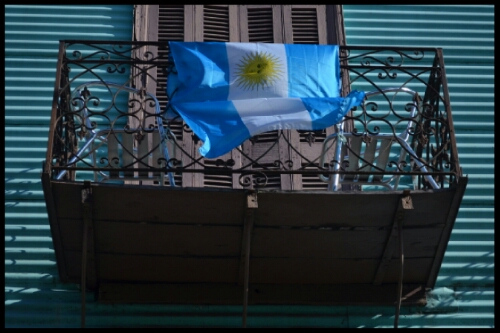 In the evening we had a lovely steak meal courtesy of Alice and Pete Joy, followed by a trip to Notorious jazz club as a gift from Chris and David Turner. The Antigua Jazz Band were a 12 piece who played jazz standards from the likes of Count Basie, George Gershwin and Duke Ellington. It was great! We were late booking so we ended up with a table more or less on the stage! Unfortunately this was in my camera-less hours so I just have a few snaps from our compact camera. 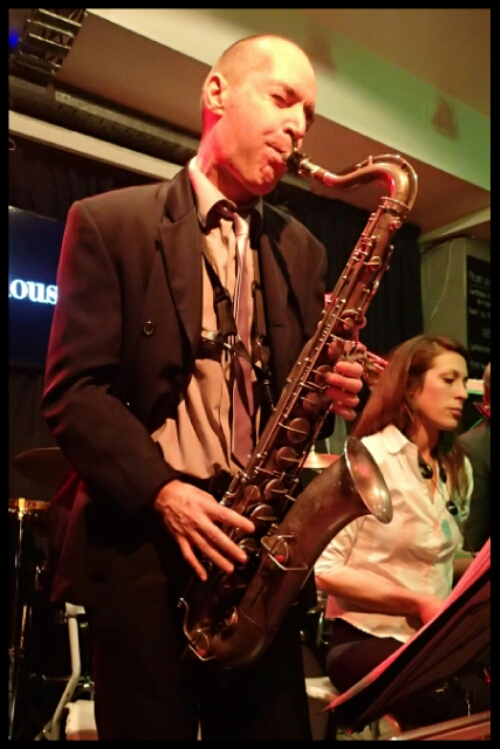 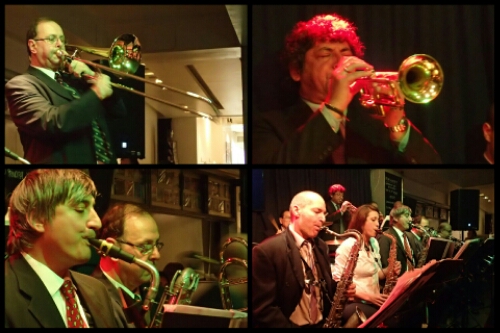 Our third day consisted of a morning of drenched camera retrieval as mentioned earlier and an afternoon drying out with more crime dramas! We did, however spend a soggy hour or so exploring Recoleta Cemetery which is a popular tourist activity in the city (honestly!). The final resting place of the city’s rich and famous is a vast plot set out like a town but where ornate mausoleums in every style imaginable (and all states of disrepair) stand in place of the houses. The only one we recognised was that of Eva Peron – Evita. This website describes it much better than I ever could.

Our last destination in Argentina will be the phenomenal Iguaçu falls on the border with Brazil. I’m lucky enough to have visited before and I’m very much looking forward to seeing it again. It also means our final night bus, hooray!