I like Nicaragua. It’s cheap, it’s full of natural beauty, its tourism is not excessively developed and its inhabitants are friendly and helpful. My only complaint is that its internet accessibility really leaves something to be desired! Amazingly, it’s probably only the second country on our trip where it’s been noticeably problematic. Although frustrating, Nicaragua has reminded me not to take it for granted! You’re reading this because we’re now in Costa Rica!

I have over a week to summarise here so I’d better get on with it!

In continuation of Dean’s week of birthday-ness he wanted to go surfing so we headed to the coast and a tiny village called Playa Jiquilillo. It was devastated by a hurricane about 10 years ago and many houses are still mere shells. We stayed at Rancho Esperanza (Hope Ranch) which aims to support the community through projects like a kids’ club and by offering the services provided by various local people to tourists. It was fairly eco-friendly too with compost toilets and locally produced food which was served ‘family style’ each evening. This was a nice way to get to know a few people which we don’t often do. [Juliette, if you’re reading, sorry I somehow made a mistake in my email address, it should be stephaniejanepatrick@… !]

This was our cabin, home to 2 bats, a large centipede, many geckos and visited nightly by several sizeable crabs! Surprisingly we still slept really well!

Dean really enjoyed surfing, revisiting his teenage years, and was quickly back into the swing of it.

Here are a few other people out on the water.

And here’s some more beach life I snapped. 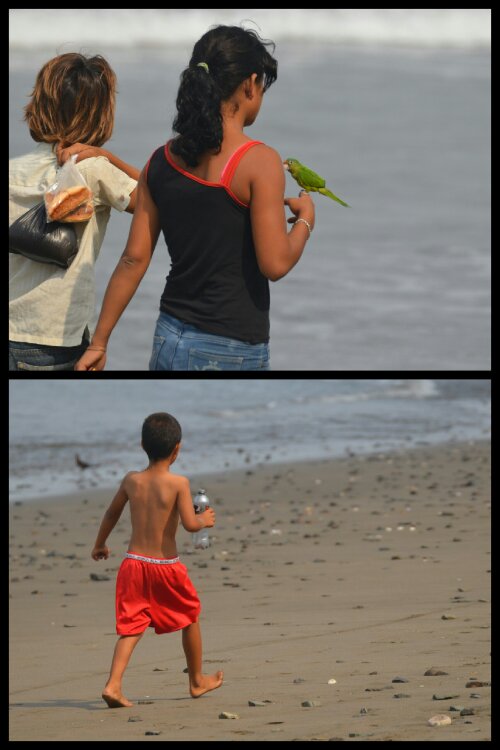 I got my nails done by a local teenager. Very ‘me’ wouldn’t you agree?! I’m prety sure I asked for green but somehow I think it was lost in translation!

The other birthday activity Dean wanted to do was to learn how to make tortillas, a staple food in these parts. To do this we, along with a Dutch couple, headed next door. Technically the process is not very complicated but it’s very messy and a lot trickier than local women, like our teacher Chapita, made it look. All you do is combine maiz flour with water and kneed it for a minute or two.

Then, on a plastic circle, you smooth out a circle of dough. It’s really sticky so this takes some practise. Then you peel the disc away from the plastic and place it on the hot pan. 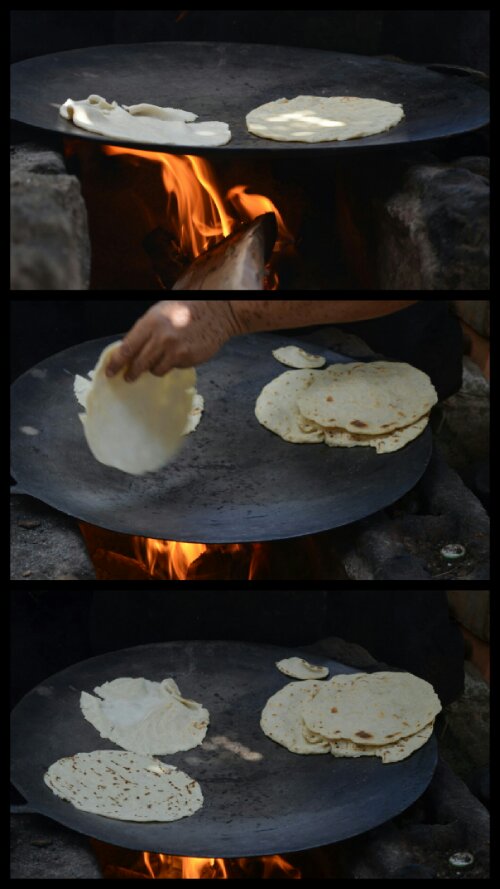 After a few minutes of waiting and flipping, the tortilla is ready to be eaten. Chapita filled ours with a little salt, beans and sour cream. Hot and delicious!

This little girl was, I assume, Chapita’s daughter or granddaughter and enjoyed playing up in front of the visitors and their cameras!

One evening we took a walk along the beach and saw a dead sea snake with a dead fish in its mouth – presumably mutual suffocation! Perhaps not what you want to read about but I thought it was interesting and an unusual once-in-a-life-time sight! Fortunately for the squeamish amongst you I didn’t have my camera with me!

The walk ended with a lovely sunset. Unfortunately most of my horizons are even wonkier than this one so this is all I have to show for it currently. 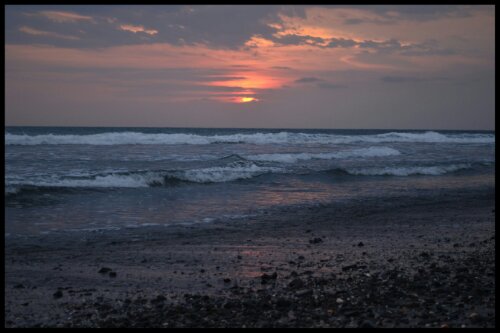 This was a bustling city with a colourful display of daily life and lots of churches and restaurants to keep tourists busy. As it borders Central America’s largest lake – Lake Nicaragua – Granada’s beach happened to be hosting the world paddle boarding championships. We only watched the relay semi-finals but I would have to conclude it’s not much of a spectator sport!

Climbing to the top of one bell tower gave us a great view of the city in the late afternoon light. 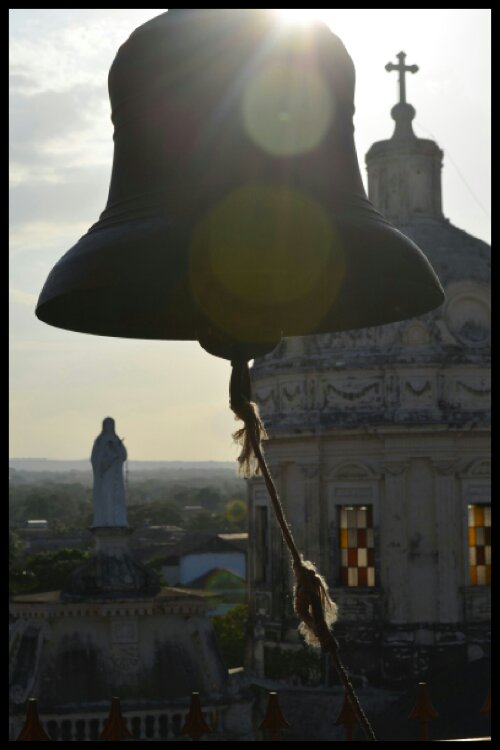 Our other day in Granada was spent on a day trip to Mombacho Volcano. As usual, instead of paying lots of money to join a big, noisy tour group, we did a DIY excursion using a public bus then a tuktuk to get there. The entrance fee included transport up the very steep side of the volcano and on the way we stopped to view a group of howler monkeys (which were wonderfully low down and howling!) and our first ever wild sloth. We were very excited about the latter as we’ve been hoping to spot one for weeks but he wasn’t excited enough by our visit to bother turning around to look at us! 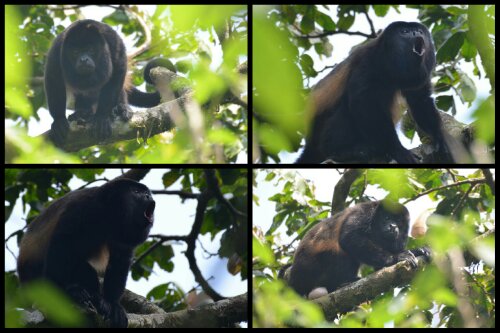 The walking trail circumnavigated one of the craters at the top and led us through a cloud forest. We didn’t see a whole lot of wildlife but it was a really nice walk. Towards the end we emerged to a fantastic view over the lake and its 365 tiny islets made from spewed out volcanic rock. Fields of miniature orange orchids covered the ground and birds of prey circled overhead. 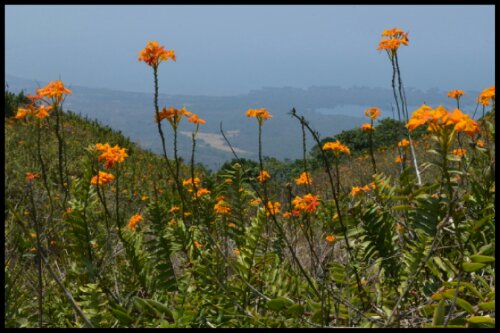 Unlike our last volcano adventure, there were no shoe-melting episodes but we did see lots of fumeroles – very hot holes in the ground emitting smelly (think old eggs or stink bombs) sulphurous gas!

On we travelled, to our penultimate Nicaraguan destination, Ometepe Island which is in Lake Nicaragua. It’s made of two volcanoes – the huge Concepción and it’s smaller brother Maderas – joined by a thin strip of land to form an hour glass shape. Concepción is an active volcano which last erupted in 2010 and is a perfect, symmetrical storybook shape. Maderas looks more like a forested hill and has lain dormant so long that it’s believed it could be extinct. We stayed on the slope of Maderas at Finca del Sol (farm of the sun). Our little cabana, with its great view, was solar powered, used spring water and had another compost toilet.

Many reviews we read for other nearby accommodations mentioned night time visitors such as scorpions, toads and a boa constrictor so we decided to use our wedding present from Helen Troughton to splash out on this far nicer place than we would usually go for. We only shared with with a cute baby frog, geckos (which we love) and some big ants!

The farm was generally experiencing the lifeless end of its dry season but the 500m walk from our cabana to the breakfast area gave us chance to do some lazy wildlife spotting. There were loads of these blue magpie jays, as many as you might have pigeons in a British garden! 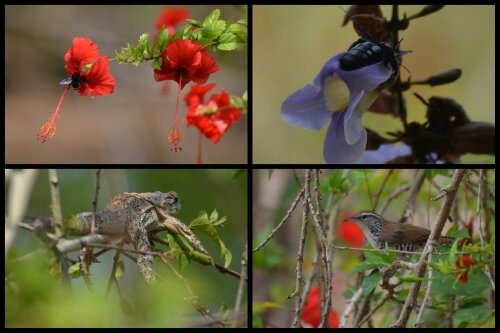 But feeding on the hundreds of beautiful red hibiscus flowers we also found hummingbirds! They move so quickly and are often so small that I’ve never really managed to take a non-blurry photograph. However, we watched the habits and patterns of one in particular and spent a good hour or so photographing him. We named him Ernesto Hummingway. 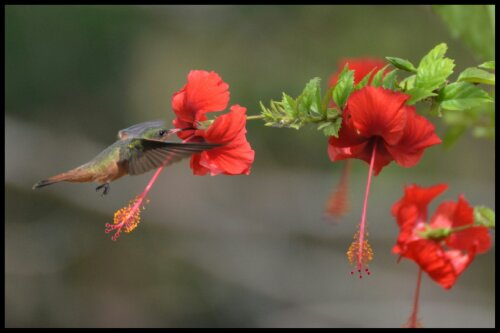 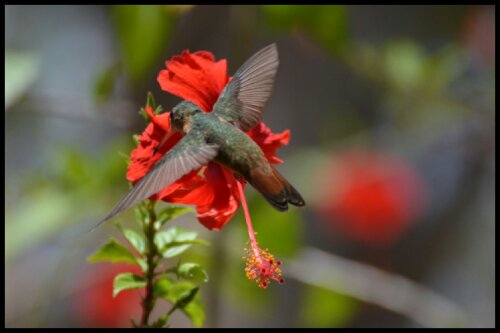 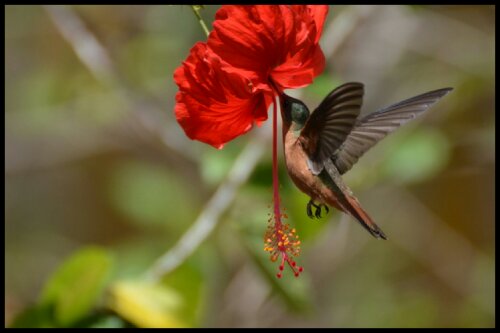 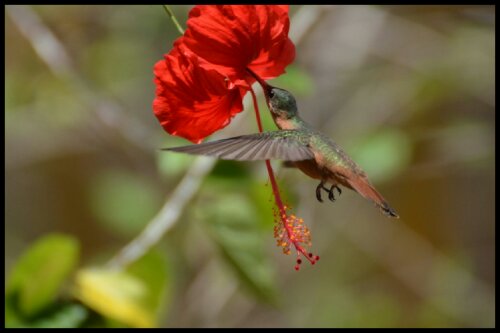 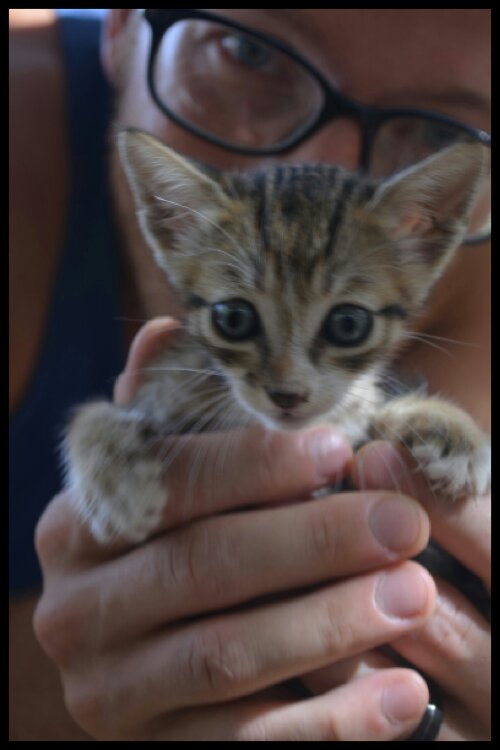 We decided not to attempt the gruelling trek all the way up Maderas and instead opted for a several hour hike up to a mirador (viewpoint). With the temperature in the mid-thirties, a strictly rationed water supply and a very challenging incline, there were many times I would have liked to turn back. I’m glad we didn’t though as the view was amazing when we finally arrived and the downhill walk was much easier.

Although we didn’t see them, we heard groups of howler monkeys calling each other; I even got them to answer me! 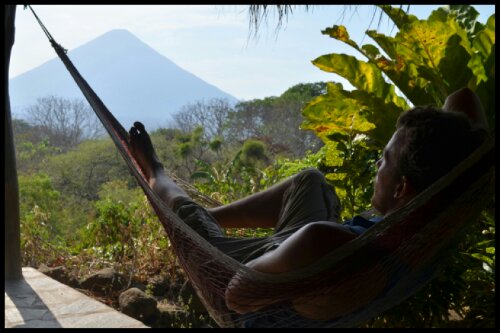 Both our evenings on Ometepe were spent in a restaurant with a great sunset view of Volcan Concepción. 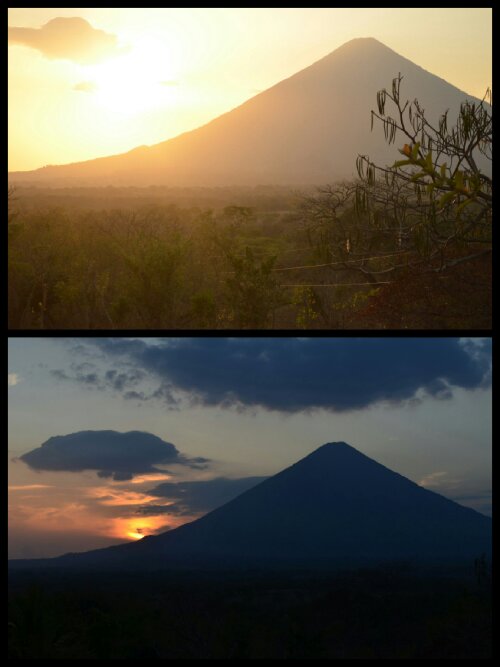 To reach our final destination, we had to take a 12 hour night ferry across Lake Nicaragua. I was dreading it but my travel sickness tablet knocked me out and we managed to end up with a whole bench each to lie on so the night passed illness free! On arrival in San Carlos we took another much smaller boat two hours down the San Juan river where we stayed the night in the company of another bat, another frog, a few large cockroaches and various other smaller creepy crawlies. There was a free horse ride through fields of cows and a forest where we saw monkeys and flocks of green parrots. This is a tame one that lived on the farm and cleaned the plates after dinner.

The main reason for making the long journey to this area was so that we could cross the border to Costa Rica in a boat, something we’ve not done before. It was a lot more peaceful and enjoyable than land crossings and there were plenty of birds and howler monkeys to spot on the way.

That brings us to a town called La Fortuna, a stop over on the way to Monteverde, where my main objectives are a completely animal free room for the night and a hot shower! We shall see!