After a few days in the Campania region of Italy, visiting Pompeii and the Amalfi Coast, we took a comfortable, punctual, reasonably-priced train ride down to the town of Lecce – in the region of Puglia – which we used as our base to explore the stiletto ‘heel’ of the ‘boot’. It was far quieter than the first half of the trip; as the busier big towns receded in the rearview mirror, the farmland and olive groves became more plentiful and a sleepier, more tranquil way of life emerged.

From our wonderful Airbnb base, we hired a tiny car and took day trips up and down the coast before heading inland as far as Matera and onto Bari for our flight home. Most days had many stops along the way but here are our highlights!

This grand, baroque-built town is over-flowing with churches and palazzi which emerge – suddenly, improbably – around every other corner in the warren of paved streets. If you enjoy admiring the finer details of stonemasonry, this place won’t disappoint as there’s also a castle, a cathedral, the ruins of a Roman amphitheatre and a palace to discover.

However, for me, the peeling paintwork of ancient doors, the little tucked-away artisan galleries and the floral balconies are just as much of a draw as the ornate limestone architecture. 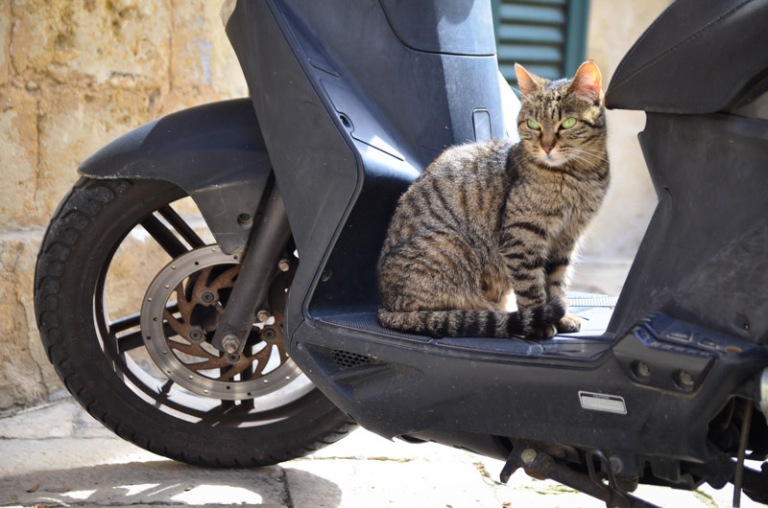 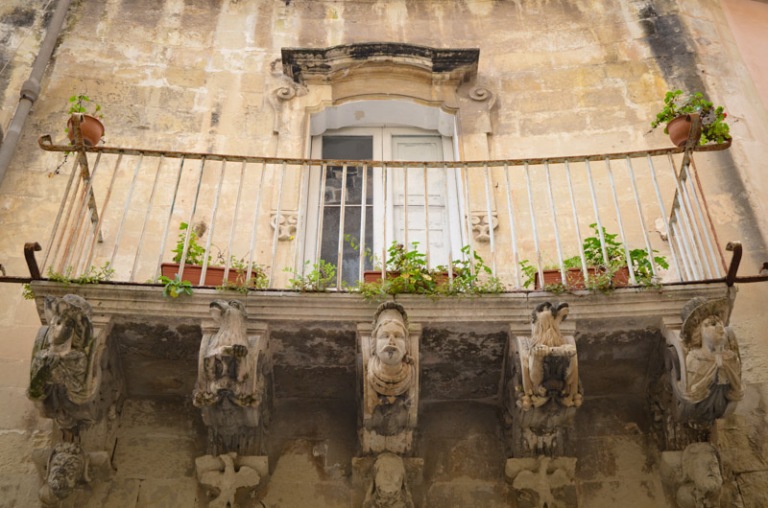 An absolute must-see is the unassuming Museo Faggiano: a home which has been lovingly excavated to reveal the building’s rich history dating back to the 5th century BC. There is information translated into English for a self-guided tour, including a roof-top view, tombs, secret tunnels and the living quarters for a convent with an impressive domed roof made of bottles. 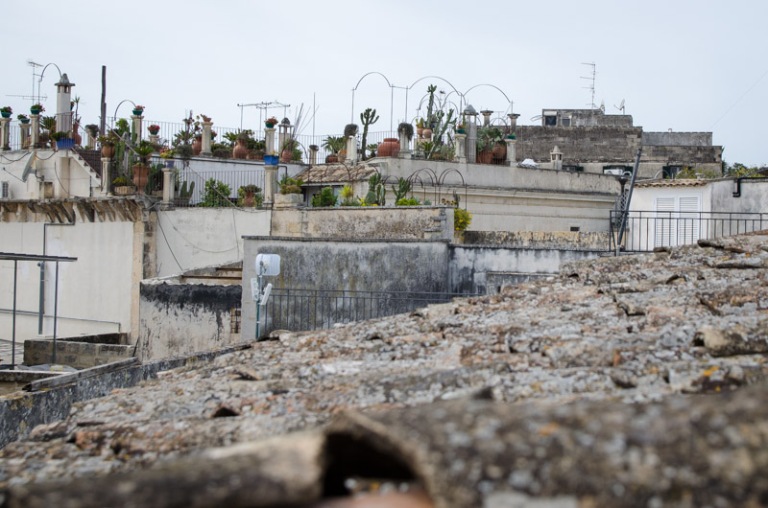 Down the coastal road south of Lecce, you come to an unassuming layby. Parking up and taking a short walk towards the craggy coast, you’re rewarded with a view out to the crystal-clear sea, from an enticing yet inaccessible cove. 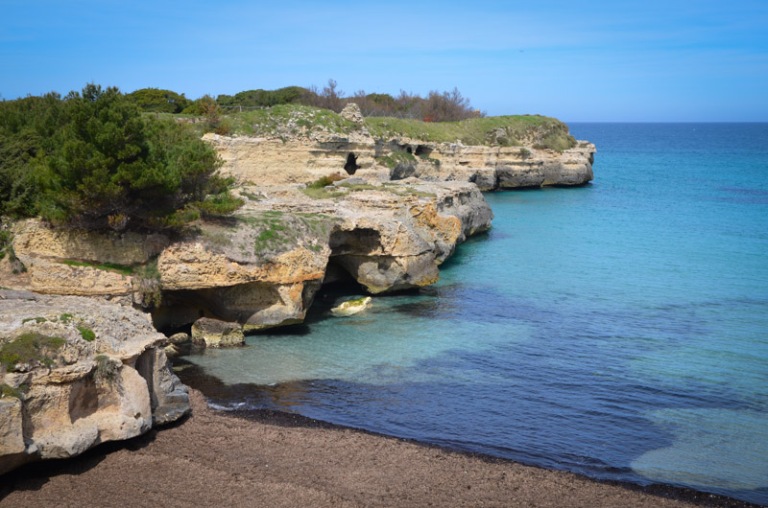 Nearby is a stunning natural pool. Its name means Cave of Poetry, so called because, according to legend it was the chosen bathing spot of a beautiful princess; once word of her beauty spread, it inspired poets far and wide. You can easily understand why. 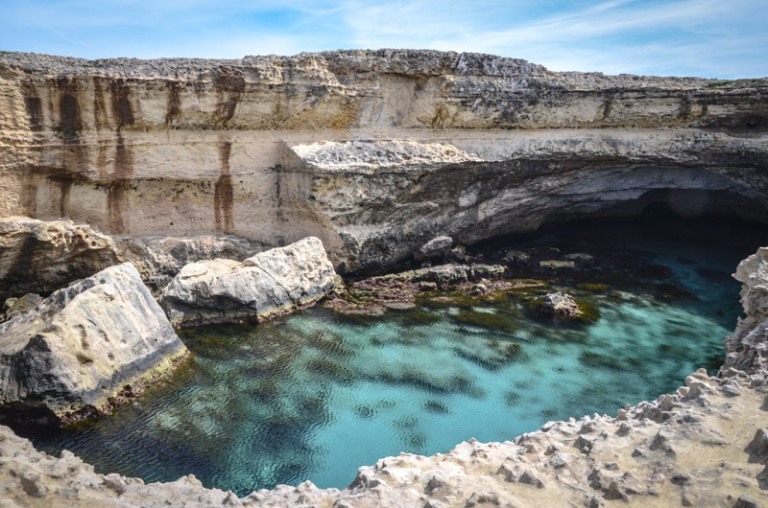 Whilst there we saw locals don scuba gear to explore the underwater caves and, in warmer weather, it’s a favourite place for cliff-jumping.

Perhaps because we were visiting out of season, it felt like we had this beautiful little hilltop town all to ourselves. Every building lining each twisting, turning alleyway is white-washed, complimented everywhere by green woodwork and colourful pots of flowers. Beyond the church and a few shops and cafes, there’s not much to ‘do’ but it didn’t seem to matter. 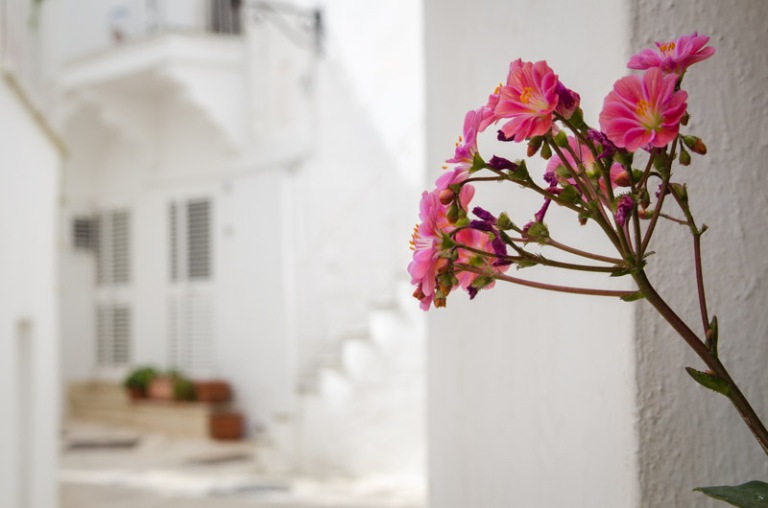 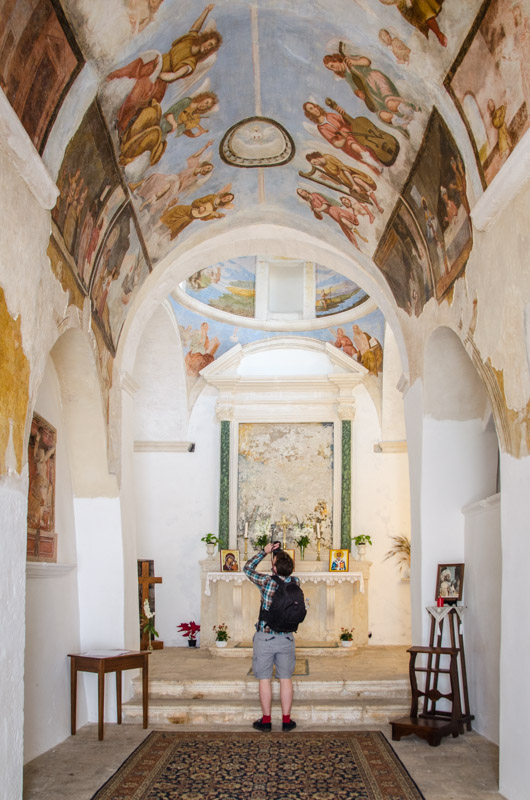 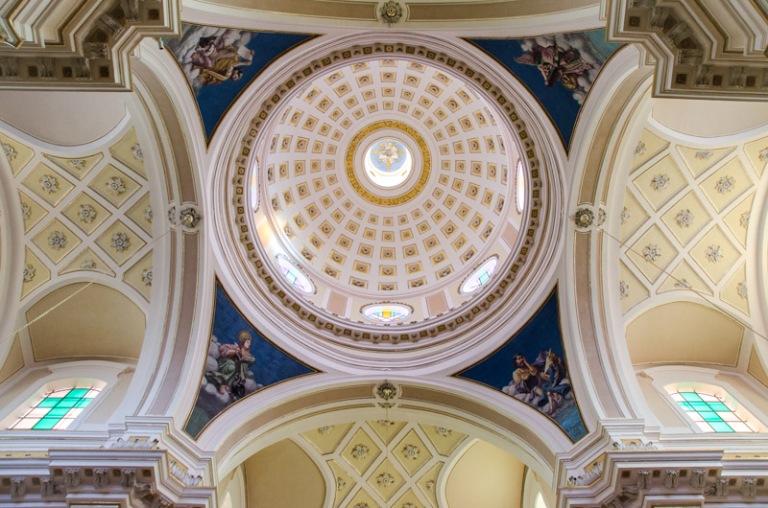 So long as you can look past the touristy-ness, this is a really unique location. You know you’re approaching trulli country when the ever-present stone workers’ shelters in the fields begin to change from conventional angular designs to round structures with conical roofs. 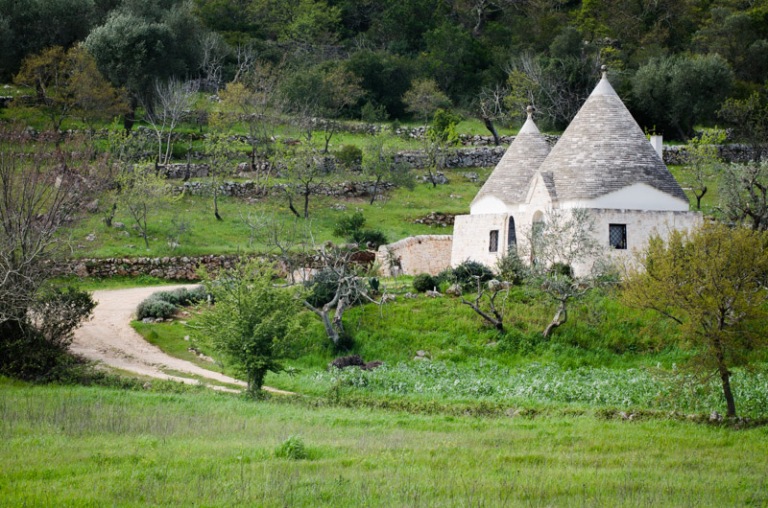 Beyond the fields, clusters of these unusual 14thcentury dry-stone trulli form quirky houses, and nowhere more so than the UNESCO town of Alberobello where there are over a thousand huddled together. Here the limestone buildings have white-washed walls and a few have symbols painted on their roofs, intended to protect their inhabitants. At the very top, each has a sandstone pinnacle: the trademark of its stonemason. 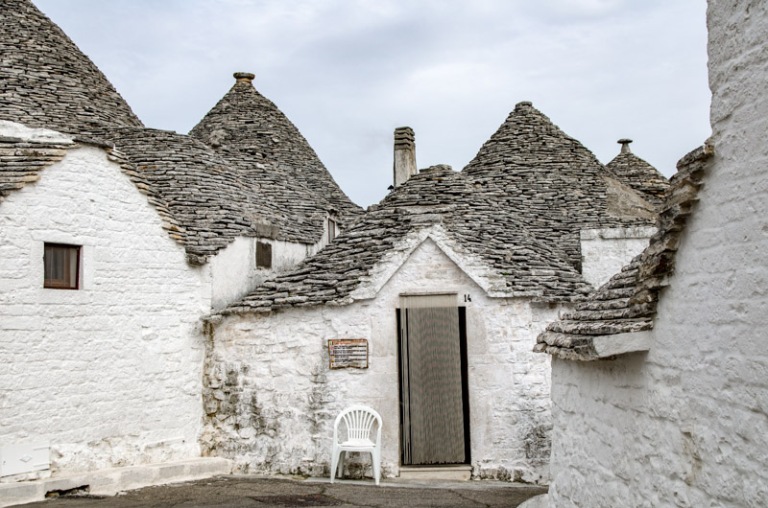 Many of them have now been turned into souvenir shops, cafes and holiday lets so you certainly won’t have the place to yourself but it’s definitely worth a visit. We were rewarded with a little more peace and quiet when we took a stroll around a more residential area.

We discovered Otranto late one afternoon just as the sun was beginning to go down. We were after little more than an ice cream and a sunset view. 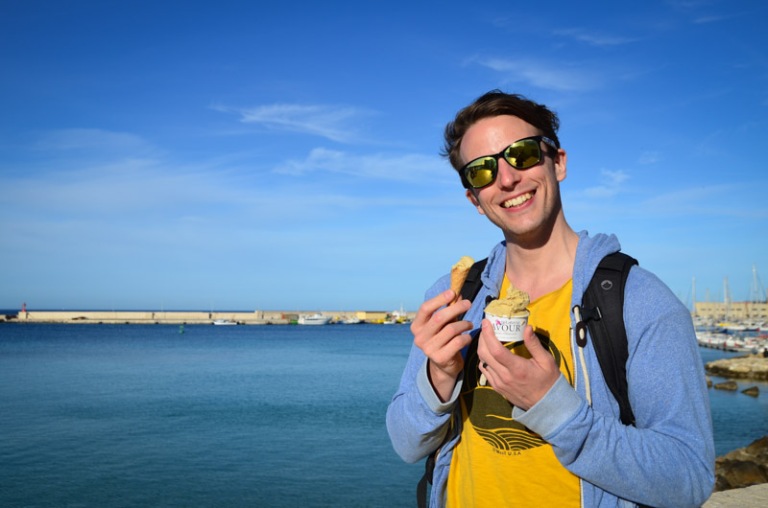 It’s heavily fortified, with high walls and towers, due to its vulnerable position on the peninsula and its history of invasions. 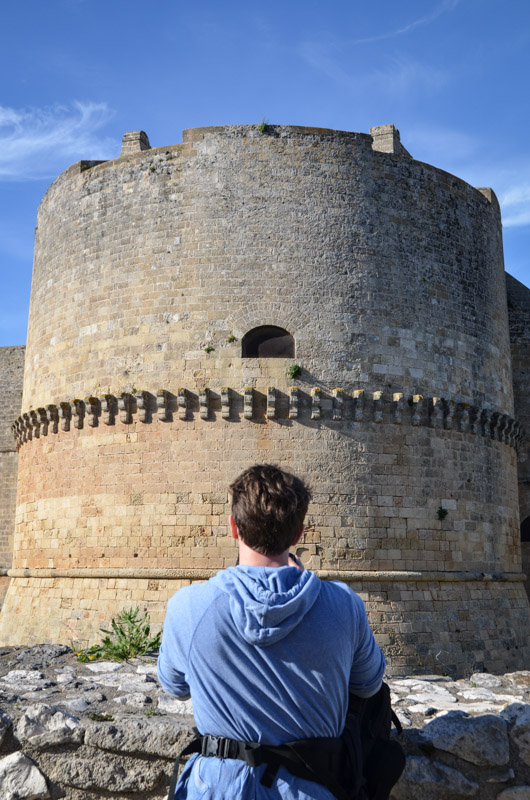 Having wandered into a number of churches already that day, we were anticipating more of the same. But Otranto’s 11thcentury Norman cathedral, albeit in need of a lick of paint, delivered far more than expected. Its floors – entirely covered by a vast mosaic – were truly incredible; its roof was impressive; and behind the altar was a macabre display of the bones of 813 martyrs. 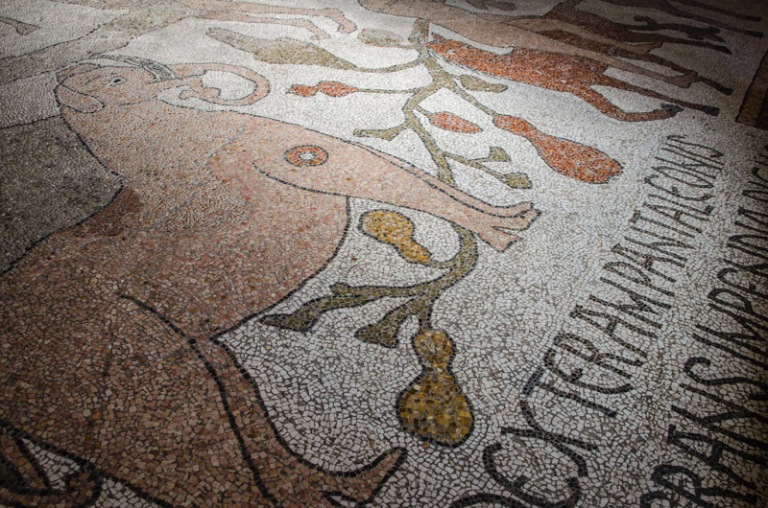 The icing on the cake was a visit from some nuns-on-tour who, when faced with the glass cabinets of bones, whipped out their smartphones and began snapping away! 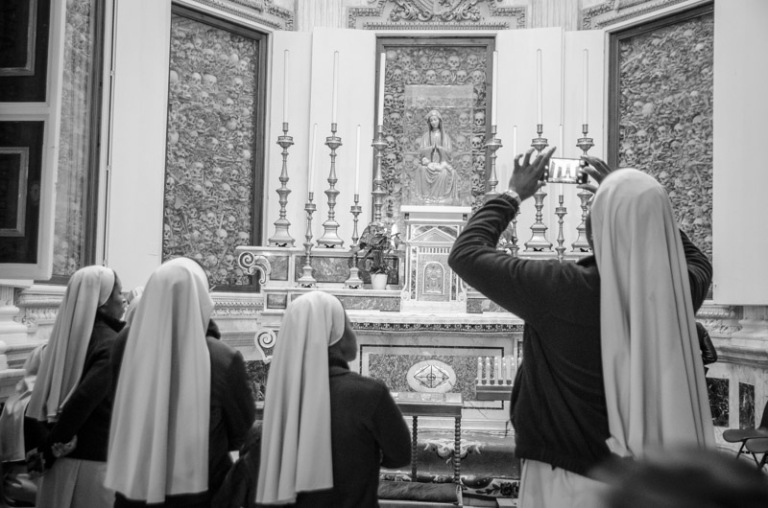 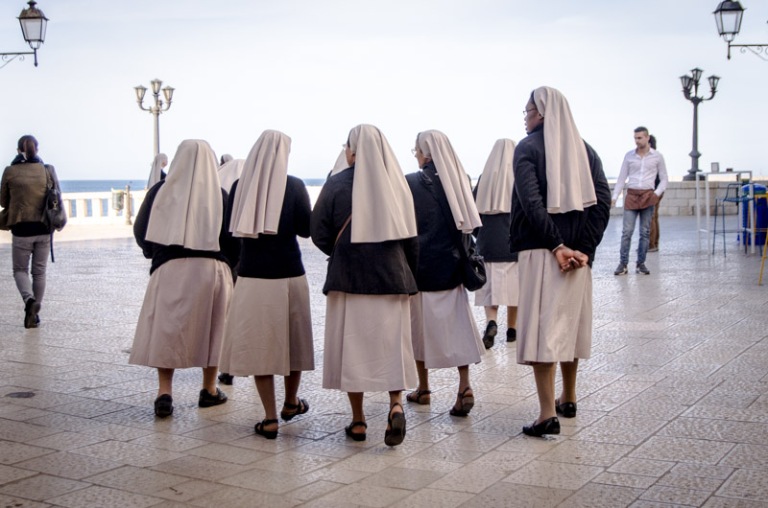 OK, OK, so, technically this is in the region of Basilicata, not Puglia, but only by a few kilometres and it was my absolute favourite destination of the trip. I’d never heard of Matera before but it turns out it’s set to be a UNESCO site and the European capital of culture for 2019!

Essentially, it’s a city built from ancient natural caves – sassi – on one side of a steep ravine. It’s actually the third-longest (or second, depending on who you ask) continuously inhabited settlement in the world and has the look of the ancient Holy Land. 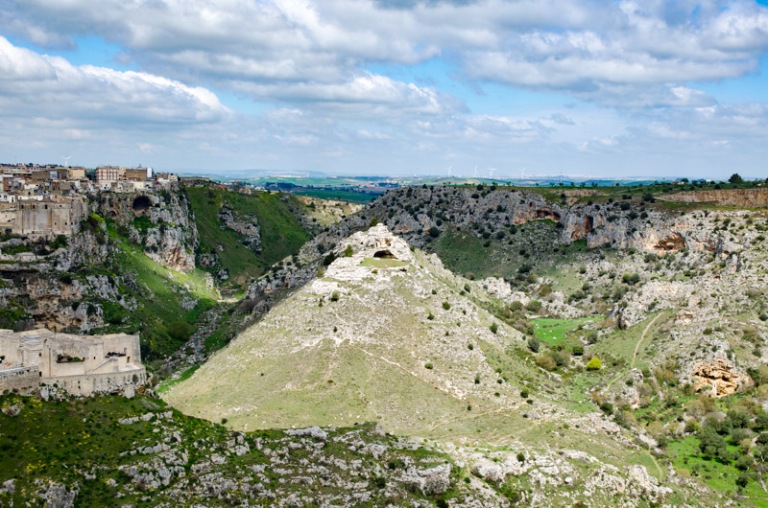 The city has a fascinating past. The original caves were extended outwards and added to over the course of thousands of years, resulting in an incongruous higgledy-piggledy huddle of buildings, overlapping and vying with one another for space. These pictures give a little sense of what I mean: 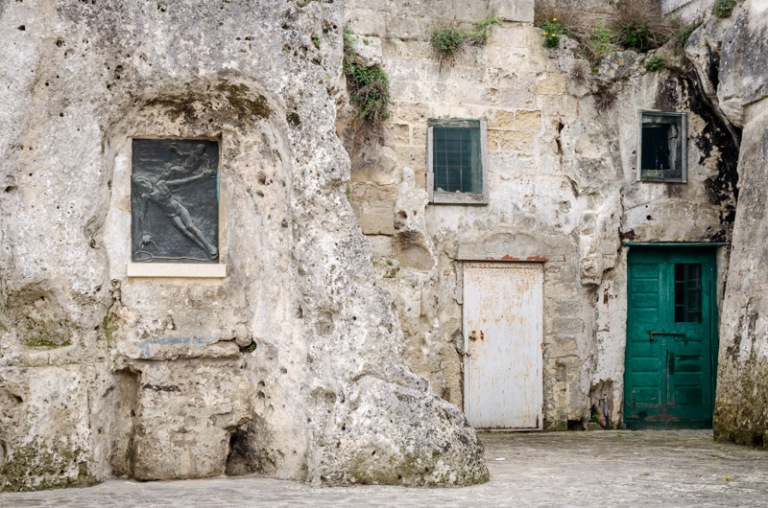 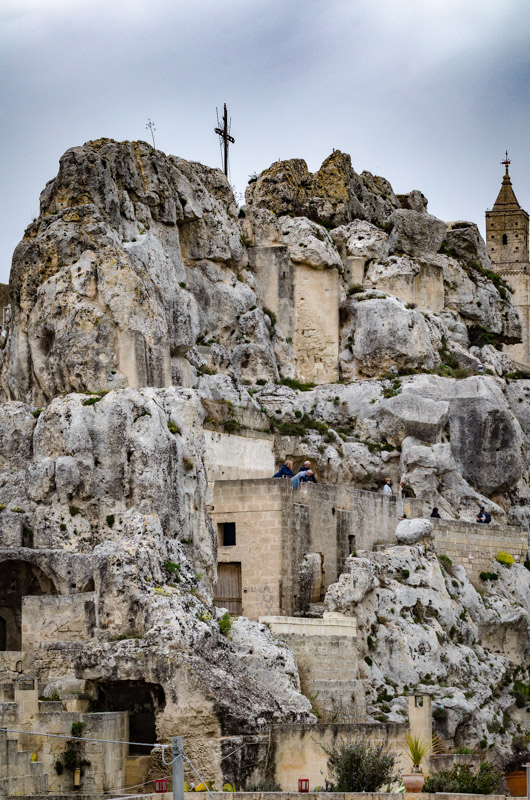 By the 1950s, the city had become so over-crowded, so impoverished and so over-run with malaria and dysentery, that it was labelled the ‘shame of Italy’. The sassi dwellers were consequently forcibly re-located and the area remained largely abandoned until the 1980s when a collection of archaeologists and politicians rejuvenated it and began the process of turning it into the thriving town it is today.

The old town comprises two halves: Sasso Barisano which has been extensively restored and Sasso Caveoso which remains more disadvantaged. In between is perched the duomo – the cathedral. This first picture is of the poorer part and then a view back over to the other side of the ravine:

If you enter many of the restaurants, shops and hotels, which look only a few hundred years old from the outside, you find the cavern hidden behind the façade. Always curious about how people used to live, my favourite attraction was Casa-Grotta di Vico Solitario – a sassi which has been restored to show what a house would have looked like. It was very compact given a whole family would have lived there: there was one bed for the adults, the baby had a cradle at the foot of the bed and the other children would have slept upon boxes or tables. Then there was a loom, a small kitchen and all the tools and personal effects of the family. A horse lived in the main room too and there were small additional spaces at the rear to house farm animals and a manure trough for heating! It was dark and would have been almost impossible to ventilate – imagine the stench! 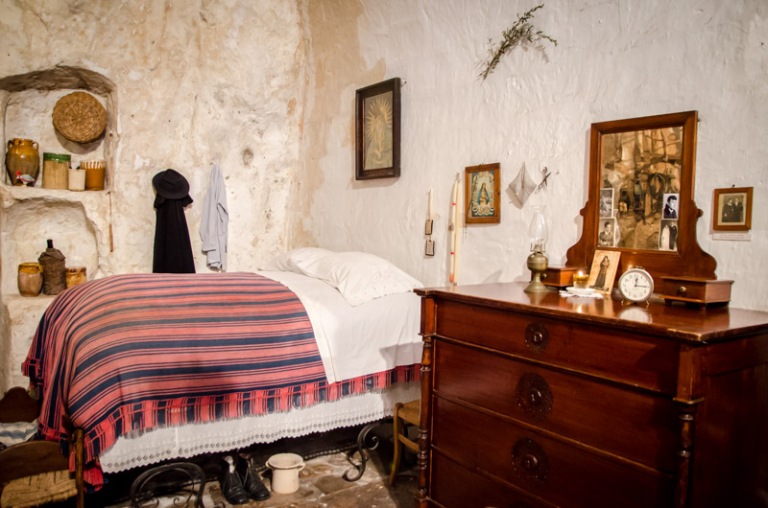 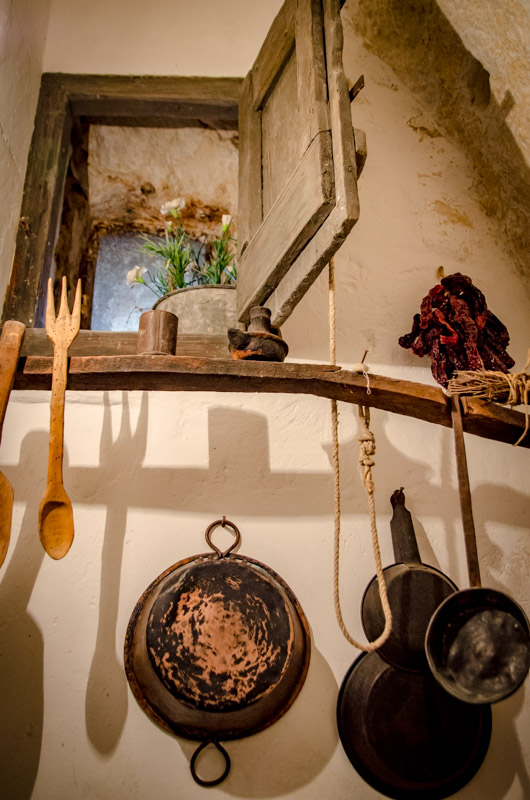 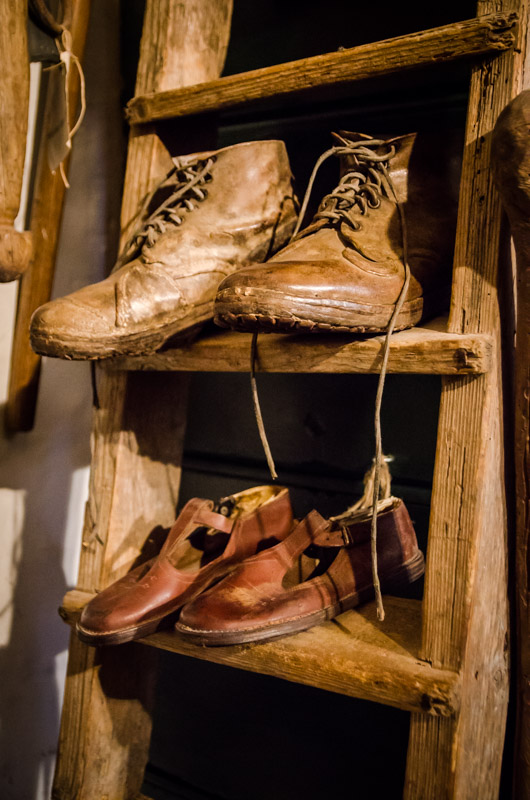 Astounding churches, built into the rock, are scattered about the city too. The frescos are incredibly well-preserved given their age, although sadly a lot of the altars and religious artefacts were plundered over the years of the town’s abandonment. Photos weren’t permitted so you’ll have to visit yourself! Beneath one, San Pietro Barisano, these niches were part of a ritual where priests who died were sat and left to drain and decompose! 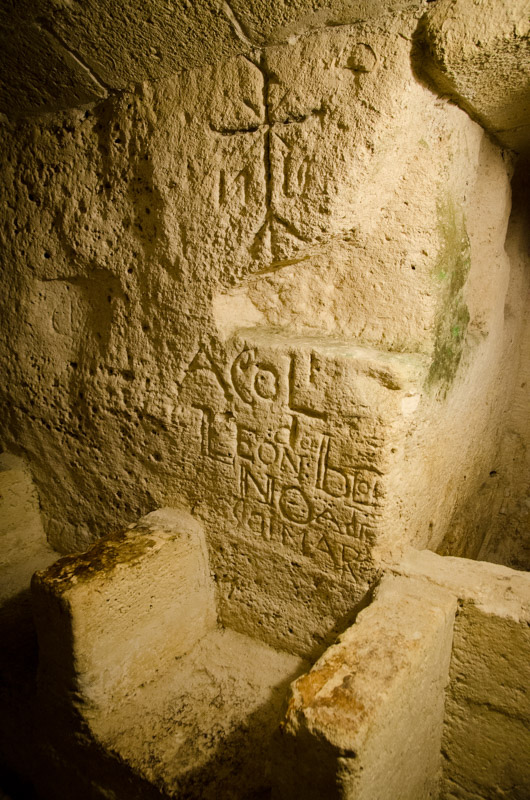 This was the view at night, a church in the new town (if I remember correctly) and a game of hide-and-seek with a lizard: 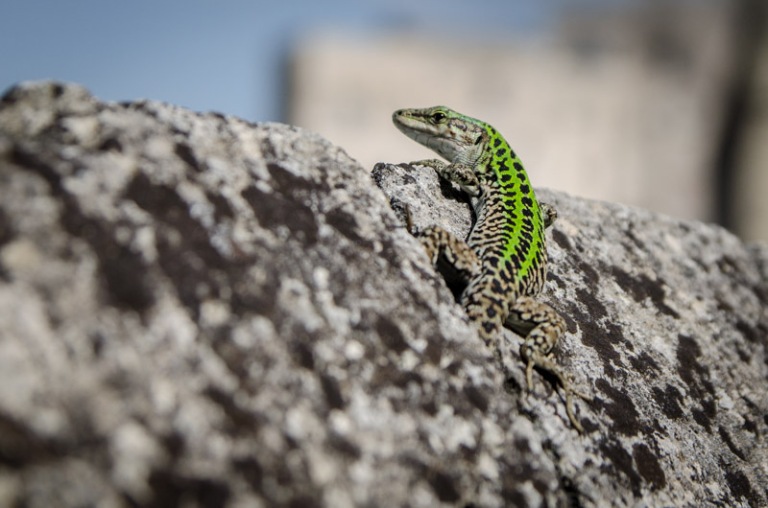 After a day in the old town, we spent our second day roaming the other, much greener, side of the ravine where there are empty caves with signs of their long-gone inhabitants and hundreds of rupestrian rock-hewn churches. Our hillside rambling was rewarded by wonderful views back over to the town. 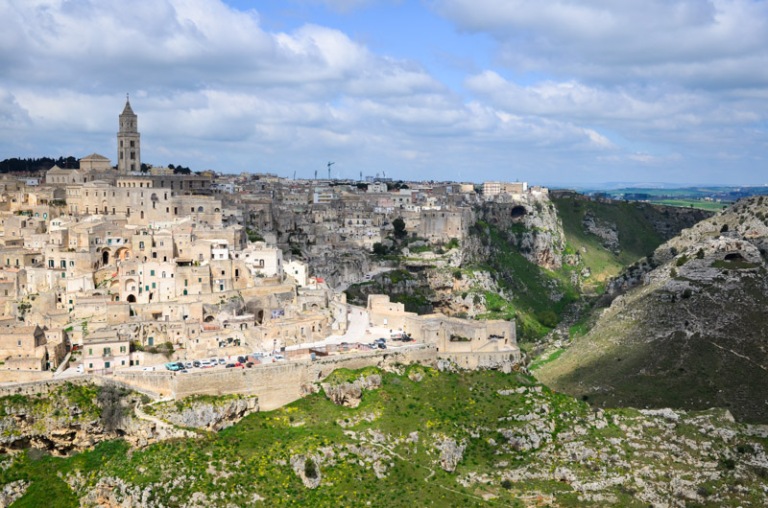 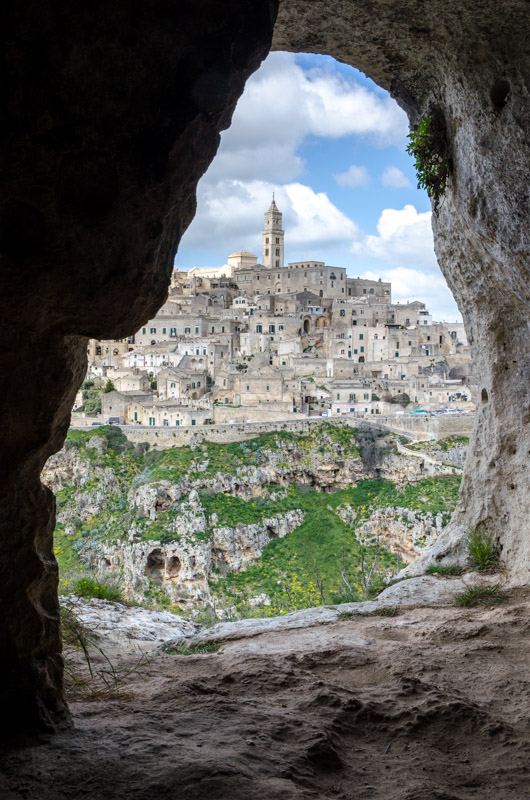 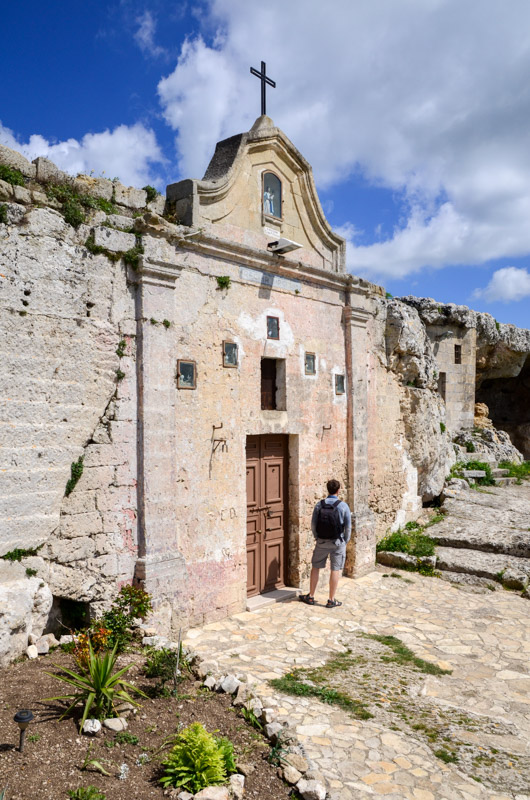 A couple of other recommendations are Casa Noha – a fantastic audio-visual introduction to the sassi – and the best ravioli ever at the one-man show that is Kapunto.

You can read a more in-depth history of Matera here.

And finally, a few other stops we enjoyed:

Polignano a Mare – a lovely little town half an hour away from Bari. 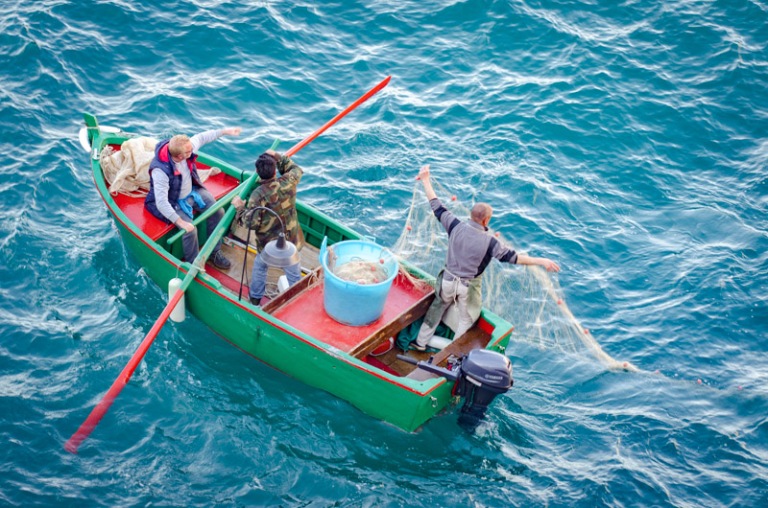 Plans are now afoot for our next Big Adventure – to Madagascar!