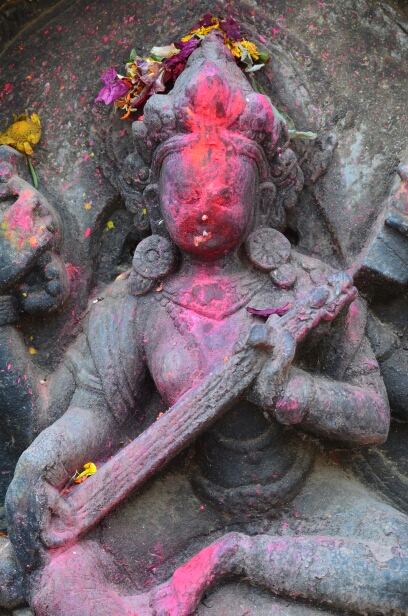 Namaste! Time is flying! We’ve already finished the all-too-short Nepal section of our trip and have decided we really need to come back another time to see more of the countryside and the Himalayas! This first post is about our time in Kathmandu itself and the second will be about the surrounding towns in the valley.

Don’t get me wrong, we’re big fans but Kathmandu is not for the fainthearted! It’s incredibly busy: every thoroughfare, from the new multi-laned highways to the smallest passages teems with two-way traffic. The vast majority of people get around on foot. Then there are a few pushbikes and, in the old town, cycle rickshaws.

Sounds peaceful enough… until you blend in the continual stream of motorbikes, tiny taxis and trucks, filling the air with fumes, noise and clouds of dust! Shop owners spend their days beating dust from their road-side wares, more affluent locals and visitors alike wear face masks and, despite otherwise very litter-free streets, your feet are filthy within minutes of stepping outside! A few people have told us this is because of new water pipes being installed around the city and because it’s the dry season so perhaps it’s not like this all the time.

As well as large vehicles, you regularly have to avoid people carrying seemingly impossibly giant loads on their backs!

As for how this all works, well apparently the only rule is that everyone is meant to travel on the left. However, this is only very loosely adhered to; instead there seems to be much more of a ‘best fit’ policy! Horns are used more frequently than indicators although a law prohibiting unnecessary horn use was introduced during our stay and it did seem to make a difference. The bigger the vehicle, the more likely it is to gain priority. Pedestrians stick to the outside but, due to their sheer volume, a lot of overtaking is necessary. Poor, masked traffic officers stand gesturing on raised platforms at busy intersections. Helmets and seat belts are worn but only by drivers. Crossing a road is nigh on impossible! And then there are the free-roaming cows which essentially do as they please!

That said, we’re not new to this kind of city and we generally find the bustle quite fun! The other payoffs are well worth it of course. There’s so much colour: the saris, the fruit, the painted signs, the religious offerings. We love wandering, people-watching, photographing. 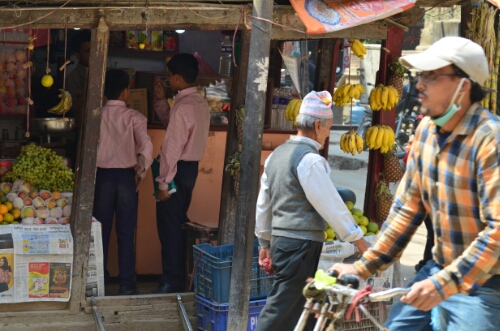 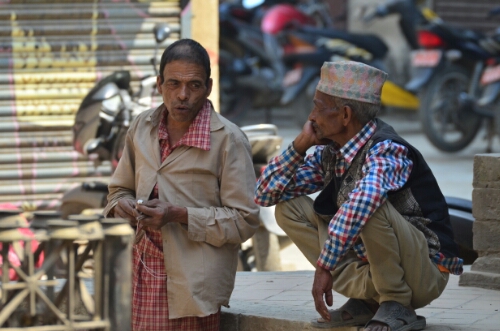 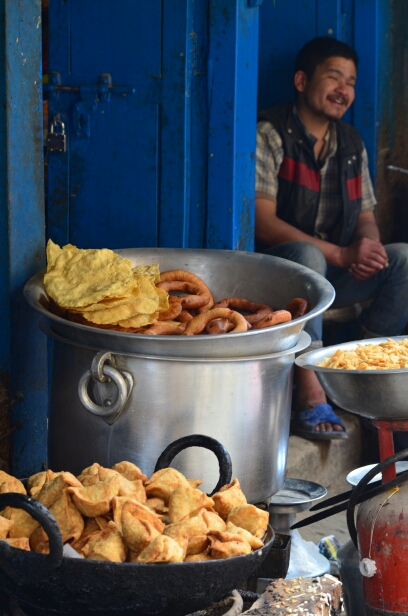 Finding your way around the city is also an interesting challenge as, whilst your guide book map may have handy street names on, the streets themselves generally do not. The concept of addresses doesn’t exist. Consequently you find yourself remembering a route using a Shiva statue, a butchered goat, a roadside tailor and a grinning dentist’s sign as landmarks. Fortunately one of Dean’s superpowers is navigating the seemingly unnavigable so we didn’t go far wrong.

To contextualise the area, it’s important to remember the severity of the April 2015 earthquake in which over 8500 died and thousands became homeless. The effects of the quake are still very evident in the piles of rubble and new building materials; the red warning signs; the scaffolding and wall supports; the huge cracks in remaining buildings and voids where others once stood. 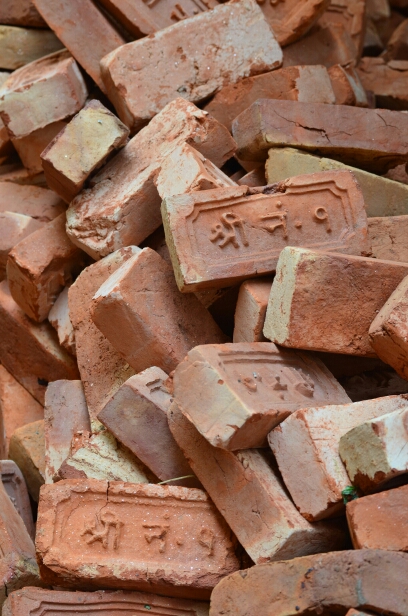 The older buildings that survived are interesting. Most have a shop at ground level, often with low, painted wooden doors. Above are homes, usually at least two floors and up to six! Often upper storeys have ornate carved wooden window frames. They’re powered by a chaotic jumble of cables. This is actually a fairly organised example!

If the noise and dust gets too much, you’re never far from a little courtyard to duck into. Each courtyard (chowk) seems to be a little neighbourhood with houses all around the edge. Adults sit and chat, some ply a trade, some survey the square from balconies or windows, and seemingly unsupervised children (enjoying school holidays at the moment) play, often terrorising the pigeons that come to scrounge food from the offerings. The first we entered was home to the Kathesimbhu Stupa. I think I’ll leave the details of the different religious elements for my next post. 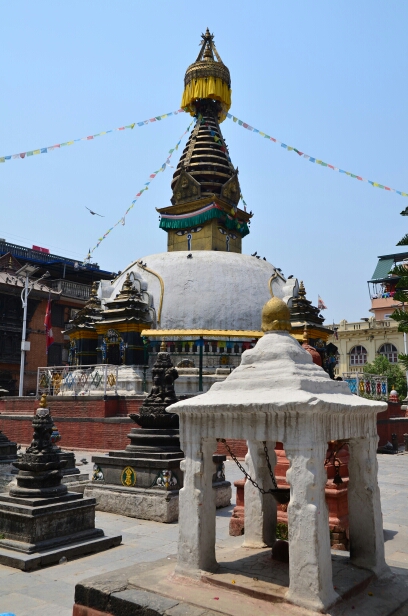 In another such courtyard was Seto Machhendranath Temple.

A Buddhist monastery courtyard is called a bahal and the peaceful Itum Bahal is the old town’s largest. 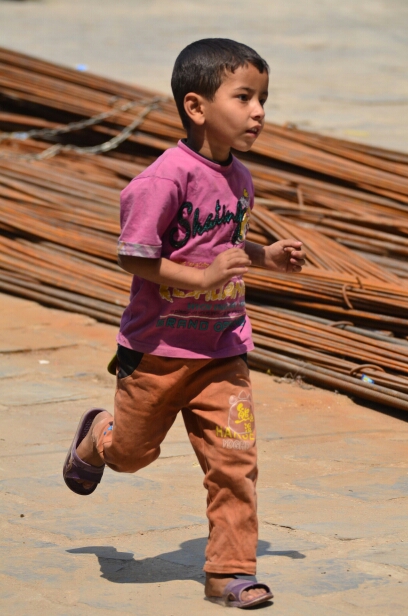 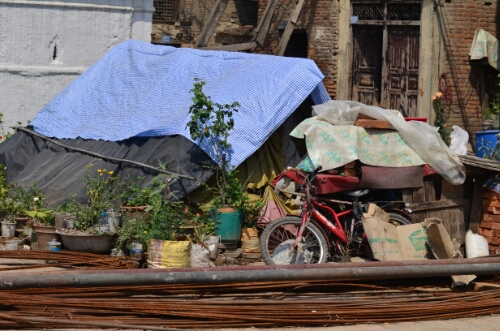 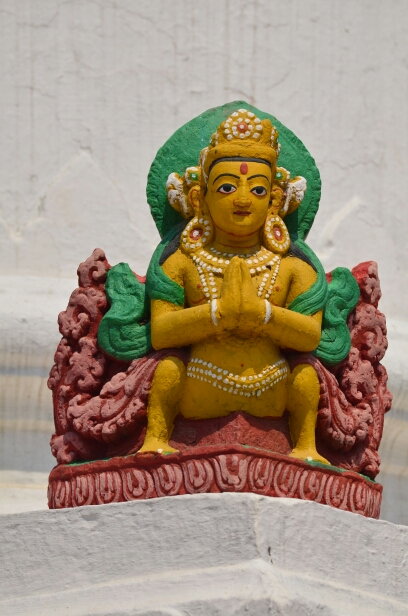 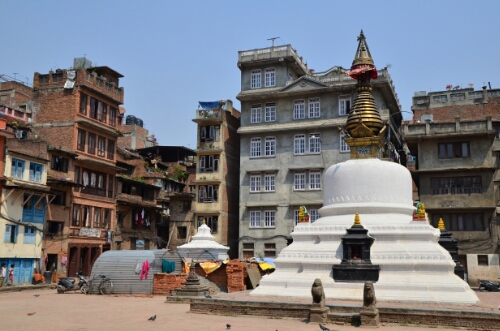 Hindu shrines are literally everywhere. All shapes and sizes, all deities. Small ones appear at the sides of roads or set between two buildings. Then there are larger examples in squares (toles) which are more commonly used and are sometimes dedicated to gods of particular things. At Bangemudha square, near a row of dentists, is the wooden shrine to the toothache god, which has had coins nailed all over it, presumably by sufferers.

At Asan Tole, the old town’s busiest junction, we took photos of a rickshaw driver and watched for a while as devotees bought candles from an old lady, prayed and circled a shrine.

Further on, in Indra Chowk, we stopped to join the crowds sampling a lassi and did a little more people-watching. I was also accosted by a man who painted my forehead and put a flower on my head!

Nearby was a little hidden market glistening from floor to ceiling with beads and bangles of the kind married Nepali women wear. On the floor of each shop sat a man threading more beads, using his foot to anchor the end of the string.

Durbar (palace) Square is at the centre of the old town and costs 1000 Rupees (£7.50) to enter. We had a spot of lunch over-looking the square before we explored which gave us the opportunity to appreciate the extent of the earthquake damage. 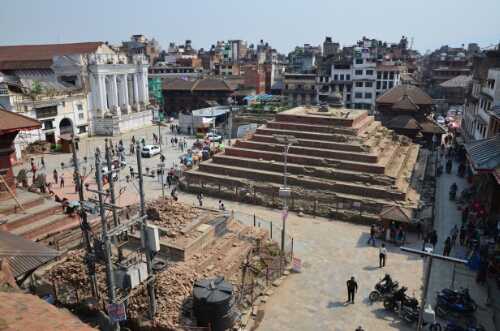 Centuries-old temples and stupas have been reduced to rubble and, with the best will in the world, it will take the authorities years to restore them to their former glory. A few sights from around the square include a row of waiting rickshaws; Shiva and his consort looking down from the Shiva-Parvati Temple; devotees praying for safety on a forthcoming journey at the Ashok Binayak – an important but tiny golden shrine to Ganesh; and, opposite, a golden shrew, Ganesh’s vehicle. 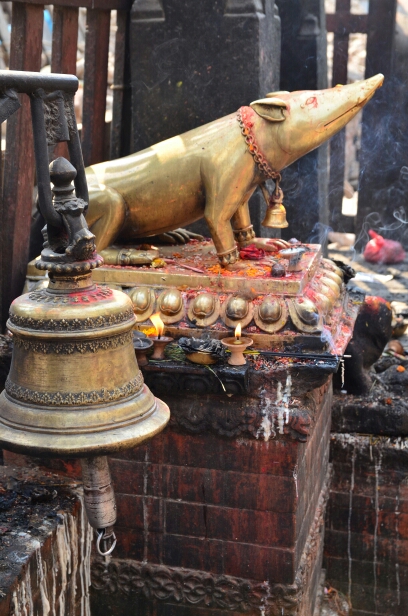 Apart from when she was temporarily chased away by a police woman, this lady was one of several selling grain for feeding pigeons at the base of the toppled King Pratap Malla’s Column.

One of the main highlights in the Durbur Square area is Hanuman Dhoka, the royal palace. We sat on the coronation platform in the grand Nasal Chowk, one of the 10 (of 35 originally) remaining courtyards, to read about it.

Sadly, though, much of the palace was severely damaged including the Basantapur Tower which once stood at nine storeys.

Next we took a rickshaw to the UNESCO site of Swayambhunath. It’s also known as the monkey temple but we didn’t see many due, I assume, to the number of people there. 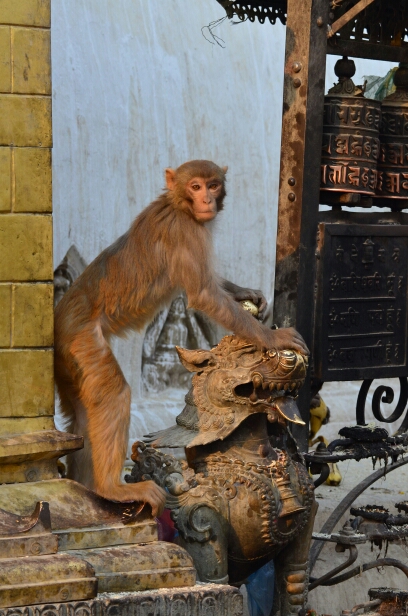 It was incredibly busy. We’re not sure if that was normal or a consequence of it being Nepali new year’s eve and thus a public holiday. Generations of families, dressed in their finest clothes, gathered to picnic before ascending the stepped hill to the stupa. Teens, dressed to impress, visited with their friends. Some monks climbed in twos and threes whilst others sat on the ground leading prayers and offerings with devotees. Beggars (like the little boy on the statue) stared hopelessly. Old men sat lower down in the shade, watching the crowds and listening to the loud speakers. Vendors sold icecreams and offerings. 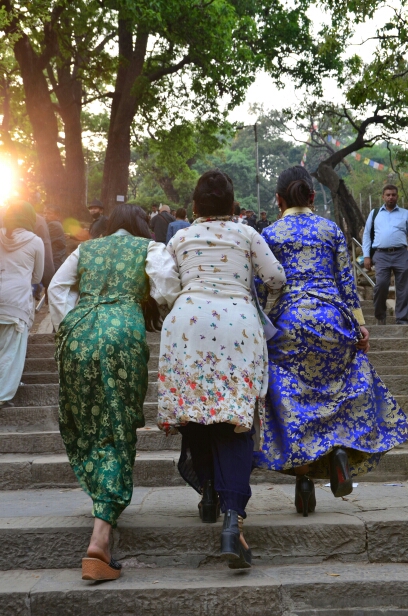 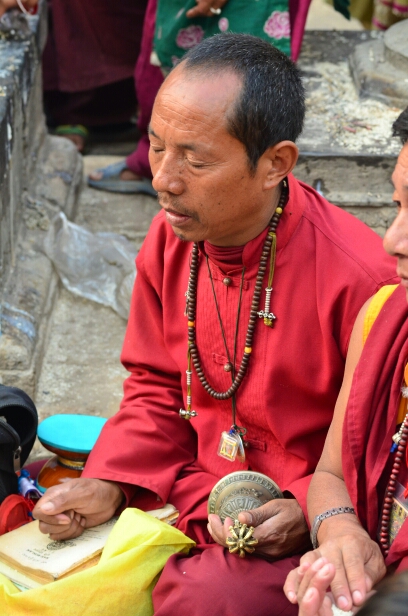 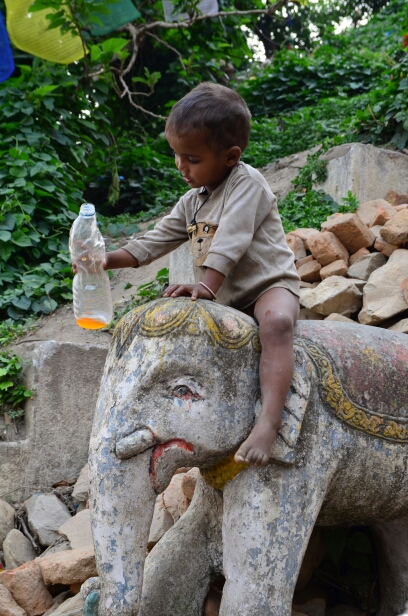 Once devotees reach the top and have spent a moment looking over the city, they circumnavigate the whitewashed, golden-topped stupa clockwise, spinning the prayer wheels, ringing bells and touching various statues and doors with their fingers and foreheads. 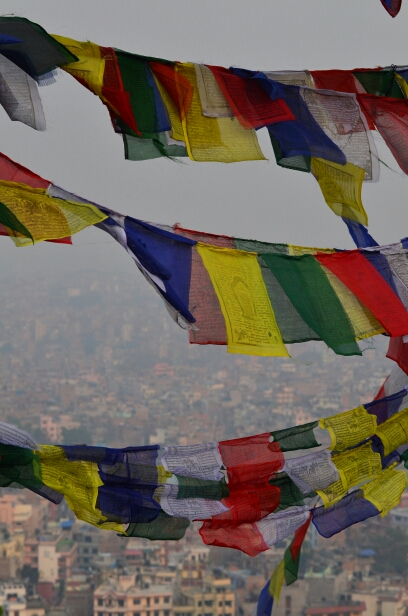 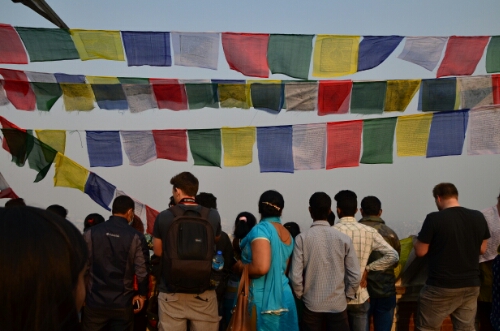 After a quick stop back at the hotel, we took a taxi to the Lama house. This all came about because I taught a lovely Nepali boy called Sakaar when he first arrived in England – in about 2011 I think. His little sister is now in the class next door so, when I saw their mum waiting for her parents’ evening appointment a couple of weeks ago, I mentioned our travel plans. She kindly offered to contact their family who would be happy to have us round for dinner. So, invitation number one was to visit Sakaar’s grandmother, Kamala, where we also met her nieces Anu (who had arranged everything with us), Krishpi and Nita.

We were warmly welcomed and given khatas (scarves used in many celebrations including to welcome someone). My googling suggests that a white khata represents water and peace. Each of us was also given a purse/wallet. Coffee appeared and they had bought bottles of Coca Cola especially. Kamala soon dispatched Nita to buy whisky for us too! A selection of snacks were laid out: grapes, apple, fried eggs and savoury things I don’t know the name of. Unsure of Nepali etiquette, and thinking this was to be our evening meal, we did our best to eat it all. A little later she produced a veritable feast: actual dinner! While they watched, and photographed, we tried to eat as much as possible but eventually, despite its deliciousness, had to admit defeat!

My favourite part of the evening was, after an innocent compliment regarding Kamala’s purple sari, being given a Nepali makeover. She foraged in her wardrobe for suitable components, Nita embarked upon the complicated process of wrapping the sari around me and Krishpi finished the look with a bindi spot and a hair clip! 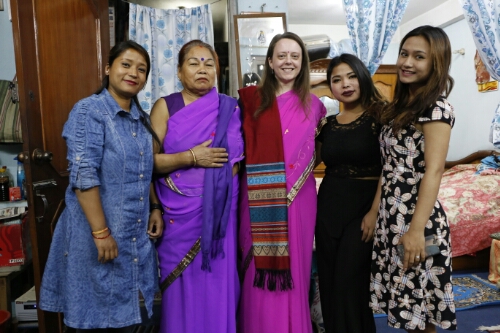 For the rest of the time, we chatted, Anu acting as an excellent translator, learnt a few Nepali words and bonded over nature programmes and Kamala’s favourite Indian soap opera!

It was such a special experience and one we’ll definitely never forget. They were a perfect example of how friendly, welcoming and hospitable we have found Nepalese people to be and it was such a privilege to spend time with them.

Next time, I’ll tour you around a few other locations in the Kathmandu valley and tell you a little about welcoming in the new year 2074!

3 thoughts on “Nepal: Namaste from Kathmandu”