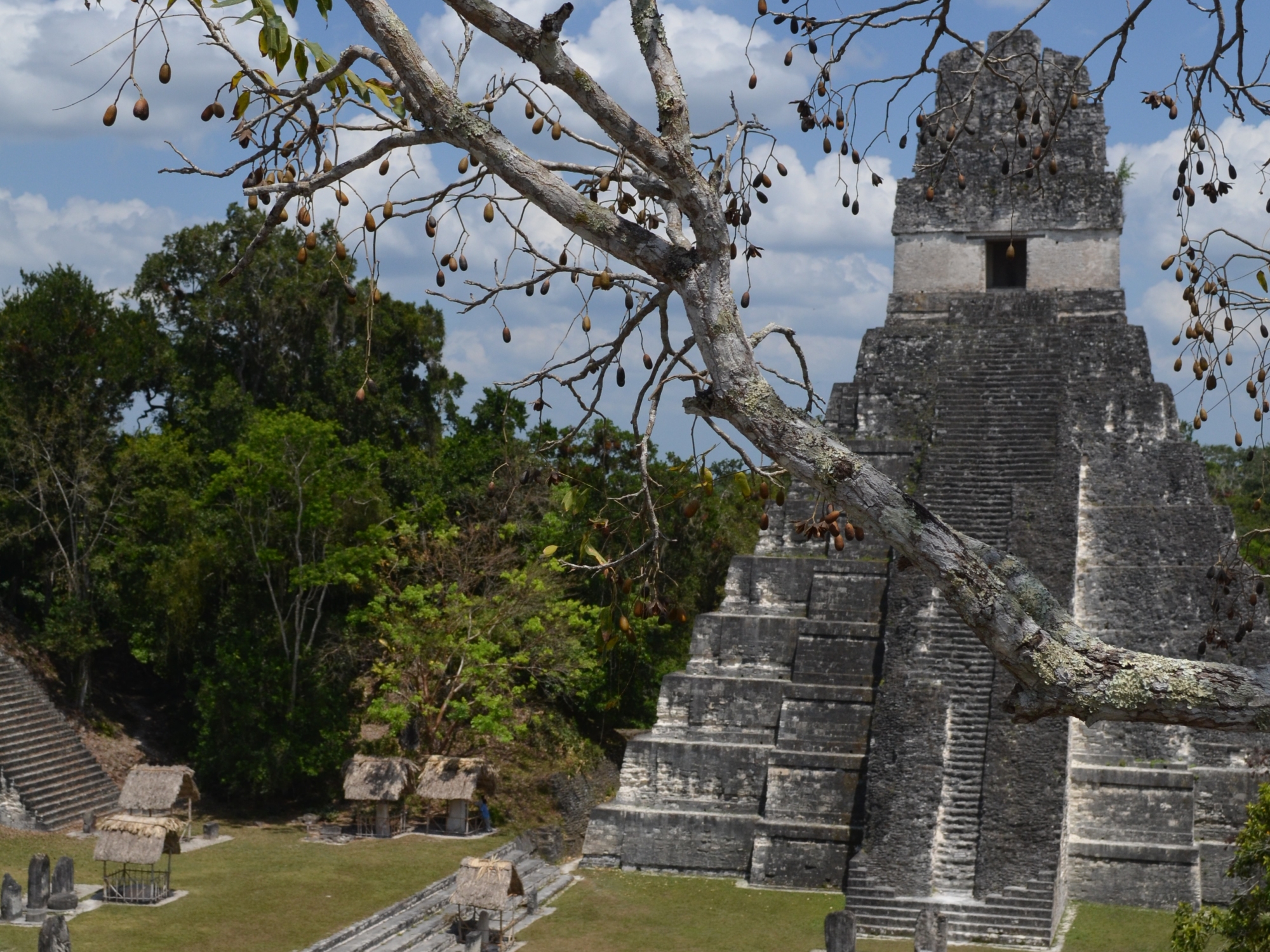 The Guatemalan stint of our adventure began in the old town area of a city named Flores. It sits on Lake Peten Itza and is joined to the rest of the city via a short causeway. The one-way roads are cobbled and lined with colourful houses and shop fronts. Little red and white tuktuks pootle about industriously.

It is tiny enough that you can walk everywhere in an hour or two but our reason for going there was that it’s a convenient base for visiting Guatemala’s most famous ruins, Tikal. This was a wedding gift from Phil, Teresa and Archie (the littlest Webster): thank you very much!

I’ve spent two recent posts writing about ruins so I’ll keep it brief this time. Tikal was the largest Mayan city in the ‘classic era’ but, after its abandonment, it became enveloped by the jungle. The tops of some ruins can be seen peeking out above the canopy. The structures differ from others we’ve seen in that their sides are incredibly steep and that it feels like there’s a lot more jungle than stone. 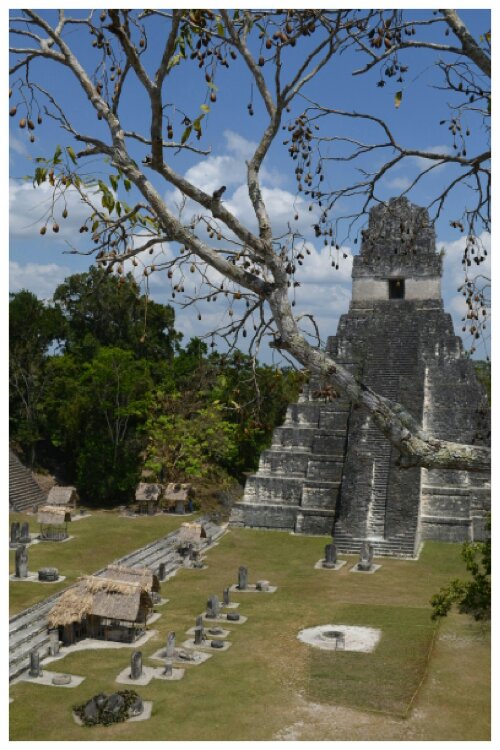 It was interesting to see partially excavated areas: it’s amazing how much in the way of soil, plants and trees grows on top of a building untouched for 1000 years! 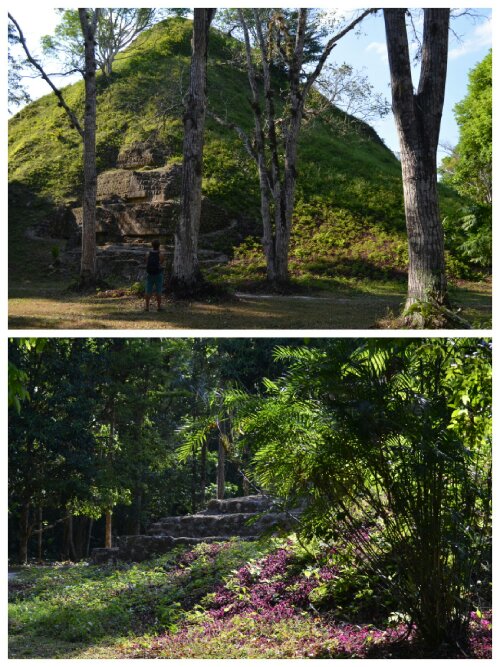 However, unexpectedly, the ruins were not the most exciting part of the trip. Instead it was the wonderful abundance of wildlife in the jungle! There were a few things I didn’t get pictures of: coatis (a bit like raccoons), ocellated turkeys (almost peacock-colourfulness), a squirrel and lots of lizards.

Birdsong filled the air so we spent a fair amount of time staring up at trees, trying to locate the culprits. Here are some I managed to sniper – not brilliant given how far away they were and the difficult light.  The top left is a woodpecker and the bottom left is a toucan.

I think these two might have been having an argument!

But the absolute highlight were the primates. It was an unusual combination of them being low enough in sparse enough trees for a good view, numerous, not particularly scared of the humans below yet also not in the habit of interacting with them or depending on them for food. We were really lucky to spot several groups despite it really being monkey nap time. There were two kinds, black howler monkeys and spider monkeys. We were trying to remember if we’ve seen howler monkeys before; we know we’ve definitely traipsed through jungles tracking their distinctive calls though. 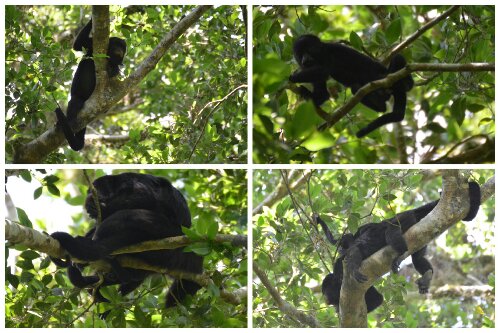 We’ve certainly not seen spider monkeys before. They are strange to watch because they’re so gangly and they sort of appear to walk through the trees rather than swing. Far outnumbering the others, it was hardly surprising that when the spider monkeys invaded a group of dozing howlers, they successfully ousted them! As you can probably tell, it’s hard to stop taking pictures of monkeys!

And I saw a fox. A bit more wild than those that scamper around Derby at night!

So, from Flores, we travelled to Rio Dulce (sweet river) which is a village situated on Lake Izabel. Our lakeside jungly accommodation was reachable only by boat and had no solid walls, only mosquito net mesh. It was also home to several bats, though thankfully not actually inside our room! I’m not a fan. It was a nice way to be in the jungle but not in the jungle!

After a day there, reading and relaxing, we took a tourist boat ride, over the lake and through the beautiful Rio Dulce canyon. It stopped at a few points to allow us to take closer looks at Castillo de San Felipe and the river’s bird life.  (Top left picture is actually from a wander on land.) 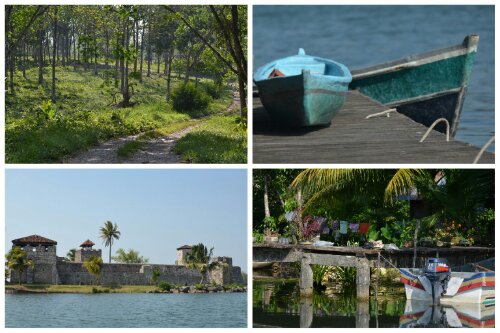 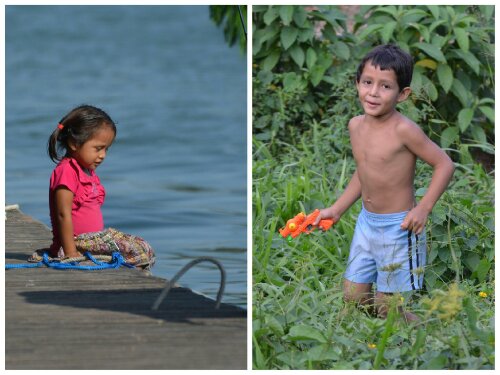 Our destination was Livingston, a vibrant mainland town unconnected by road to anywhere else. It is notable for its unusual and interesting mix of Garífuna, Afro-Caribbean, Maya and Ladino people and cultures. With this view, we opted for another chill out day instead of over-exerting in the immense heat!

And now we’re in the lovely city of Antigua which I’ll leave for next time. Tomorrow we’re heading up a volcano!

One thought on “Guatemala: All things arboreal… and a fox”