Returning to Thailand felt a bit like being reunited with an old friend: there is a comfortable familiarity where nothing takes you by surprise yet it’s still a welcome and refreshing intermission from regular life. Because of this, we didn’t experience as much of a desire to leave the comfort of our hotel to explore as we would somewhere new. Our lovely hotel was set away from the more touristy areas of Kata and Karon (Phuket) beaches but we took a few strolls all the same, becoming reacquainted with the good, the bad and the ugly.

Beautiful fuengfa (bougainvillea) in clusters of pink, red, purple, white and orange cascade implausibly from the same bushes; the white and yellow flowers of frangipani trees line local gardens; and garlands of jasmine and marigolds are strung from rear-view mirrors and shrines. Open-fronted roadside restaurants, 7elevens and local shops selling bottles of green gasoline alternate with signs offering massages, laundry services and taxis. As you walk, the buzz overhead draws your eye to the dangerous-looking muddle of power cables whilst the unmistakable sewer stench brings your attention back to your feet, sometimes just as a cockroach scuttles in or out! Flags and portraits of the royals remind you how patriotic the country is.

Essentially it’s been an uncharacteristically and intentionally un-backpacker-y pool and beach relaxation holiday, staying in more luxury than we ever did on our world tour!

The comfy sea-view room is air-conditioned and balconied; the breakfast is international, plentiful and varied; the restaurant serves posh versions of all our favourite Thai dishes for about £4 each; and the staff smile and wai and ensure the atmosphere remains serene. 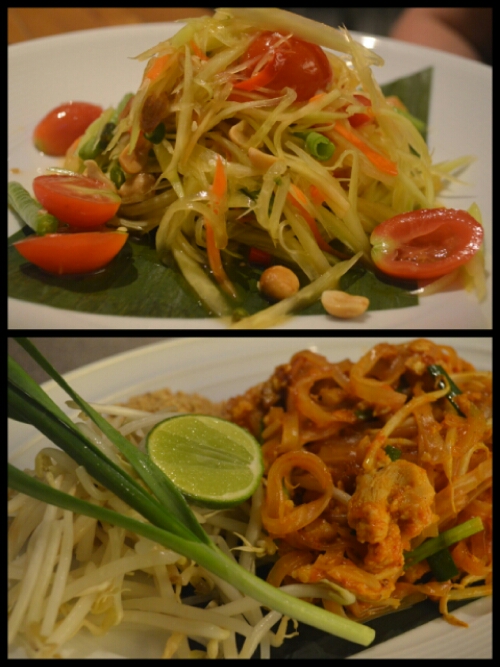 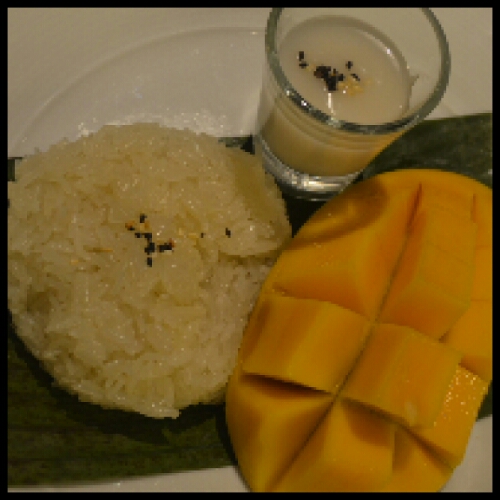 We’ve enjoyed a few sunsets and have strolled on a couple of beaches but the majority of our time has been spent reading on sunloungers. Bliss!

This sunset was from our balcony: 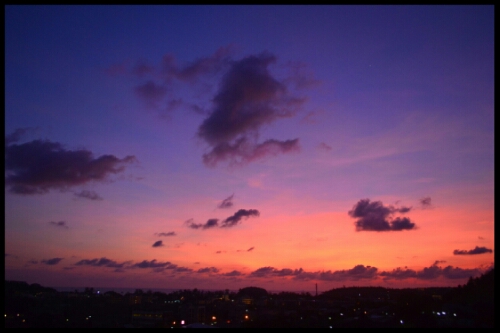 Here we are on small Kata beach: 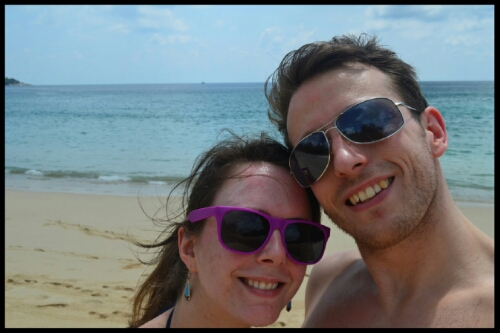 An evening stroll to big Kata beach was much busier. The parascenders are one paying tourist wearing a life jacket and strapped in, and one acrobatic lunatic just holding on to a couple of straps! The inconveniently beached boat is from the Scilly Isles, bought by some Australians in Ranong, sailed to Phuket, anchored at sea and swept in by a small storm. The Australians have now sold it and left; salvage attempts continue! 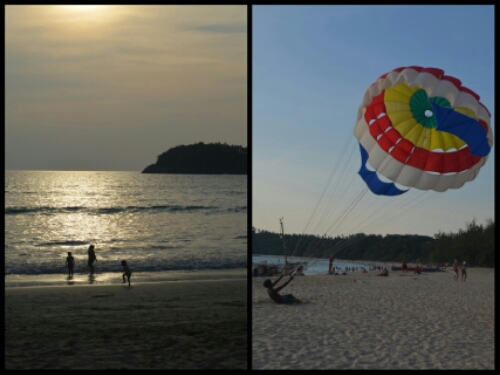 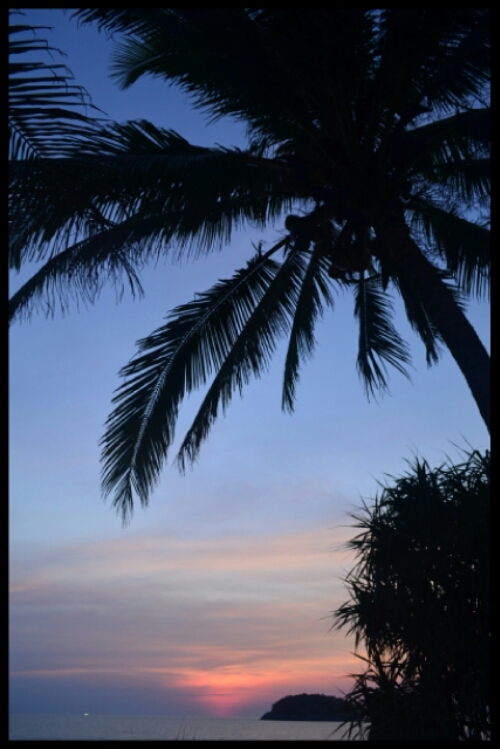 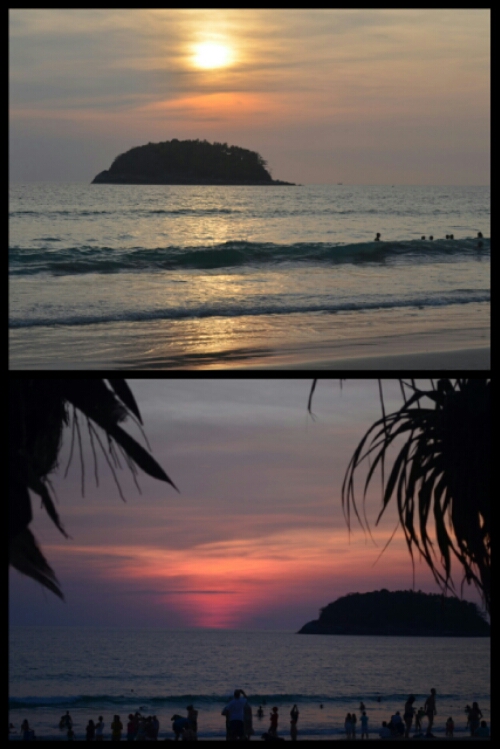 The only exception to our general slothfulness was a diving day trip. We took three dives with a company called Sea Fun Divers, a boat ride out to the east. I was interested to see whether I’d remember how to do it as it’s been a year but fortunately we had a very understanding dive master, Sophii, who was happy to talk through the procedures and was also attentive during the dives. As it happened, it all came back to me just fine. The only unavoidable problem was the full moon: it meant that there was more of a current and, consequently, reduced visibility.

The dive boat was the best I’ve experienced: good quality equipment including dive computers for everyone; shaded seating areas; decent toilets; unlimited hot and cold drinks; and boatboys who kept us supplied with fresh pineapple and water melon and a delicious hot lunch. All three dives were too deep for our camera (which is fortunate since it’s currently travelling the world with my brother) so I’m afraid there are no pictures. I have, however, added links into these brief descriptions of the dive sites so you can easily view images of some of our more notable underwater companions. 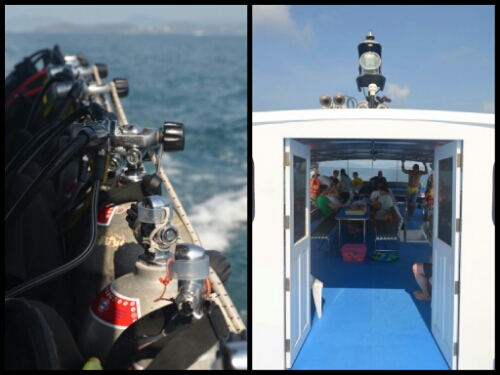 First was Koh Dok Mai which is a small island that you can easily swim all the way round and which provides a great wall dive with creatures in every nook and cranny. We saw a load of different moray eels (fortunately one of the few animal hand signals I have retained!) darting home or poking their heads out; a banded boxer shrimp in a rock crevice; mappa and seal-faced pufferfish; trigger fish and some cool sea urchins with what looked like five glowing blue spheres at their centre. The dive’s highlight, though, was definitely swimming into a cave! I thought it might feel claustrophobic but it was fine, full of shoals of fish and, unfortunately, lots of sand kicked up by the previous visitors. A first for us both anyway! 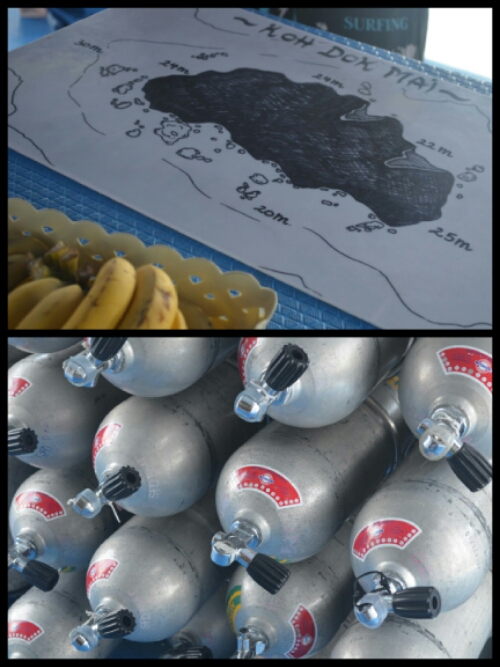 Site two was my favourite: King Cruiser (aka Thai-tanic!). It is the wreck of an 85m car ferry which sunk in 1997.

Boris – the guy in charge of our boat, considered to be the ‘real deal’ as he was there at the time – filled us in on the details. In the 1960s it operated in Japan until it was considered too old to be safe and so was sold as a floating wreck to Thailand to act as a passenger ferry plying the route from Phuket to Phi Phi. Stories surrounding the sinking, bribes and fraud abound but Boris said the experienced captain – for whatever reason – sailed the opposite way around a rock pinnacle to normal, crashed creating a giant hole in the hull and in two and a half hours the boat had sunk to the sea floor on its side.

All 561 passengers were rescued and the captain went on to become an admiral in the Thai navy! Boris and some friends phoned the authorities, offering to dive down and start clearing out luggage and loose items and so were first on the scene. Apparently, after three days, the ship started to move and eventually fell back the right way up, creating a huge movement in the water. One of Boris’ friends was busy trying to unscrew the compass and would have been swept (life threateningly) back up to the surface had he not been weighted down by it! A good story regardless of whether or not it’s true!

Anyway, now the disintegrated wreck has been taken over by lovely white and lilac corals and is home to all manner of sea life. Some of the structure has collapsed over the years but you can still swim through the car deck, entering via a set of toilets! There were also lots of small reef fish, parrotfish, poisonous lionfish, schools of juvenile barracudas and a group of moorish idols.

After lunch on board the boat, we did our third dive at Shark Point, a series of about six pinnacles. Sadly our trip, around the two largest pinnacles, didn’t quite go according to plan due to a lost diver and a strong current, so we didn’t see the sharks (leopard and bamboo). We did, however, see lots of sea cucumbers, blue starfish, trigger fish, a stingray, large fan corals, loads of clown fish (Nemos!) usually weaving in and out of the tentacles of magnificent anemones, barrel sponges, porcupine fish (thankfully in their non-spiky states), crown of thorns starfish and a big school of full-grown barracudas.

Although we didn’t see any major new creatures, I still scuba’d my way around feeling privileged to be able, once again, to be a part of their magical underwater world. I definitely have the scuba bug!

That’s it for our time in Thailand. Next stop: Harry and Ting get hitched in Singapore! Woohoo! Can’t wait!