Having spent five busy days in Rio, I found I had rather too much to write about so that’s why you get two posts for the price of one! We are going to São Paulo tomorrow but only for a day so this may well be my last destination post! Although not quite my actual final post!

Helicopters had been patrolling overhead since Saturday morning but their presence seemed to increase on Sunday, football final day. There was a heavy police presence on the street too, poised to deal (with what seemed like disproportionate force) with protesters in Tijaca’s main square in the afternoon.

We decided it would be a good day to visit Rio’s beautiful beaches. Taking the metro a little further beyond where the bulk of the football fans were heading, the four of us – Jonathan, Becky, Dean and I – disembarked near to Ipanema beach. It was absolutely packed with seasoned sun-seekers despite the breeze in the air.

We ambled along, taking photographs, enjoying our surroundings as the red rescue helicopter, several waiting military helicopters and an ominous grey military ship circled us.

The little boy on the left had just half fallen over kicking a football high in the air and the one on the right was pretending to magic the sea in and out!

After clambering over some rocks, we returned inland a little way and reemerged alongside Copacabana beach.

Keeping to the pavement, we were swept along with the excited football fans in the direction of the FIFA Fan Fest big screens. En route we passed the ITV pundits readying themselves for their final broadcast.

Before Dean and I braved the beach to find a place to stand, we said goodbye to Jonathan and Becky who wisely didn’t fancy watching another match. As you can no doubt imagine, it was incredibly busy so we opted to stay at the tertiary screen on the basis that there would be even less room if we ventured any further. 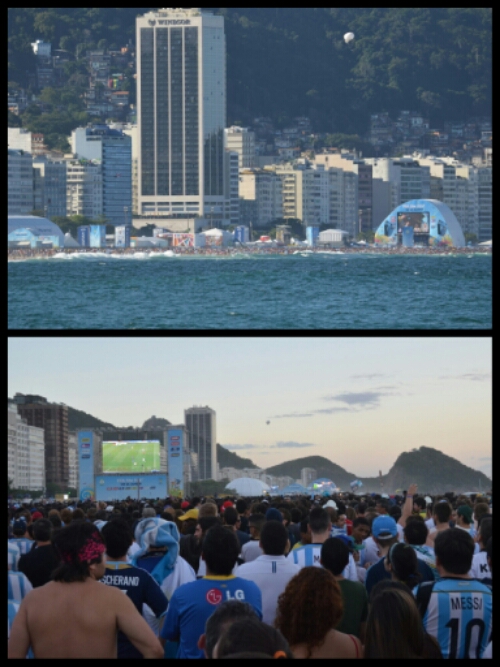 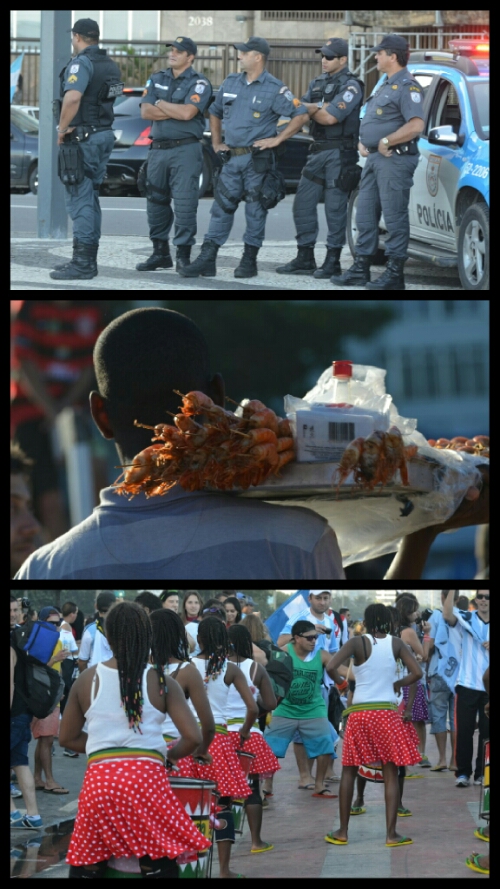 There were substantially more Argentina fans than Germans so there was some chanting and cheering at times but often it was bizarrely quiet as there was no commentary. It’s nice to be able to say I was there but I could barely see anything (not that I’d really have known what was going if I could!). I used the time to take a few photographs of nearby supporters. 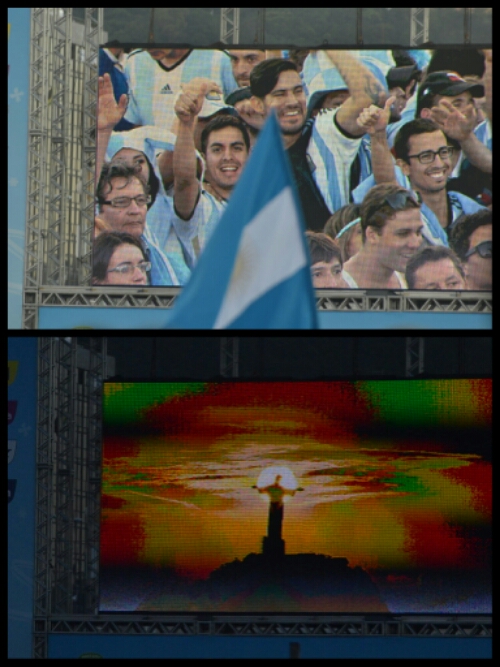 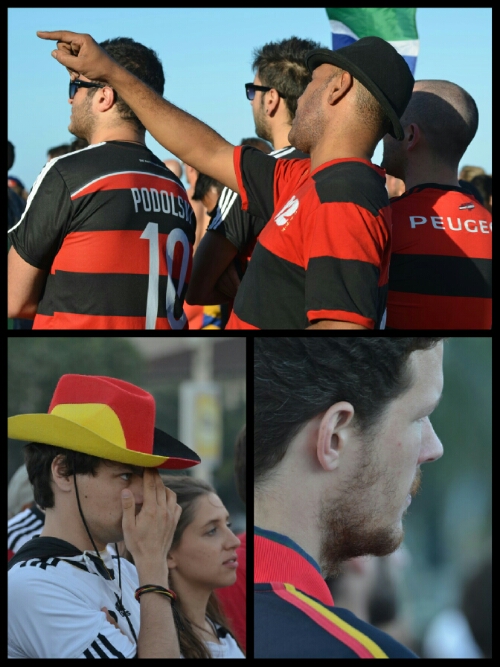 It was quite cool when the drone camera hovered over our area although I don’t think Dean and I quite made it onto the screen. 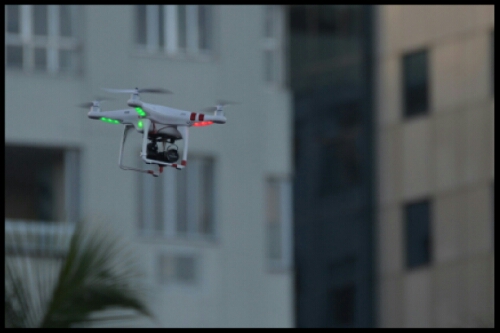 We left at the end of the 90 minutes – in order to beat the crowds we headed for the metro – but once we got to the station, securing our advantage, we stopped to watch the extra time in a station snack bar. I say ‘we’ but I’d really had my fill of trying to pay attention so I stood and read my book!

Back home we cooked a lasagne to thank the Nunns for their hospitality which was pretty tasty! We also filled out the final scores in our match prediction spreadsheet. I narrowly won with 169 points to Dean’s 164. Now I regret we didn’t decide there’d be a prize!

With the weekend done, we were back to exploring on our own. We’d dedicated the day to that unmissable, iconic tourist activity of the city, the Christ the Reedemer monument. Our tickets were a gift from Jo, Stephen and Emma Gotheridge, some of my blog’s most dedicated readers: thank you! It’s a good job we’d not planned anything else because nothing prepared us for the amount of time it took due to the enormous number of other people who thought it’d be a good day to go! I’ll abbreviate: bus 1 hour, queue 30 mins, minibus 15 mins, queue 1 hour, queue 2 hours 45 mins, minibus 5 mins, time at the statue 45 mins, queue 30 mins, bus 5 mins, queue 5 mins, bus 15 mins, no queue(!), bus 1 hour! Here was a momentary blue-skied sneak preview during the queuing. 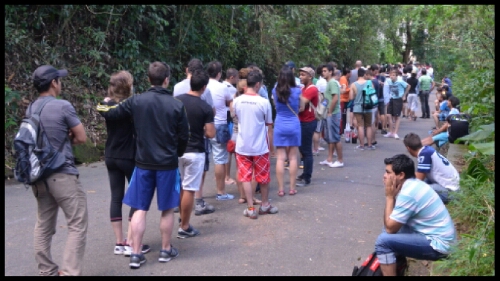 Despite this ordeal, and the fact it was basically dark when we reached the top, I am definitely very glad we stuck it out. Far away on its hillside, visible from numerous areas of the city, the statue looks pretty small but when you’re standing at its feet, looking up, it seems enormous! 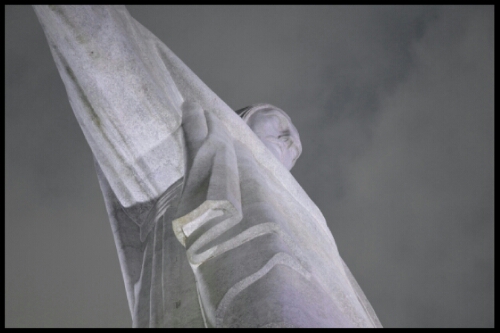 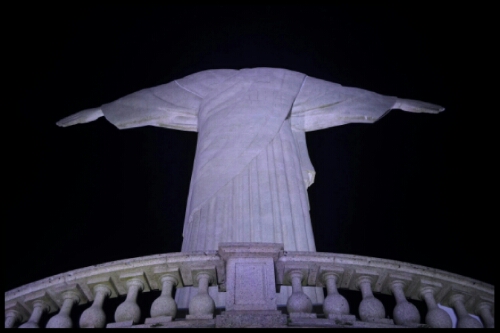 Powerful white lights bathed the statue in a heavenly glow and cast two silhouettes onto the night sky which were amazing. 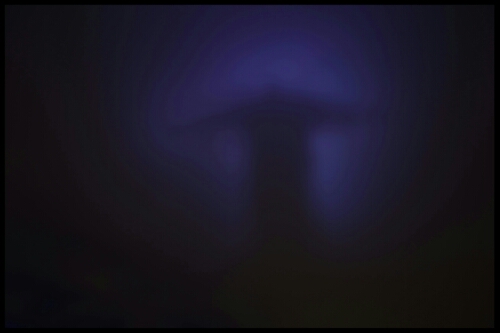 Our marvelling was by no means unhindered due to the hundreds of other people packed tightly together on the viewing area, many lying on the floor to photograph their companions with arms spread wide mirroring Christ. Inevitably many visitors were Argentine football fans and they deemed it a good time and place to gather and rowdily deliver football chants and songs, defiantly patriotic in the wake of their defeat. Imagine my delight!

Technically, below is the evidence that we were there but it didn’t come out very well! 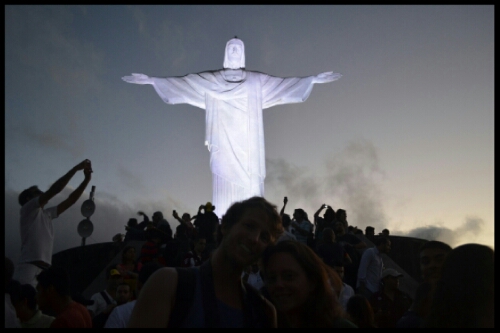 Our disappointment about not making it to the top in daylight was very quickly replaced by our admiration for the panoramic night time view: thousands upon thousands of points of light mapping out the city far below. Spectacular! 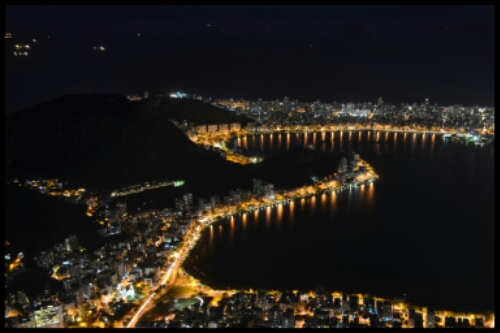 For our final day in Rio, we opted for what we hoped would be a less busy activity: a tour of Santa/Dona Marta favela, situated on the very steep Dona Marta hill. We have Phil Gardner and Destiny Mahoney’s gift to thank for enabling this excursion. Our tour of Dharavi slum in Mumbai was one of the most memorable parts of our trip to India so we were keen to visit Rio’s version. In reality it wasn’t really comparable in terms of the poverty we saw in India, but then the cost of living is far higher in Brazil so perhaps it renders residents in a similar relative financial position.

The tour itself wasn’t very informative, but it provided us a safe way to explore the favela (even taking photographs) which I wouldn’t have felt comfortable doing unguided. Nevertheless, Dona Marta is considered one of the safest favelas to visit as it was the first (in 2008) to be occupied by a Pacifying Police Unit whose aim was to eradicate drug trafficking. If it’s the sort of thing that interests you, there’s more info here.

Since there are no roads, another key factor in the favela’s progress was the construction of a kind of cable car/ascensor making it a less isolated, more accessible community. This is how we ascended, admiring the view of Christ the Redeemer as we did so. 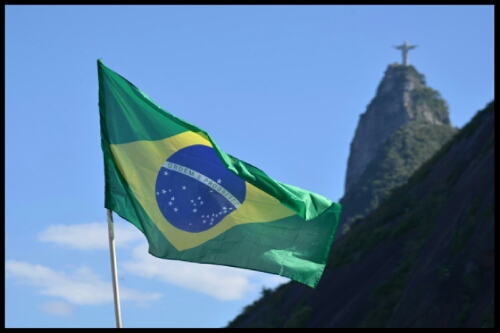 In the distance were more favelas, a huge cemetery and the bay with its high rise apartment blocks. 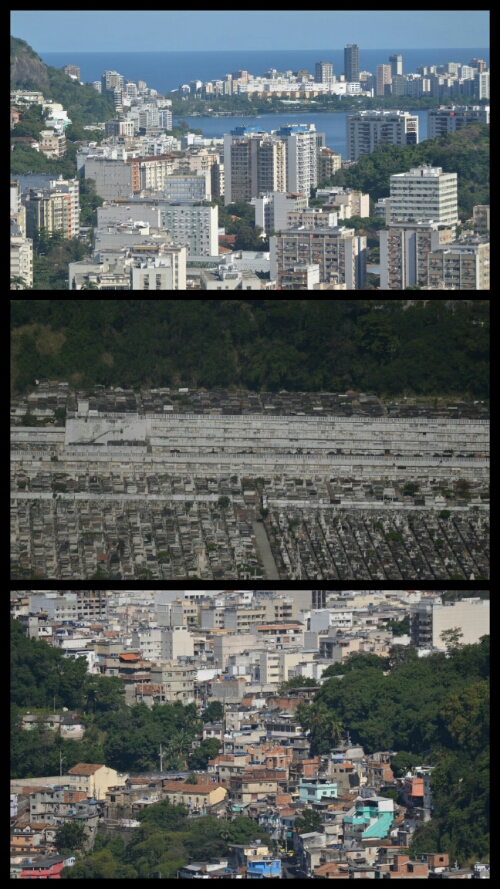 Then we meandered down through winding passageways which occasionally opened briefly into tiny communal squares; we passed the painted walls of haphazardly built houses that have been repaired, improved and amended wherever possible; and we ducked beneath washing, bunting and flags blowing in the breeze. 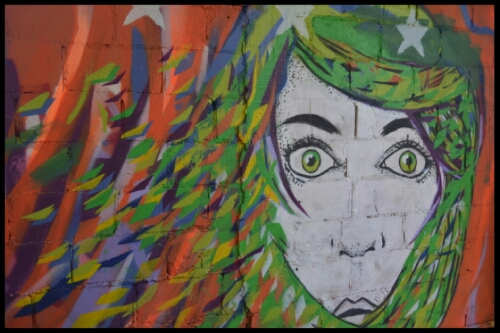 The residents are, I’m sure, very accustomed to the constant trickle of gringos coming to gawp at their homes. Consequently we were pretty much ignored as they went about their daily lives – shoppers returning home, kids playing together and youths sitting on walls, territorially.

Probably the favela’s most controversial visitor was Michael Jackson who recorded his music video for They Don’t Care About Us here and was heavily criticised for doing so. This sports pitch is where his helicopter landed and there’s a Michael Jackson square featuring images of him and plenty of related souvenirs. 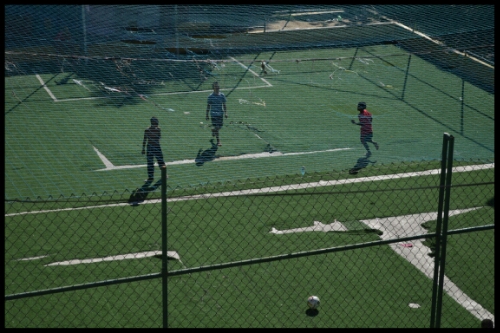 After this, we returned to collect our bags and to say goodbye to Jonathan and Becky then headed off to catch a bus to the quaint, colourful beach town of Paraty where the cobblestones are so unevenly sized, shaped and spaced that walking requires a huge amount of concentration! Here are a few photographs to end with including an unusual ice cream experience – a gift from Suzannah and Lee Hemmings 🙂 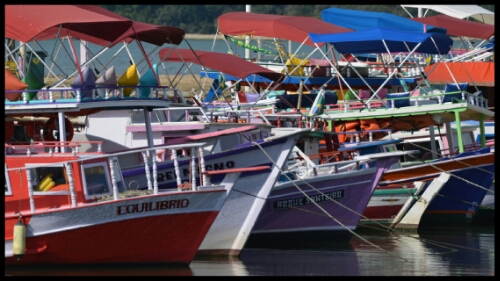 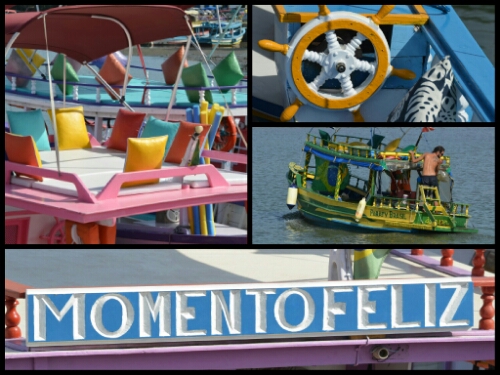 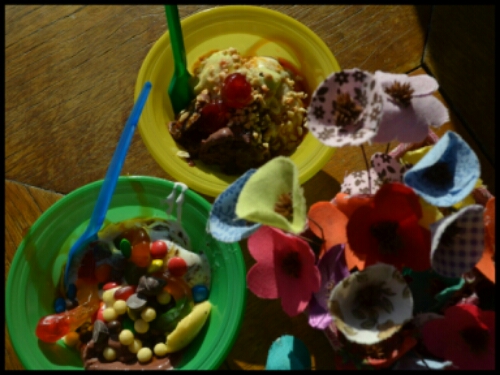 4 thoughts on “Brazil: Rio part 2: football, a favela and Christ the Redeemer”