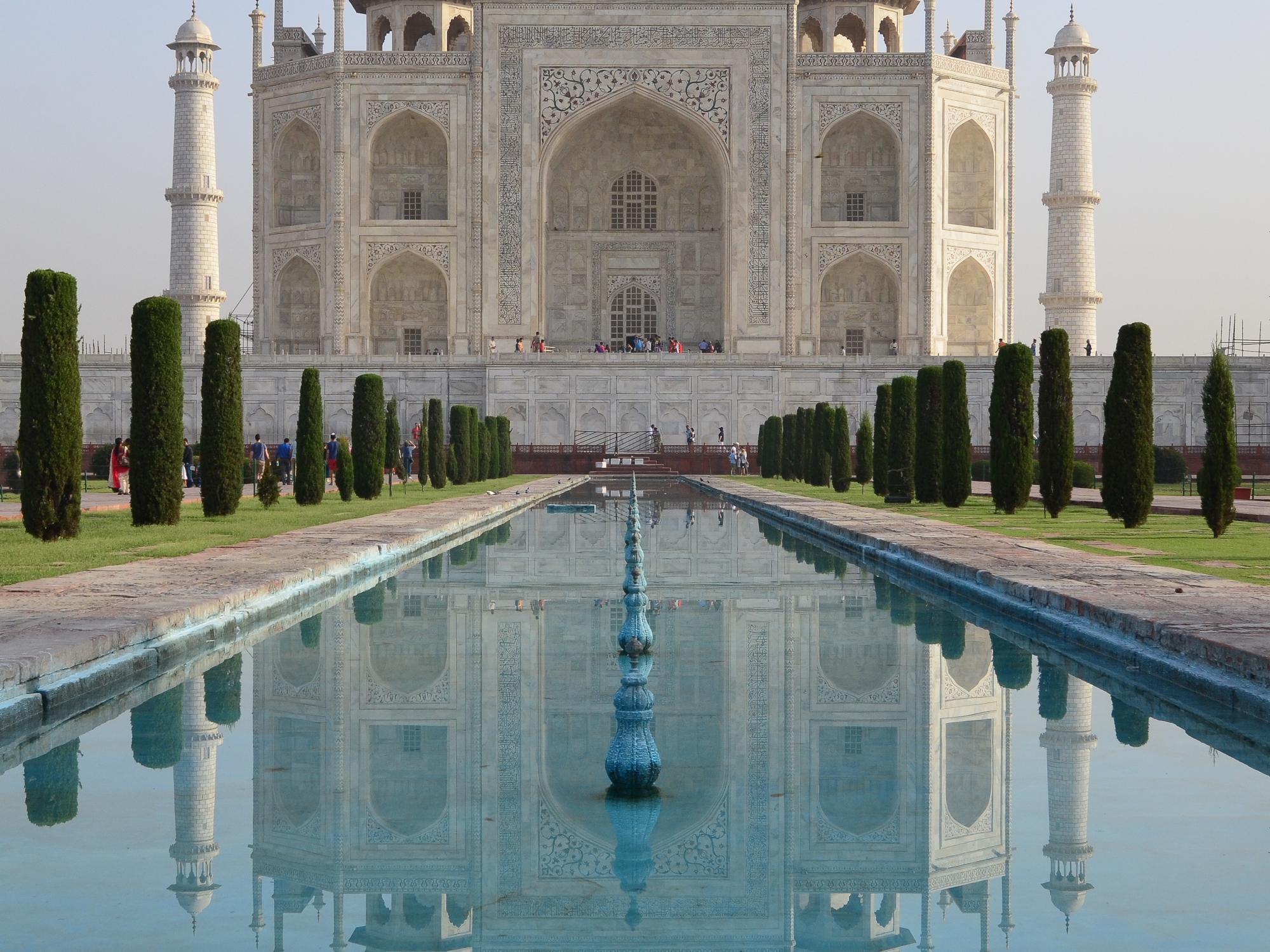 Grey skies and rain? It must be Bank Holiday Monday! It’s been raining more or less all day. Usually this would be a bad thing but actually it has made the mountain of school work a little more bearable. Now, to compensate, I’m indulging in a little mind-wandering, back more than a month ago to the third part of our Nepali-Indian adventure.

The heat in Uttar Pradesh and Rajasthan was over-whelming. It was a dry heat in the mid-forties, dipping only to the low-thirties at night. To give you an idea of what this felt like, travelling around in a tuktuk – thinking the breeze would cool us down – actually resulted in an experience comparable with the uncomfortable blasts of air that make you flinch as you open the oven door. Except constant! 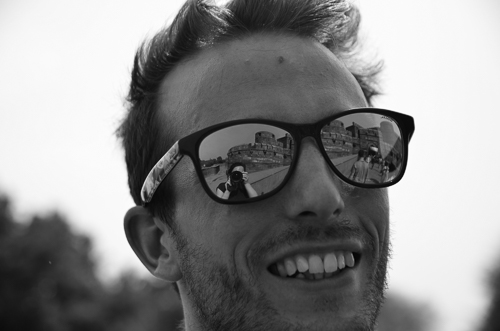 After spending time by the River Ganges in Varanasi, we headed to Agra, the first stop of the traditional tourist route ‘Golden Triangle’ which also takes in Jaipur and New Delhi. I was going to combine these three locations into one post but, as usual, I can’t whittle the photos down sufficiently so I think there will be two!

Arriving at Agra train station, we were met with a phenomenon which we’ve not really experienced before: an auto-rickshaw driver with a guest comments book! We obediently read it and listened to his sales patter.

Ali was a likeable, grandfatherly character with his grinning mouthful of higgledy-piggledy teeth and the usual combination of a strong Indian accent peppered with English idioms. Feeling rather lazy after a very short night’s sleep and a 5am train from Delhi, we decided to take advantage of his services. I won’t mention all the places he took us but here are my highlights.

Known fondly as ‘Baby Taj’, the domeless Mughal tomb of Mirza Ghiyas Beg and his wife – constructed in the 1620s – was the first building in the city to be covered entirely in marble. 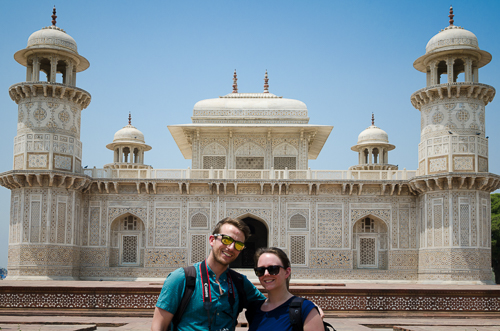 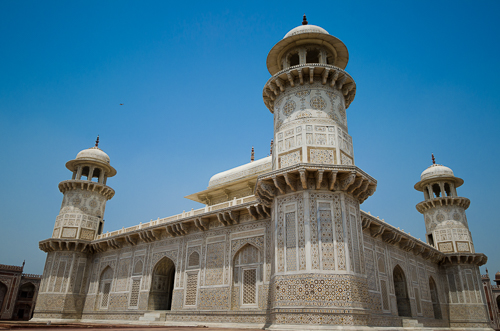 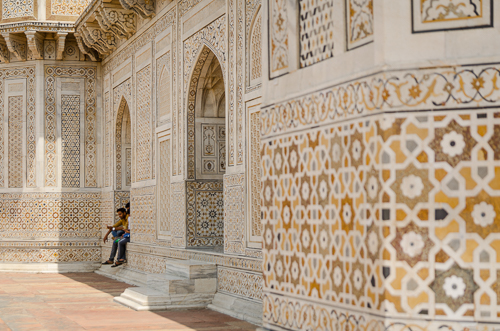 Officially, it’s not as ‘successfully proportioned’ as the Taj Mahal but I thought it was still a really beautiful place with its intricate semi-precious stone inlays of yellow, grey, orange and brown. In some places they make geometric patterns whilst in others (particularly inside) they form cypress trees, wine bottles and vases of flowers. 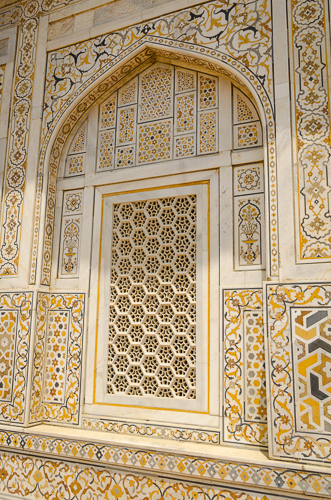 Inside the mausoleum, there’s a central square room containing the two cenotaphs and around the edge are four rectangular and four square rooms (containing other family tombs) connected by doorways and amazing, carved marble jali screens. 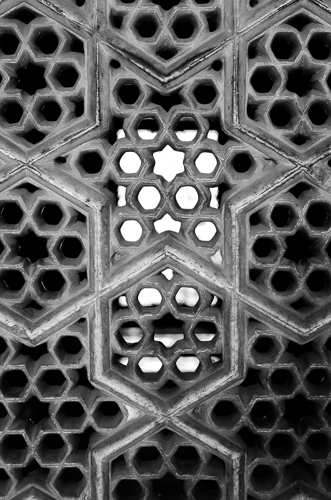 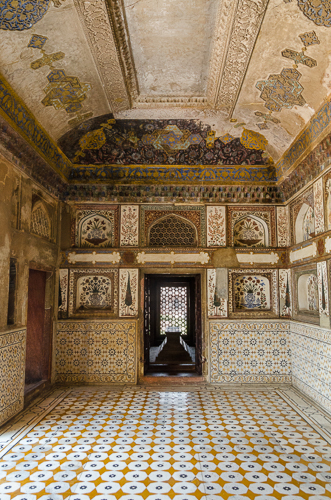 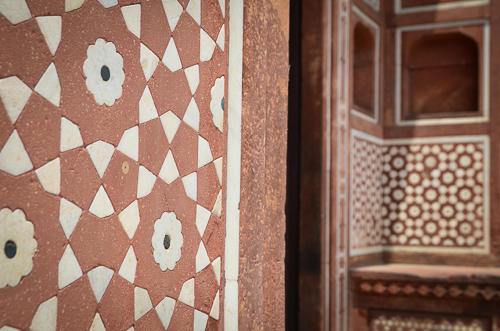 This garden complex seemed like a bit of a hidden gem as it was all but deserted. We stopped only briefly, for our first glimpse of the Taj Mahal – a wonderfully unobscured view from over the Yamuna River.

There were also these amazing, playful, little squirrel things which played dead when we went near! 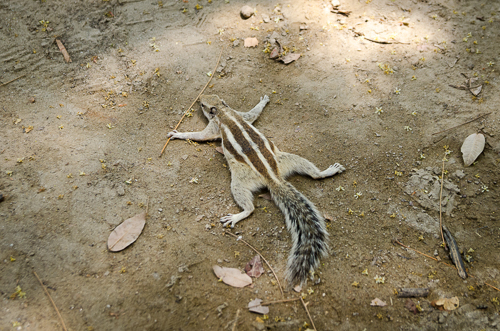 This red sandstone, half-moon shaped walled city has seen its fair share of emperors and battles throughout its complex history. With each new resident, parts were destroyed and others constructed. I can’t remember all the details. Now, though, the majority of the fort is used by the military, leaving only a small section open to the public.

Unlike the perfectly symmetrical, aesthetically-pleasing designs of the tombs and palaces we visited, the entrance we used to enter Agra Fort was via three gates, placed close together and at right angles in an attempt to disorientate attackers and to make charging at the gate impossible. Another entrance was once guarded by two huge stone elephants. Two moats defended the fort – one watery one filled with crocodiles and one filled with trees and dangerous wild animals. High walls surrounded a furrowed (for easier grip for animals I think) ramp, leading up to the inner gates and courtyards.

The tall, carved gates were once inlaid with semi-precious stones. Some small areas remain or have been restored. 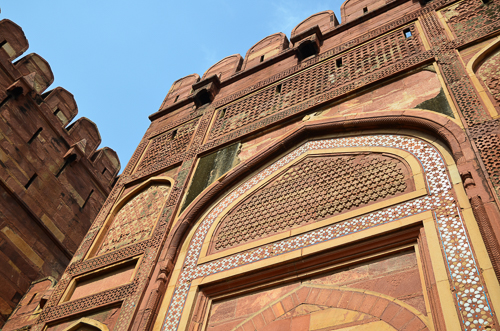 This impressive façade, featuring Islamic, Hindu and Mughul motifs, is Jahangiri Mahal which was probably a harem. In front you can see a huge bowl with steps to its rim inside and out. It was once the emperor’s bath tub, filled with rose water, and would allegedly accompany him on his travels. Spot the bird (red kite) 2! 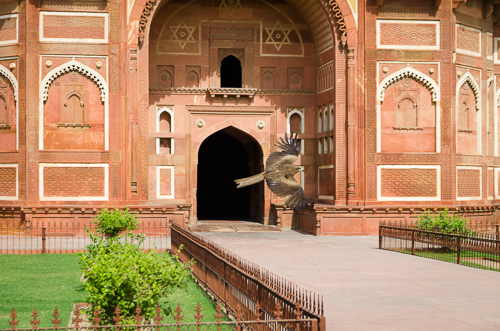 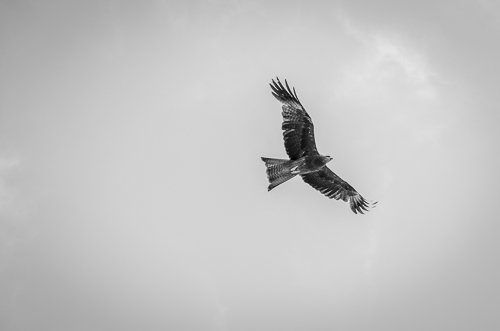 Inside the palace, the small windows on the balconies above this courtyard would have been for the concubines to watch entertainment from. Our guide said that in the centre, the different shaped windows represented the emperor Akbar’s three wives (with sizes demonstrating his order of preference): Islamic, Hindu and Christian.

We visited the royal rooms from where there are views over the River Yamuna of the Taj Mahal. 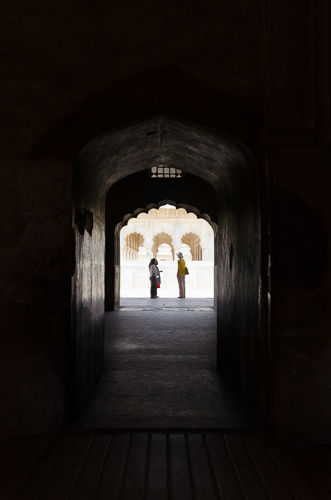 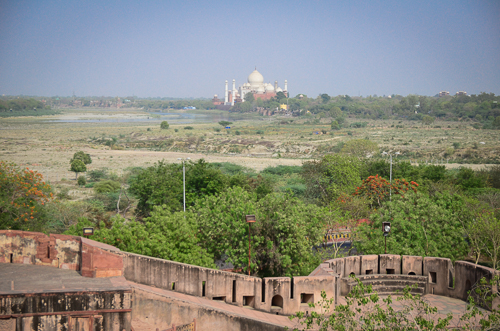 The central room, originally belonging to Shah Jahan (who was emperor from 1628-1658 and built the Taj Mahal) was flanked either side by smaller rooms for his daughters, Roshanara and Jahanara. Our tour guide said this was a form of compensation for them not being allowed to marry. Ornamental niches and beautiful carved inlays adorn every wall. 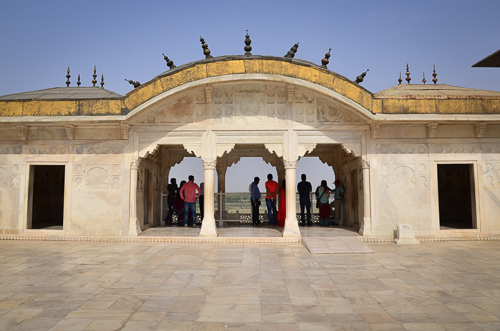 A little further on was the world’s most beautiful prison. After an illness, Shah Jahan was deemed unfit to rule by his third son, Aurangzeb (emperor 1658-1707), who had taken power from his brothers during the illness. (The harem system and the absence of laws of succession meant that rulers would regularly kill several family members in order to take power!) Consequently, Shah Jahan was placed under house arrest here for the rest of his days and was nursed by his daughter, Jahanara, able only to gaze across the river at the Taj Mahal where his favourite wife lay. He died in 1666; some say he had intended to build a black Taj Mahal for himself but instead his tomb is with his wife’s in the Taj Mahal. A tiny mosque – Mina Masjid – was also built for his use during his imprisonment. 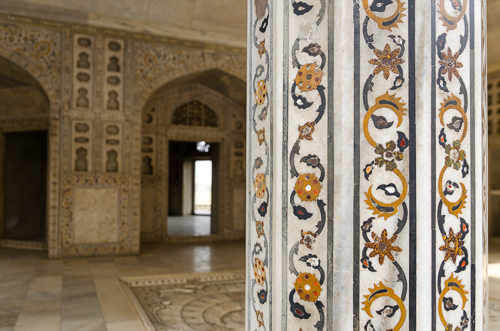 Below, Dean hasn’t been sent to stand in the corner, but we were trying out the whispering walls. I stood on the opposite side and could hear what he said. Dean says this is because of the arched ceilings although the guide said it was due to the gaps in the walls which originally had water pumped around them to cool the rooms in the hot summers.

Within the inner complex would have been grassy areas for walks and sports, pools for fishing, vineyards and flowerbeds.

Elsewhere were courtyards for elephant fights and, below, the Diwan-i-Khas where the emperor would have met kings, dignitaries and ambassadors. We were told that he would have sat on this large black stone plinth. If you look closely, you can see where it was grazed by a cannonball which then bounced up to smash a hole in the top left corner of the pavillion! Or so we were told!

Public audiences with the emperor were held here. You have to imagine it with rich fabrics and carpets.

We let Ali down at the end of the trip by resolutely not wishing to do a tour of various handicraft stores where he would receive lottery tickets in return for customers. We humoured him with a brief visit to this one place where they were making all kinds of products featuring carved inlays. Interesting but not for us!

On our second day in Agra, it was the day we’d been looking forward to: Taj Mahal day! We got up before the sunrise and took a short tuktuk ride to one of the entrance gates where we waited for a while, being bitten excessively (and for the only time in the trip) by mosquitos! Our early start was rewarded by us being some of the first into the complex. The building in the second picture is one of the gates. 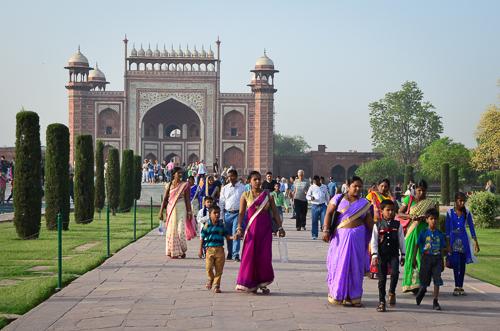 The warm golden glow that crept over the Taj as the sun rose was mesmerising and changed the mausoleum’s ambience moment by moment.

It was something we’d put on our bucket list on our way home from our honeymoon so it was amazing to finally be stood right there in front of it! Because of our familiarity with its form, even the scaffolding – ruining its complete perfection – didn’t seem to matter too much: I guess your eyes can edit it out. Similarly, the other tourists kind of just seem like barely-noticeable ants. In some ways it’s just a building but in others it somehow feels more than that. I don’t know if it’s its fame, its intricacy, its whiteness, its symmetry, or all of the above. But certainly it does somehow instil a feeling of awe beyond that which most other buildings would.

I won’t write too much about it. As I’ve already said, it was built by Shah Jahan, for his favourite wife, Mumtaz Mahal who died after giving birth to her 14th child in 1631. With so many wives and concubines at his disposal, the number of children borne by her is testament to his favouritism. Twenty thousand workers spent more than twenty years constructing this most beautiful of love letters. Marble and semi-precious stones were brought from Persia, China, Afghanistan, Russia, Tibet and the Indian Ocean. Inside (where you cannot photograph), perfectly central, is the cenotaph of Mumtaz Mahal. As the afterthought that it was, Shah Jahan’s cenotaph is placed nearby, ruining the otherwise flawless symmetry of the whole building!

I realise there are far too many photographs but, you know, it’s hard to choose! I make no apologies! Enjoy! 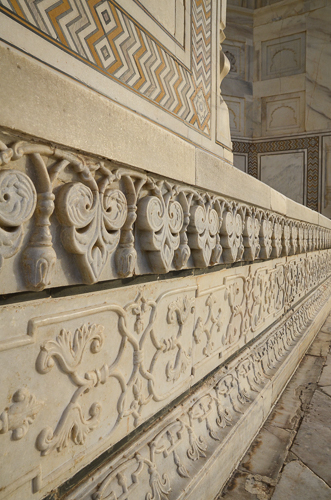 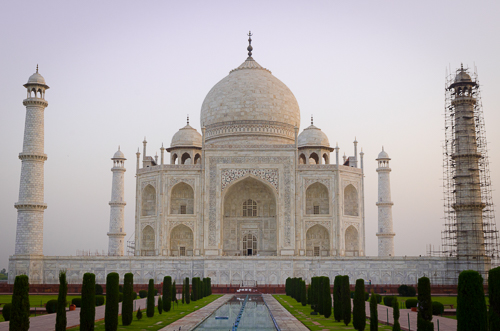 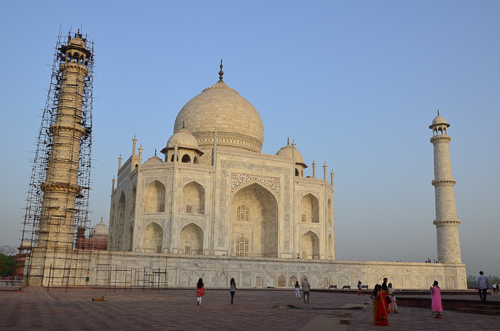 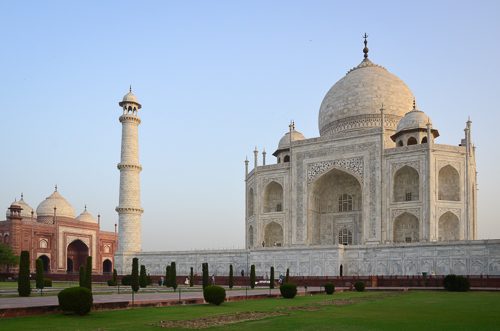 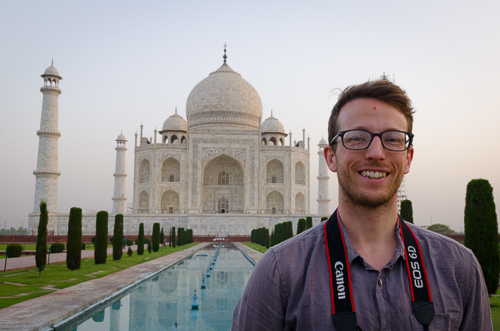