Our boat slowed as we entered the bay and drew closer to the island idyll of Nosy Mangabe, once inhabited by pirates! For one night only, it was to be all ours! In awe, we drank in the sight: almost every inch of the hilly land was covered in dense, vibrant, tropical rainforest save for a tempting sliver of beach in front of a small clearing in the trees. The boat docked and we leapt ashore, unloading our meagre possessions along with a tent, bedding, food and kitchen equipment. 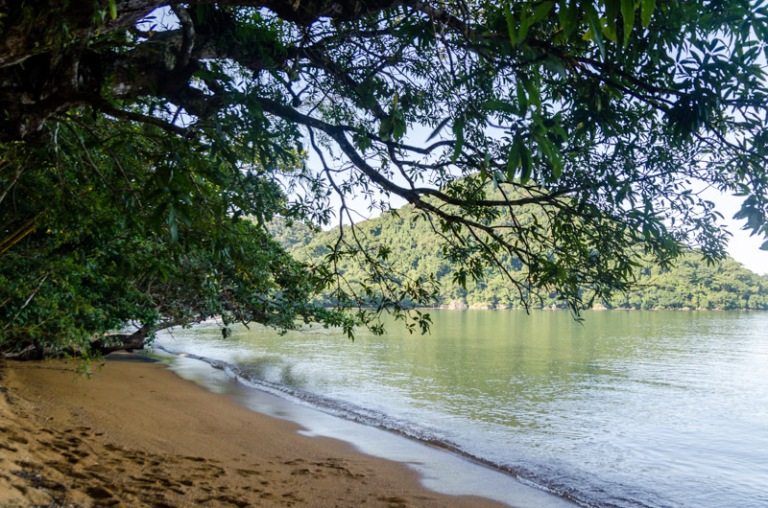 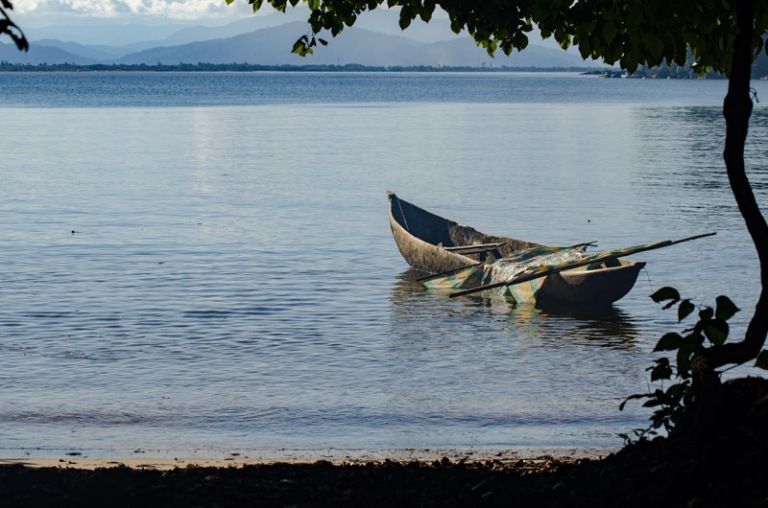 We were accompanied by our guide, Augustin, and a man from L’Hippocampe who had come to cook for us. A small camp had been erected just ahead, consisting of a sheltered wooden dining area and a more solid brick-built kitchen. A few hundred metres away from the centre of the camp, hidden in the forest, was a bathroom building which looked as though it hadn’t been used – or cleaned – for quite some time!

Along a narrow pathway, parallel to the beach, were empty wooden platforms ready for tents to be pitched on. Ours was later assembled for us on the furthest plot from camp, giving a wonderful sense of isolation and bringing the sea and, later, the stars to the forefront of our experience.

The white-fronted brown lemurs of the island have figured out that this area is an easy way to acquire food when humans come to stay so it’s important to keep your wits about you whilst you eat. They’re very brave and very cunning! We only lost one banana to them but, on the plus side, it did mean we could get fairly close to them too. The ones with white faces are the males. 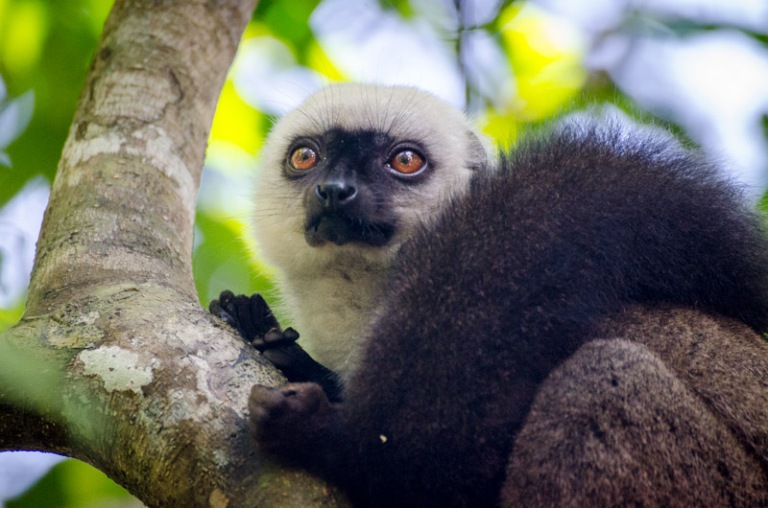 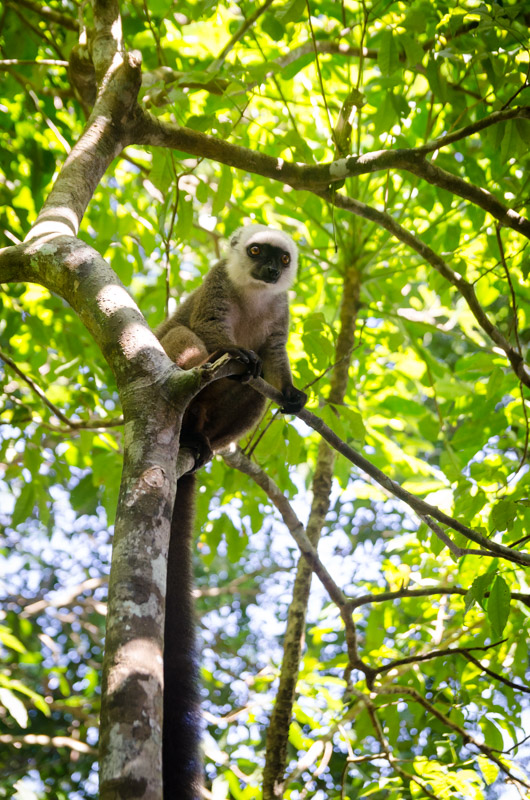 Whilst on the island, we made the most of its pristine, unspoilt beauty and spent as much of the day as possible trekking, returning only for meals and an afternoon dip in the sea to avoid using the ‘shower’ block. It was as hot and humid as you’d expect from a rainforest, and rather hilly, so we were drenched in sweat in no time at all. Again, Augustin did a fantastic job of seeking out camouflaged creatures and shy lemurs. Madagascar’s wildlife is phenomenally diverse and so much of it is endemic so we were keen to find (and tick off in our field guide – Wildlife of Madagascar (Behrens and Barnes 2016)) as many unique species as we could. I think many people visit mainly for the lemurs. We love lemurs, don’t get me wrong, but the amphibians, reptiles, birds and insects were just as much of a draw for us.

Here’s what I managed to snap during our day hikes starting with crickets, a butterfly, a hairy moth, a mantis and some weird fungus: 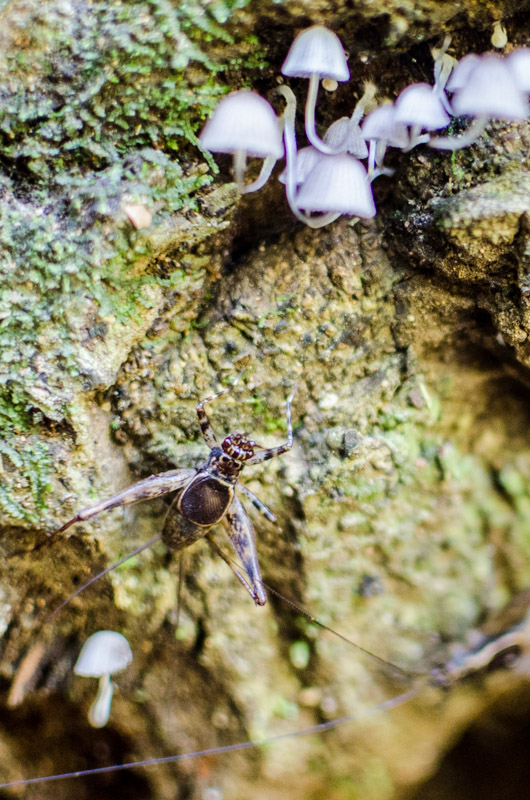 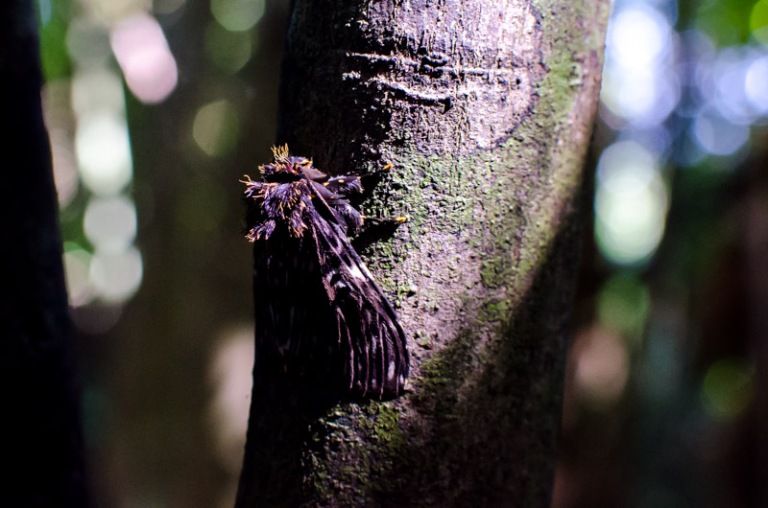 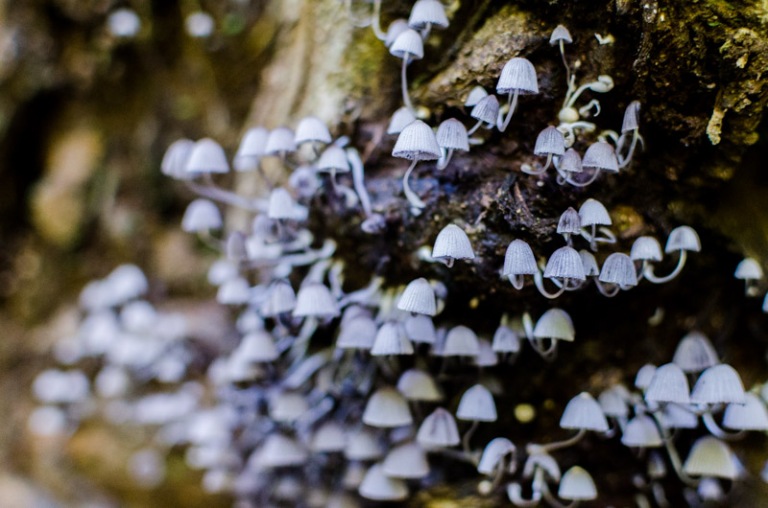 A green-backed mantella frog and two more I can’t identify followed by some fighting crabs:

We also saw some tombs which belonged to locals of a village on the mainland. Since the island has become a protected area, they no longer use the site.

Most of Madagascar has an interesting tradition, called famadihana or ‘turning of the bones’. Families exhume their dead from their crypt every two to seven years (the wealthier they are, the more often they celebrate; some people live in comparable poverty to prioritise tombs and famadihanas), when an ancestor’s spirit instructs a senior family member to do so. Then they celebrate with the decomposing corpse – eating, drinking, dancing and wrapping the bodies in new shrouds. Although in decline as Christianity grows, it is a customary belief that, after complete decomposition, spirits are finally free to join their ancestors. After the festivities, as the sun goes down, they are returned to their tomb – this time upside down as a symbol of the person entering the new world – and are buried with money and alcohol. Such joyful celebrations allow the living to show respect to their predecessors and provide occasions for families to gather. This connection is beneficial to the living because ancestors are believed to have the power to intercede on their behalf with god regarding events on earth.

Anyway, back to the land of the living! Night walks are forbidden in Madagascar’s National Parks so instead we took a walk along the beach and explored near to the camp, finding a wealth of nocturnal critters including our first mouse lemurs (not pictured).

I’ll begin with our favourite – the mossy leaf-tailed geckos which I became quite good at spotting! 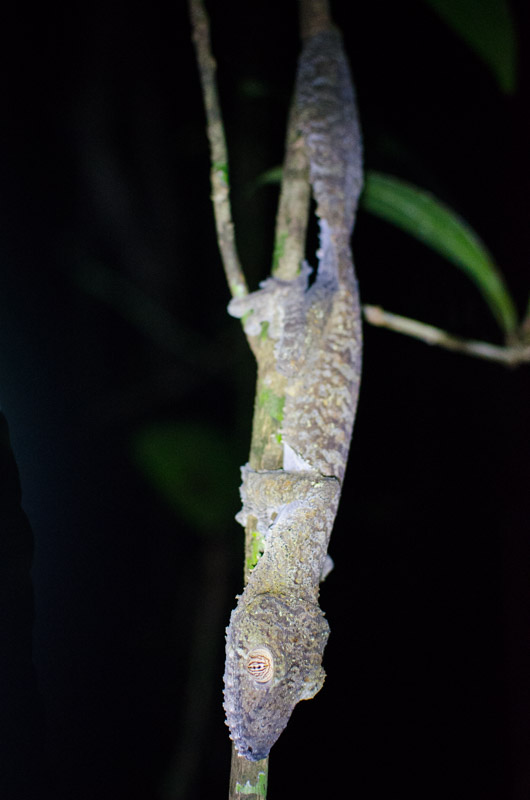 Then there was this lot which I can’t specifically identify except the fuzzy sleeping bird is a Madagascar pygmy kingfisher: 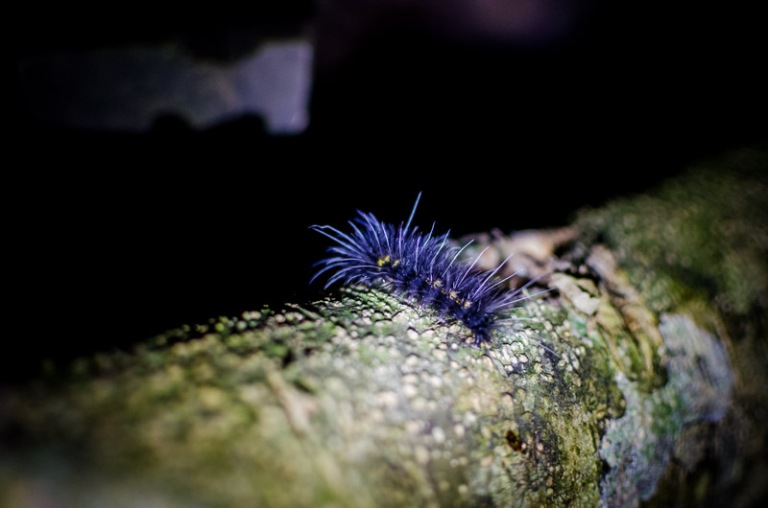 After a full-on day of three hikes, we were exhausted. As we admired the starry sky and climbed into our solitary tent, the thrill of being the only inhabitants of the island truly sank in! We slept well, despite the cold and the rainforest-damp sheets, lulled by the sounds of the jungle harmonising with the sea.

We awoke early the next morning to a new sound: rain. Not unusual in the rainforest of course, but it was the first rain we’d had in three days and we were incredibly grateful given that all our waterproof clothing was in our lost luggage. Even this shower didn’t last long and we were able to enjoy a more or less dry speedboat ride back to the mainland.

Back in Maroantsetra, with sadness, we said goodbye to our friend Augustin. Not only had he delivered on the wildlife front, but we’d had hours of interesting conversation with him – learning about Malagasy culture, finding out about his family, and comparing and contrasting our two countries. He’d been considerate, caring and had gone above and beyond to make sure we had a great experience. (Contact details of all the guides we used will be on a final post.) What a gem! 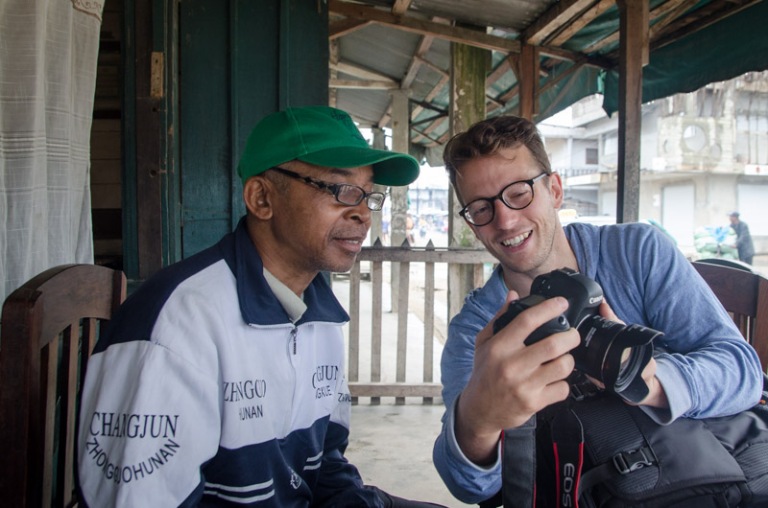 We returned to the airport – far earlier than necessary having been warned that planes sometimes depart early. After checking the departures chalkboard, receiving our hand-written boarding passes, and having our shiny new rucksack and ourselves weighed on the portable scales, we settled down to some zebu samosas (just as the pilots do) and watched the comings and goings of a small-town airport.

Eventually, ahead of schedule as we were warned, the luggage was trundled over to the waiting plane – this time a fairly ancient 21-seater. We were welcomed aboard and picked where we wanted to sit.

I alarmed my (very near) neighbour by offering her a Mento but, otherwise, it was a fairly uneventful snooze-filled 40-minute flight to Sambava. More on that next time.

If you missed the first instalment – Masoala National Park – you can read it here.

For all the practical information relating to this trip, including names and numbers, click here. 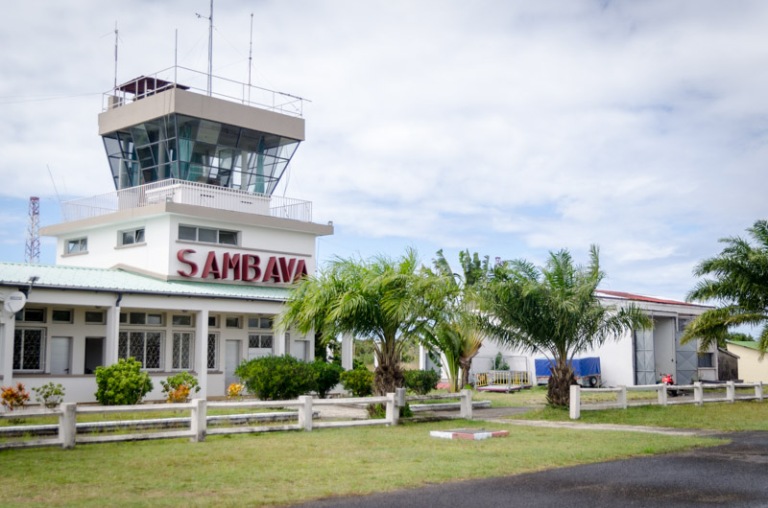