For my 30th birthday last year (in Chile), Dean bravely bore full responsibility for celebrations and did a marvellous job of making it special. So the pressure was on to match his efforts this year.

As ever, there were no gifts he particularly wanted so I decided to plan a surprise adventure for him. That would have been a bit boring to unwrap so he had to solve a treasure hunt in order to reach his prize. Ten cryptic clues around the house led Dean to his passport followed by an anagram and a code to break. This led him to a track on an Ella Fitzgerald CD: I Love Paris. Here are a few pics:

Dean had a few weeks to digest his other gift – a guidebook – as the trip was in the school half term break. On May 23rd, an unexpectedly comfortable flight deposited us at Charles de Gaulle airport where we battled a range of near-unfathomable machines to secure train tickets into the city centre and onto Montmatre, where we were staying.

I’d used Airbnb to book our accommodation which was a tiny yet perfectly formed, quirky apartment belonging to a man named Patrick. He showed us round, entirely in French – which fortunately we could understand – then left us to it. Our tourist-level spoken French used to be passable but, since spending five months in central and south America, all the words seemed to have evaporated and to have been replaced by Spanish ones. Awkward! 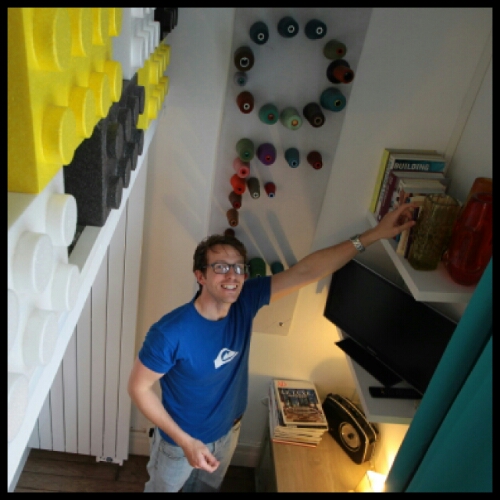 That evening we took a wander about the neighbourhood, enjoying a meat and cheese platter at La Souris Verte, and dropping in at the local supermarket for some supplies.

Day one was an ambitiously long riverside walk beginning at the lovely Jardin des Plantes and ending at the Arc De Triomphe. Being in the middle of the city, the gardens were very busy with locals and tourists, the gardeners chatting to visitors about the herbs, flowers and trees. The poppies were amazing!

Later we crossed the bridge to Île de la Cité, an island in the Seine. It’s full of cool little shops selling icecream, art, gadgets, macaroons, and jewellery. This was the church: 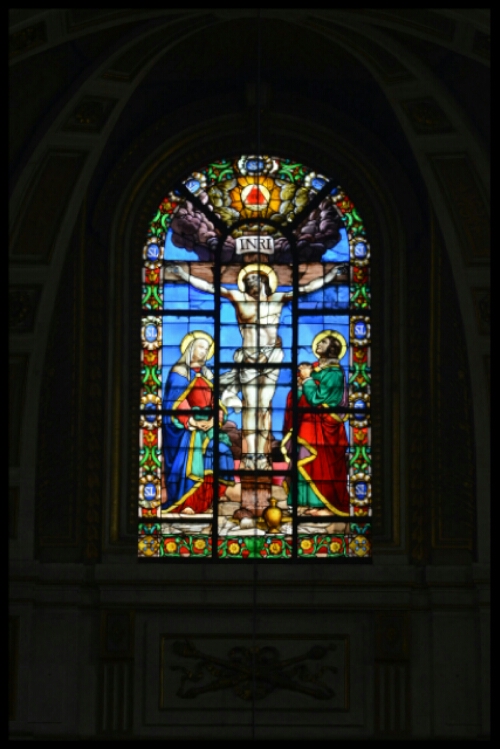 Notre Dame also sits upon this island. Our first sight of it was from the Pont de L’Archevêché, one of the bridges famous for being covered in lovers’ padlocks, the keys having been thrown into the river. We’ve seen loads of these bridges elsewhere on our wanderings but this was the first time we were simultaneously offered padlocks and pens by some enterprising individuals! So we joined in.

The day after we got home we read in the news that the authorities are about to take down lots of the padlocks due to them jeopardising the bridges’ structural integrity! 😦

Once we reached the large plaza infront of Notre Dame, we found the queue, huge but fast-moving. Inside was packed so we shuffled around with the rest of the crowd, snapping a few pictures here and there. 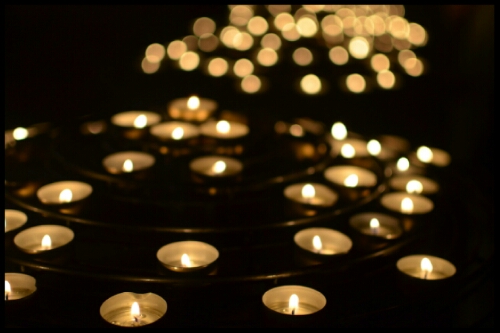 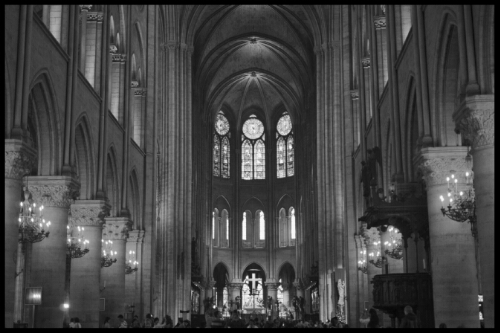 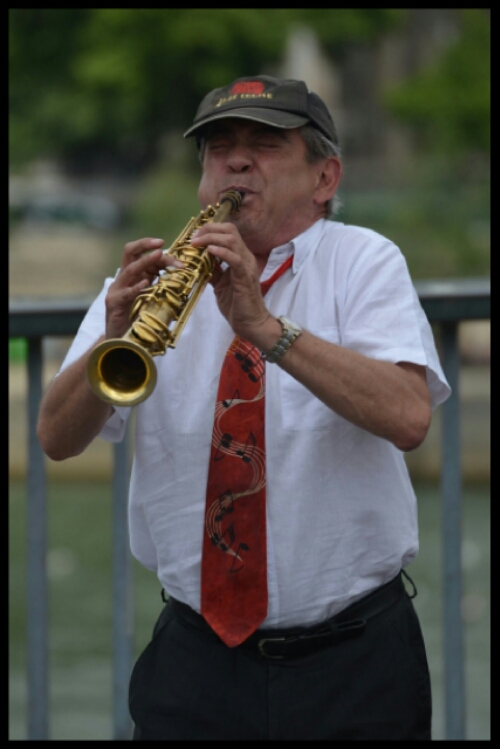 Weary-legged, we trudged onwards, through the Jardin des Tuileries, across the Place de la Concorde, past the Obélisque de Louxor and the amazing Grand Palais, along the tree-lined Avenue des Champs-Élysées, and eventually arriving at the very busy Arc de Triomphe.

The next day we visited the Louvre which obviously meant oodles more queuing (although, if you’re visiting, in hindsight we did work out a way to cheat the system!). 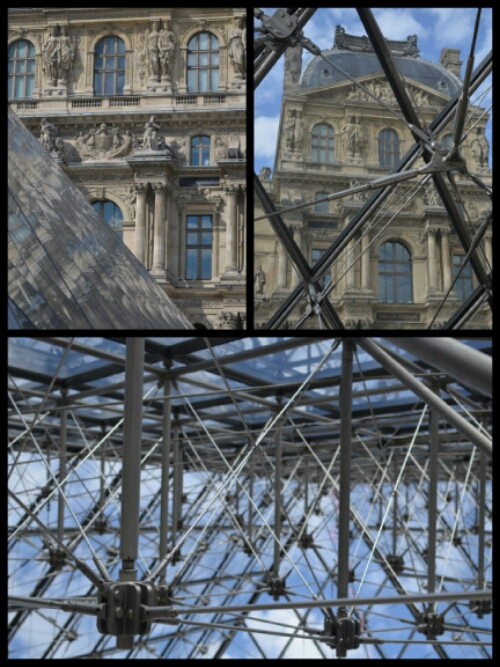 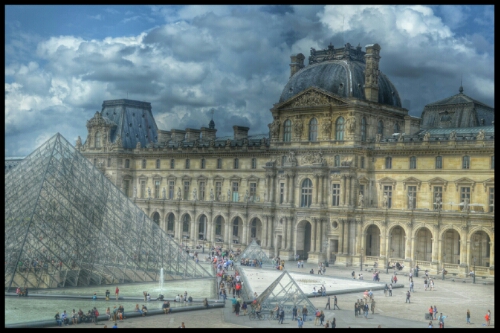 It’s a sprawling museum containing 3 million works of art and is housed in an ex-fortress complete with moat with the modern addition of the glass pyramids. Using the audioguide, we toured all the masterpieces including Venus de Milo and The Winged Victory of Samothrace.

And of course the Mona Lisa which is behind a glass screen and a rope and a couple of security guards. Bit over the top of you ask me!

Then we wandered around a bit more, saw the apartments of Napoleon III and lots of sculpture plus these wall carvings and giant winged human-headed bulls from an Assyrian court (which have five legs – four from the side yet still two from the front). 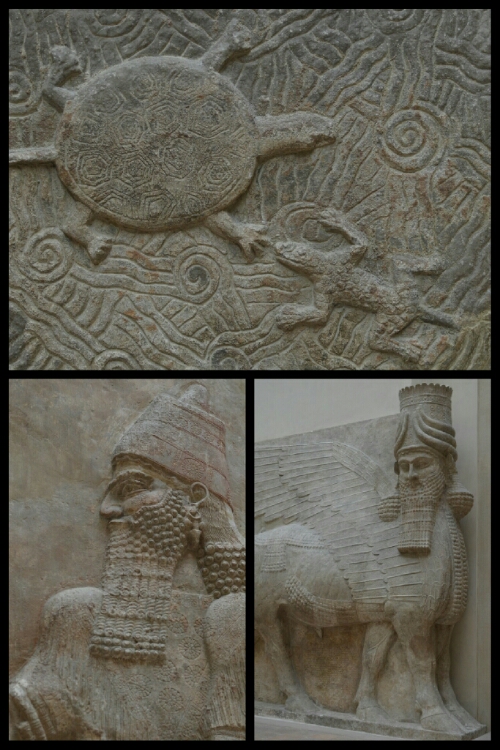 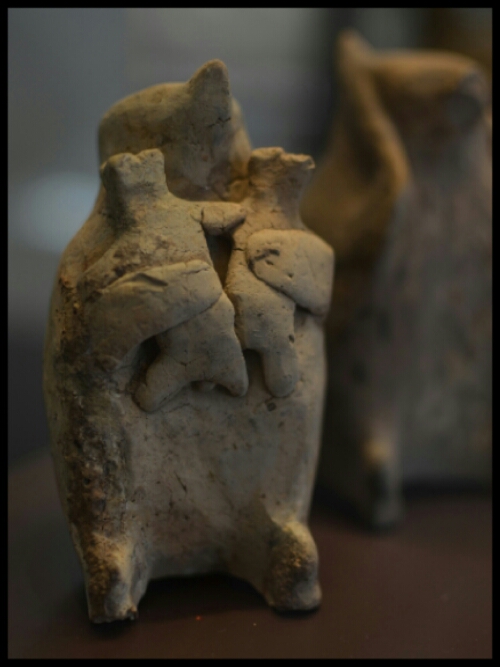 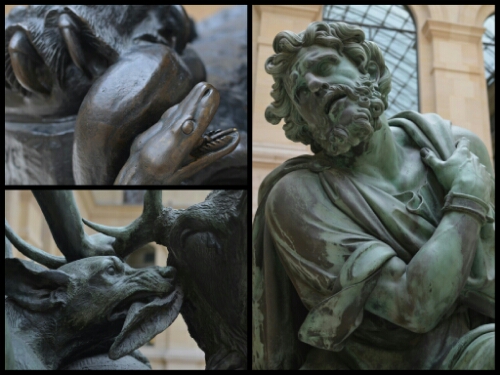 Day three was busier, starting with a walk around Montmatre. We saw the windmills, the graffiti, the crêpe shops and the street sculptures. 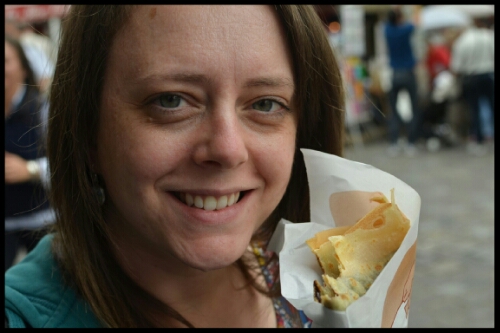 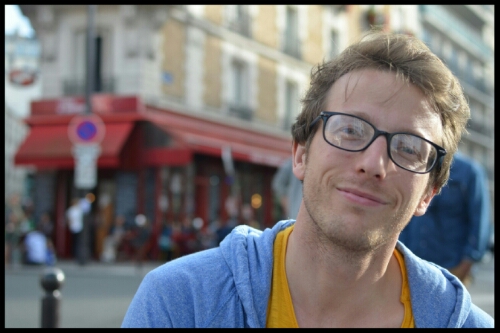 Our first main stop, on a street full of boulangeries, fromageries, patisseries and boucheries, was the cafe that starred in the film Amelie. We enjoyed a drink inside and then later spotted a grocer’s that was used in the film too.

In the centre is a square full of artists, portraitists and caricaturists, surrounded by bustling restaurants with identical tourist menus, one of which we foolishly sampled that evening! 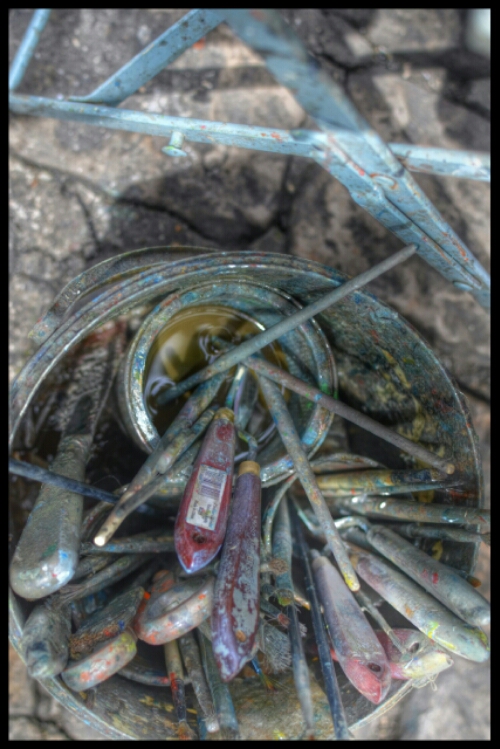 Eventually we wound our way to the Sacre Coeur, the famous church on the hill.

In the early evening, we paid our trip to the Eiffel Tower. Yes, more queues. And around about 700 steps! Our visit coincided with the French Open so there was a giant, unsightly tennis ball hanging in the middle of the tower. 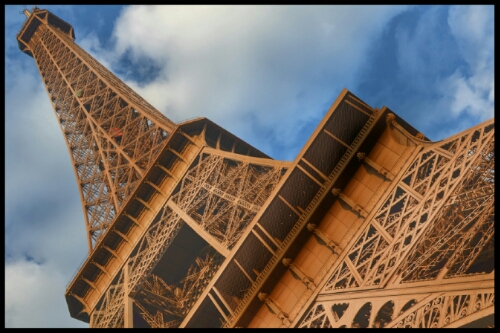 This one’s by Dean 🙂

To get to the second stage, we used the stairs then bought another ticket for a lift to the top – a first for me. As the tower is the tallest thing for miles around, the views are great. We could see all the places we’d visited in the last couple of days: the Arc de Triomphe, the Grand Palais, the Louvre, the Notre Dame, and the Sacre Coeur on a distant hillside. 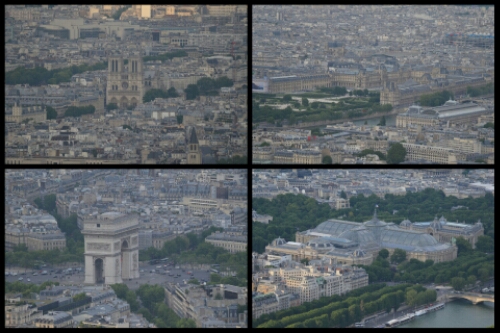 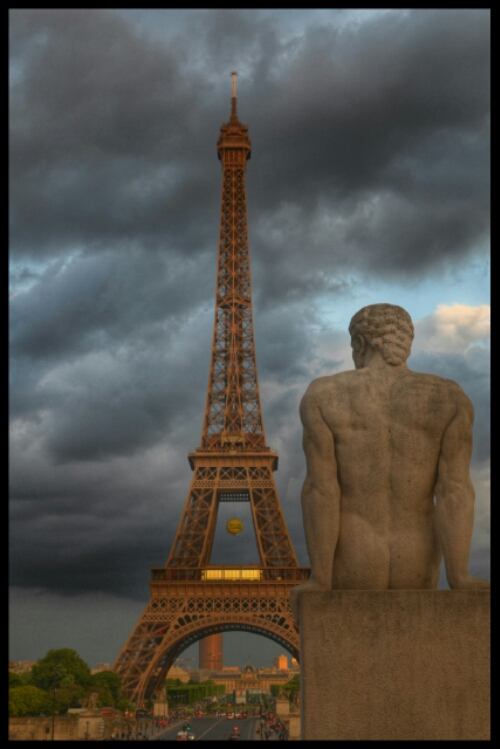 We were sad to check out of Patrick’s apartment having become quite at home in the area and enjoying our daily bakery breakfasts. 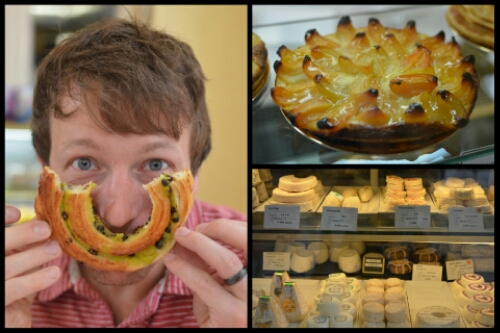 Deciding to spend the day at the palace of Versailles, we embarked upon a fairly complicated journey there and joined the line for tickets. The king’s bedchamber was the middle room in this picture:

Inside we used the audioguide to tour the sumptuous rooms including the hall of mirrors, the chapel, the world’s largest painting, and the suites of rooms for the king and queen. 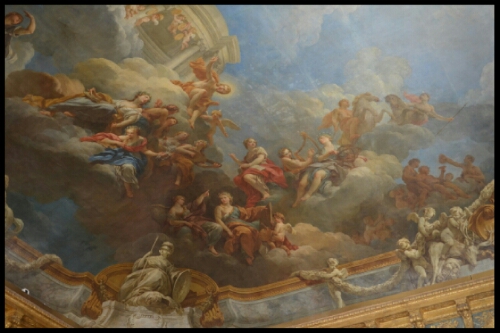 All the furniture was sold off at some point and, although some has been re-aquired or replicas made, it is quite sparsely decorated. Even so, as I love to do in places with such history, I enjoyed imagining all those royals who have lived their lives in the same rooms. Apparently the life of the king was so public that there were ceremonies for going to bed, getting up, and putting on and taking off his hunting shoes, open to the courtiers to attend.

And that’s your lot! For the first time since June 2013, we have no adventures in the pipeline! It’s not good! We’ll have to address that but until then…