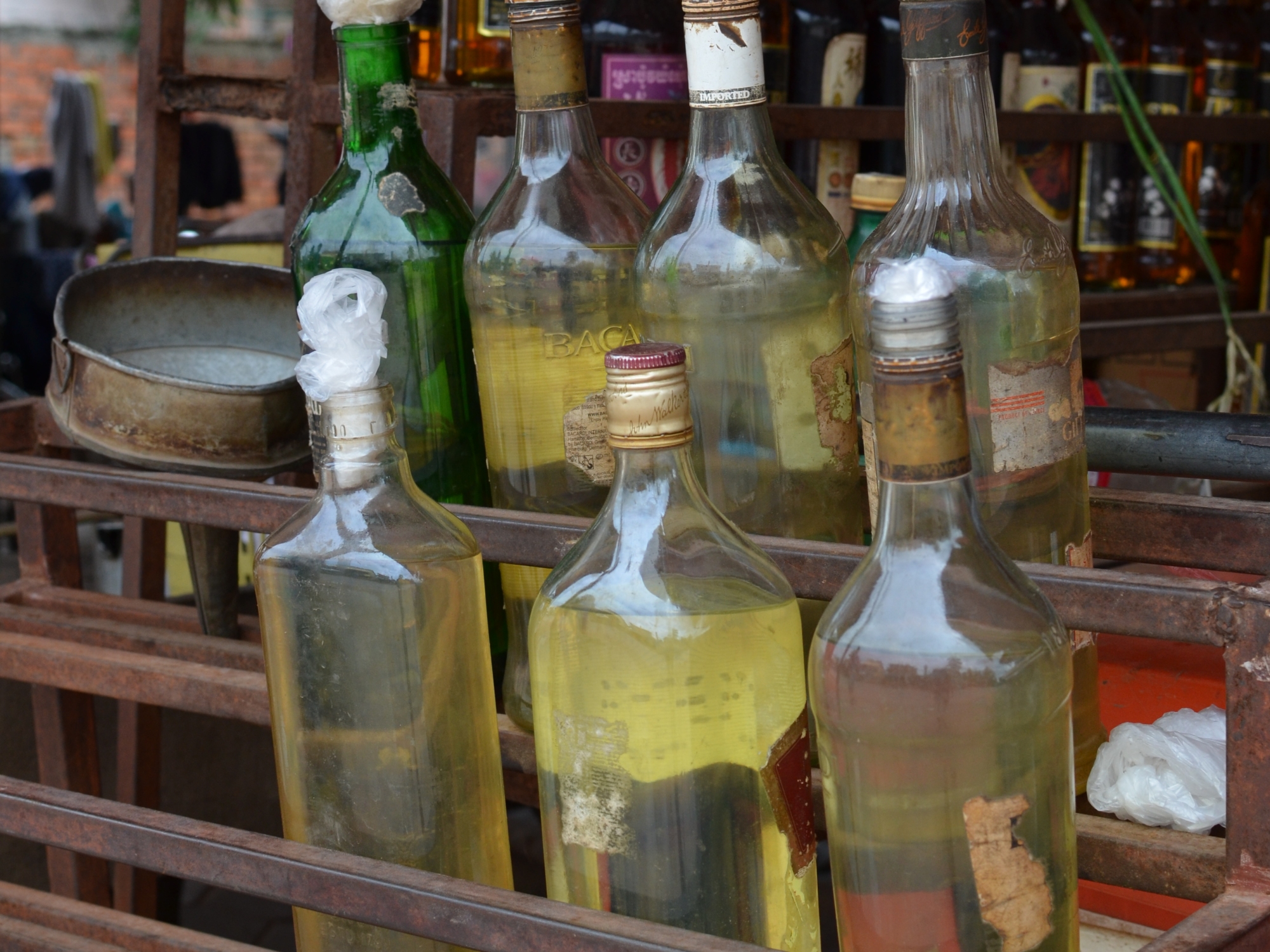 Throughout our wanderings we keep noticing odd quirky things which often don’t quite make it into blogs so I’ve been noting them down and thought it was about time I posted some.

★It doesn’t matter how hot it is, there will be people wearing jumpers,  cardigans, woolly hats and even balaclavas!

★Fried crickets, chicken feet and tarantulas are all sold as snacks.

★Motorbikes are transported in the passenger section of buses, and often there will be huge sacks of rice or other stuff stacked all down the aisle and boxes in every footwell.

★Petrol is sold in whisky and Pepsi bottles at road side stalls.

★Some people use massive corded house phones on buses.

★Hardly anyone puts litter in the bin in Cambodia, Laos and Vietnam.

★Families sit and do loud kareoke in otherwise deserted restaurants.

★Many women desire white skin so they use umbrellas in the sun and sometimes whitening lotion.

★The currencies of Cambodia, Laos and Vietnam contain no coins and you often find yourself dealing in millions of Dong or Kip.

★Depending on how you pronounce it, the same word in Vietnamese can have 6 different meanings.

★We have ice cream vans but in many of these countries there are mobile crepe makers, broom sellers, market stalls… anything that can be sold from a bike will be.

★Spaces between words is a loose concept in Laos and Vietnam, e.g. you may see Lon Don or pleasecomein, Hanoi or Ha Noi

★Occasionally I feel tall! Dean is a good head taller than most local people.

★Other than KFC in Vietnam, there are no Western fast food chains or coffee shops in Cambodia, Laos or Vietnam.

★Buddhist monks (all men are meant to be one at some point in their lives) don’t have to pay for anything, have seats reserved at the front of the bus for them, can’t make physical contact with a woman and aren’t supposed to eat after lunch.

★In Vietnam, it seems that if a person has a mole and that mole has a hair, it is allowed to grow and grow and grow. The most extreme example I have seen was a man on a train with a face mole sprouting 7 very long (8cm each I would guess) hairs!

★Many Lao and Vietnamese people bury their dead in their rice fields.

★Often on the streets of Vietnam and Laos you see one woman hunched over the head of another with tweezers. At first I thought they were finding headlice but now I think they might be extracting grey hairs.

★Thai, Cambodian and Laos TV shows – soaps and gameshows – are full of slapstick and ridiculous sound effects and everyone finds them hilarious.

★Since being married, Dean and I haven’t held hands in public as we haven’t been anywhere where it’s socially acceptable yet!

★In Thailand it is currently the year 2556 as they follow the Buddhist calendar.

★Petrol pump attendants are still very common which, to me, feels like a luxury!

★It is law in Thailand that there always be a teacher on site at school meaning there’s a timetable including weekends and holidays. Only men can do the nights: 6am – 6pm and they must stay awake and still have to teach the next day.

★Thai (and possibly other nationalities) think all white people are beautiful, largely because of their noses!

One thought on “Curiosities #1 – Laos, Thailand, Cambodia and Vietnam”