Costa Rica is lovely so far, lots of rolling green hills and it’s well set up for tourism which makes life easy. If you read my last post, I am pleased to report that a hot shower and a bug-free night or two were finally acquired and much appreciated!

We’ve spent our first few days here feeling rather chilly and drizzly in the high altitude town of Monteverde. There were two reasons for us choosing this destination: ziplining and the resplendent quetzal.

Ziplining was our wedding gift from Chantal and Wayne Moir and Mike, Helen, Hannah and Matt Rollinson. Thanks all of you! There are lots of companies to choose from but we booked our trip with Monteverde Extremo. I’d been looking forward to this adventure through the jungle canopy of Costa Rica since we first planned our trip, without giving much thought to the reality of it. There were 14 cables including 4 very long ones extending 1410 ft, 1275 ft, 1800 ft and 2250 ft. The heights of the lines were between 225 ft and 450ft and included aTarzan swing, a 90ft rappel and the ‘Superman’. These pictures are to give an impression of the scale though I’m not sure they do!

Fitted out with a harness, helmet and some very heavy duty gloves, we had a short safety briefing then climbed a metal staircase to the first line. It was a fairly short one and not very high up which was a good introduction. The lines got progressively longer and higher; some we did alone and a couple we did in tandem which was really fun.

The feeling of sailing through the air, so incredibly high above the ground, was exhilerating. Several of the lines were long enough that you could almost relax and could take time to survey the miniaturised landscape far below. For me, the only daunting part was being responsible for stopping myself which was done by pulling down on the cable with my right hand. Telling myself that the harness and cable would hold me was easy, but being sure the friction wouldn’t burn through the glove at such speed was quite a different thing! 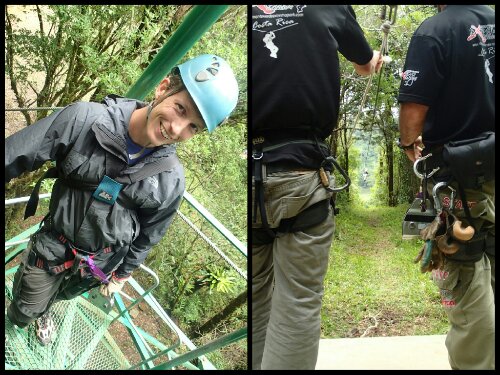 Three lines got my heart pumping far more than the rest; as I said, I hadn’t really stopped to consider the realities of what we were doing. The first was the ‘rappel’ which we thought was going to be a simple abseil – not daunting for people who can climb – but when I reached the edge of the platform I realised the employees just let you down in one very quick descent. There wasn’t really an option to not participate so I asked them to let me go more slowly than I’d seen others go. They did, then sped me up at the end. The build up was definitely scarier than the reality in this case.

The second challenge was the Tarzan swing where you basically jump off a platform (bungee style – something I would never dream of attempting) then before you hit the ground you swing, as if on a vine, what looks and feels incredibly high in the opposite direction. Again, just jumping into nothingness was pretty scary: so much so that I was literally too scared to scream. I just held my breath! However, once I figured out I wasn’t going to collide into the landing platform, I actually really enjoyed the swinging! Watching Dean’s turn was nearly as bad.

The final and, for me, most adrenaline pumping stage of the course was the ‘Superman’. Our harnesses were altered so that we could be strapped to the zipline hanging horizontally below it with our feet suspended in rope loops. I’m not sure about the length or height but both were certainly ‘extreme’! It was impossible to see the other end. The scariness at the start, gazing down over the tiny trees and vast expanses of distant grass, was soon replaced by the sheer exhilarating enjoyment of soaring like a bird so incredibly high up. The duration of the flight and having my hands to my chest (instead of worrying about braking) meant that it was far more relaxed than the other lines and it was possible to look around more, absorb the sensation of flying, and really appreciate the view.

We were instructed that as we approached the end we should put our arms out to the sides, presumably just for photographic purposes. I duly did so but, as the picture was taken, I think it was dawning upon me that I knew I wasn’t responsible for braking but that I had no idea what was! It turned out that some device stopped me with a painful jolt, just short of the finishing platform so it was all OK 🙂

This adventure was sandwiched between two much more sedate visits: to a ranario. I don’t know if this is a Spanish word or a scientific one but basically it was a place with lots of frogs! I really love frogs but the only ones we ever seem to find on our wanderings are quite boring-looking ones. I’d got images in my mind of them all hopping around free-range in this ranario but alas, they were in glass-fronted display boxes (ranariums?!) which were fortunately very spacious and full of healthy-looking vegetation and sometimes ponds.

The reason we went twice was to see them in the day time and then again at night. On the second visit they were, as promised, far more active and, with the use of torches, really easy to find and photograph. I’ve got no idea what species most of them are except for my favourites, the red-eyed tree frogs, at the end. Despite being emblematic of Costa Rica, they’re not actually endemic to this cloud forest. You might need to turn up your screen brightness! 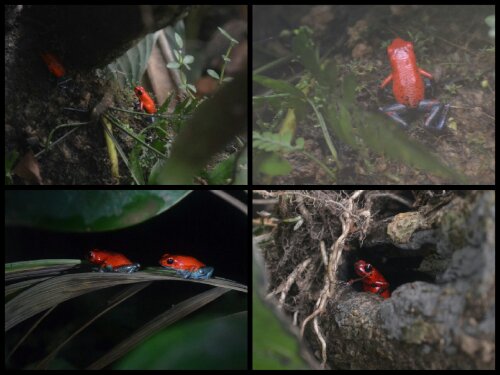 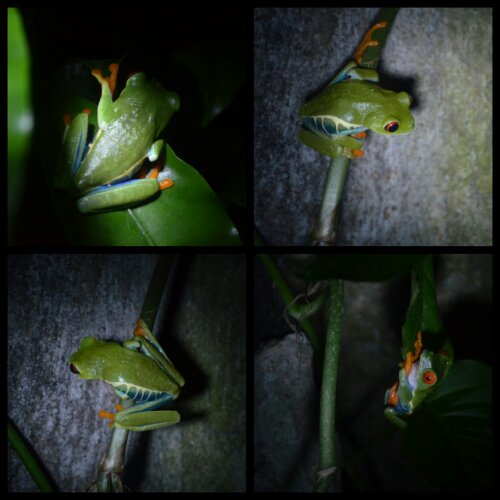 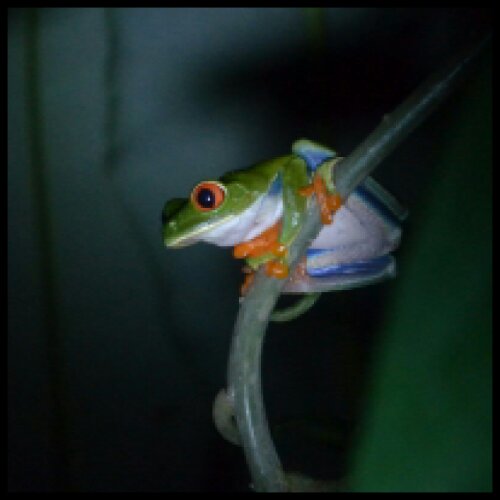 Not a frog, I know, but whatever it is, its eye is marvelously blue!

As I said at the start, the second reason for visiting Monteverde was to try to hunt down the elusive and beautiful Resplendent Quetzal. They’re classified as ‘near threatened’ because of loss of habitat but are protected by many places like the Monteverde Cloud Forest Reserve.

It might seem a little over the top but, when you know an animal like this is nearby and see-able, you can end up feeling compelled to go to great effort to catch a glimpse of it. For us this meant not one but two 5:30am starts and using our wedding gift from Lesley Winfield to pay for a guide, Elbertho, to take us hiking in Curi-Cancha reserve the first day (no joy!) and Monteverde Cloud Forest the second day. Here, at last, we saw a nesting pair and were able to view and photograph them through Elbertho’s telescope. They were truly wondrous and definitely worth the effort! 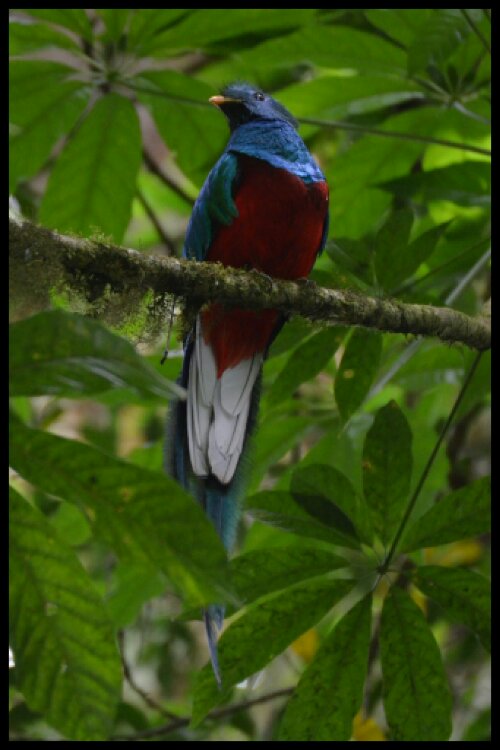 There was also an area with loads of hummingbirds – at least eight species – so here are a few snaps. They’re so colourful! 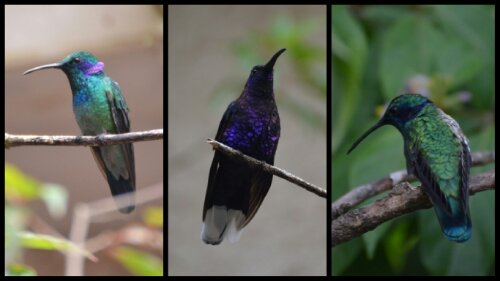 We also climbed up the inside of a strangler fig tree whose victim had long since died! 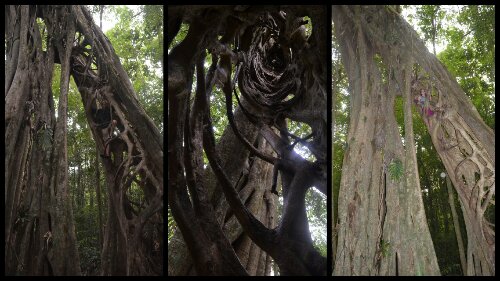 Currently we’re in the capital, San Jose, for a stop over on the long journey to the Caribbean coast. Tomorrow’s leg involves 2 buses and boat to reach Tortuguero where we’re hoping to see some nesting turtles!